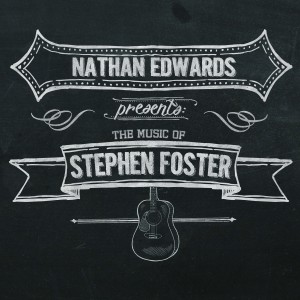 In 2011, DIY singer-songwriter Nathan Edwards released his full-length album ‘New Season’.  While not always perfect, it featured music delivered straight from the soul, its pastel shades often gently uplifting.  For his second release, Nathan explores a few songs from the catalogue of Stephen Foster, a man credited as being the “Father of American music”.  Foster’s catalogue of songs is centuries old – and the weariness of age and the heartfelt nature of some of his lyrics are both well suited to Nathan’s own sense of warmth.

The first track, ‘I Would Not Die In Springtime’, in fact, would have fit the mood of ‘New Season’ very well.  Accompanying Edwards’s soft vocal tones an old-fashioned organ lurks in the back, colouring the arrangement in an understated way that would befit The Band’s Garth Hudson, while upfront, Nathan’s wife Cassie adds an excellent harmony voice.  The simplicity of Foster’s original tune combined with an early seventies folksy appeal from both members of the Edwards family ensures that while this tune was written centuries ago, in folk music terms, it retains a near-timeless wonder. Tackling one of Foster’s better known songs, Edwards’s take on ‘Old Folks at Home’ blends a soft harmony vocal and an equally soft acoustic arrangement, settles for a sound that’s similar to classic James Taylor and other slightly syrupy early 70s singer-songwriters (the kind of sound Quakers on Probation aimed for regularly and failed at, at almost every hurdle).  This could be written off as schmaltzy by some – and you wouldn’t necessarily be wrong, per se – but Edwards lifts the performance by peppering the tune with some excellently played lead work throughout; his hard-plucked acoustic strings have a brilliant tone with a slight influence from WG Snuffy Walden.

A similar approach drives ‘Jeannie With The Light Brown Hair’.  The lead vocal has a natural power, but the bulk of this tune is not necessarily the album’s most interesting.  However, a twin guitar arrangement offering a couple of well played leads lifts things considerably.  Slightly sparser in part, a slow arrangement of plucked strings and bass sounds provides the basis for ‘Nelly Was a Lady’, which once again finds Nathan and Cassie singing in a faultless duet.  Cassie’s soft but rich voice compliments Nathan’s natural tone well, and as with most of the material, it’s the richness and depth of those voices that helps make the material so appealing; in some ways, the choice of musical arrangement is less important.

A slow and somewhat restrained run through of ‘Oh Susannah’ retains all of the homespun warmth of the other performances – a solid acoustic line in the right channel, a gently crying electric lead in the right – peppered with a little banjo and some lovely harmonies.  Despite a great arrangement, it somehow comes across as this disc’s weak link, perhaps due to the song being over-familiar.  If nothing else, it’s still far more user-friendly than Neil Young & Crazy Horse’s ragged rendition from 2012. The intro to ‘Hard Times Come Again No More’ features some hard acoustic sounds delivered with a easy slide of the fingers – again, it’s hard not to think of the excellent Snuffy Walden, especially during a brief solo – while elsewhere, finger-picking provides a blanket for an equally soft and appealing vocal.  Just as the organ had provided a little musical colour on the opening track, that role here is handed to a sparsely played violin, interesting enough but never tempted to upstage the vocal in terms of the main melody.   It’s a simple, somewhat wistful number, and yet it sounds so complete.

As it stands, this disc may not be the most musically varied, but it includes some excellent performances.  It may have been better yet if Nathan had chosen another lesser-known composition to replace ‘Oh Susanna’, but at least he stayed clear of the overtly jaunty ‘Camptown Races’ – that surely would have jarred among some of this more melancholy material. Although only eight songs in length, ‘The Songs of Stephen Foster’ wisely follows the maxim that less is more.  It’s better two have eight fantastic performances alone than it is to pad things out. It’s to Mr. Edwards’s credit that, given the broadness of the Foster catalogue, he could settle for this slim volume knowing he could do his utmost to make the release not only enjoyable, but perhaps leaving his audience wanting a little more.

With eight numbers of a pastoral nature, ‘The Music of Stephen Foster’ can be streamed/purchased from Nathan’s Bandcamp link below.