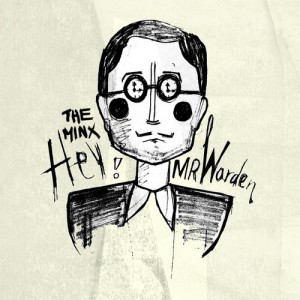 With a distinctly northern approach to their sound and boundless levels of energy within their arrangements, a few may hear traces of early Arctic Monkeys within this debut EP from The Minx.  Far stronger than that, though, their love for Buzzcocks within the ranks of this Manchester based band shines through.  The music may possess slightly less of a punk edge than anything Shelley/Diggle recorded back in the late 70s – largely down to huge waves of Dave Greenfield/Clint Boon influenced keys – but the Buzzcocks’ lasting influence in the sheer energy and snotty vocal is unavoidable.  [Also, is the oddly placed exclaimation mark in the EP’s title a gentle homage to The Fall?]

Having attracted attention from the BBC’s Steve Lamacq, the lead track ‘Forest Bank’ shows the five musicians to be more than reasonably gifted, particularly the rhythm section of Andy Evans (drums) and Steven Stuttard (bass), who play off each other throughout, with Evans offering some excellent hi-hat fills that only increase the feeling of energy.  The chorus line is simple and a little repetitive (in a good way) with elongated syllables allowing Chris Haddon to tap into his best Pete Shelley-esque drawl.  Better still, ‘Walking On My Grave’ juxtaposes a youthful sneer with a lyric concerning “pesky kids” and is clearly the viewpoint of someone from an older generation.  Musically, this is The Minx’s finest three minutes – the hi-hats are in full force against a pumping bass, while the rest of the band settle into an upbeat groove that owes a fair debt to the early Inspiral Carpets.  If you like either the Carpets or Buzzcocks (preferably both), this is a number to check out ASAP.

‘Out The Other Ear’ is a tune that occasionally posses more than a hint of ‘Dagenham Dave’ by The Stranglers, although this is purely down to Kieran McIntyre’s swirls of organ filling the choruses.  Between an almost funky bass riff and huge swathes of organ, there’s plenty here to entertain. Guitarist Paul Robinson lays down some trebly sounding chops, over which the bass and drums dance gleefully, while the vocals – as per the norm – have a big presence. Haddon mightn’t be the best singer, but as a vocalist, his shamelessly naturalistic approach works perfectly for the material.

As far as debut releases go, these guys manage to make their musical intentions crystal clear and with the minimum of padding during these three songs.  If you don’t like really northern sounding vocals and sneering then, obviously, give The Minx a wide berth…  As for everyone else, it’s likely you’ll hear the beginnings of something throwaway but enjoyable, as these tunes show great promise as they vigorously bristle along.