In an age where band’s debut albums are expected to be an instant hit or record companies drop them like a lead weight, it seems inconceivable that, at the beginning of 2013, Brad are celebrating over twenty years together.  An on-again, off-again project for Pearl Jam guitarist Stone Gossard, Brad have always received mixed feelings from PJ fans, but those who love the band really do love them.  Perhaps more inconceivable is the fact that – despite their 1993 debut ‘Shame’ retaining a special place in the hearts of their fans – it took the band two decades to embark on their first full European tour.

Two of the band’s three UK shows sold out quickly.  For the last of these – the London show – there was a real buzz from the second the band set foot on stage.  With blue, moody lighting, the first notes of ‘Buttercup’ greeted the crowd like an old friend; the first sounds of the Brad live experience naturally mirroring the first notes most people ever heard from this great band.  From the second Shawn Smith sang the opening lines behind his piano – and from underneath the hat obscuring part of his face –the audience are spellbound.  This gentle command of his audience never wavering for the band’s ninety-plus minutes, cutting a huge figure on stage, Smith has both a very strong physical and emotional presence.  His gently spoken manner oozes charm, whether dealing with hecklers or acknowledging the audience or bandmates. Despite never saying too much, on this particular evening, there is more stage presence from this band – but Smith, in particular – than some artists could ever have. 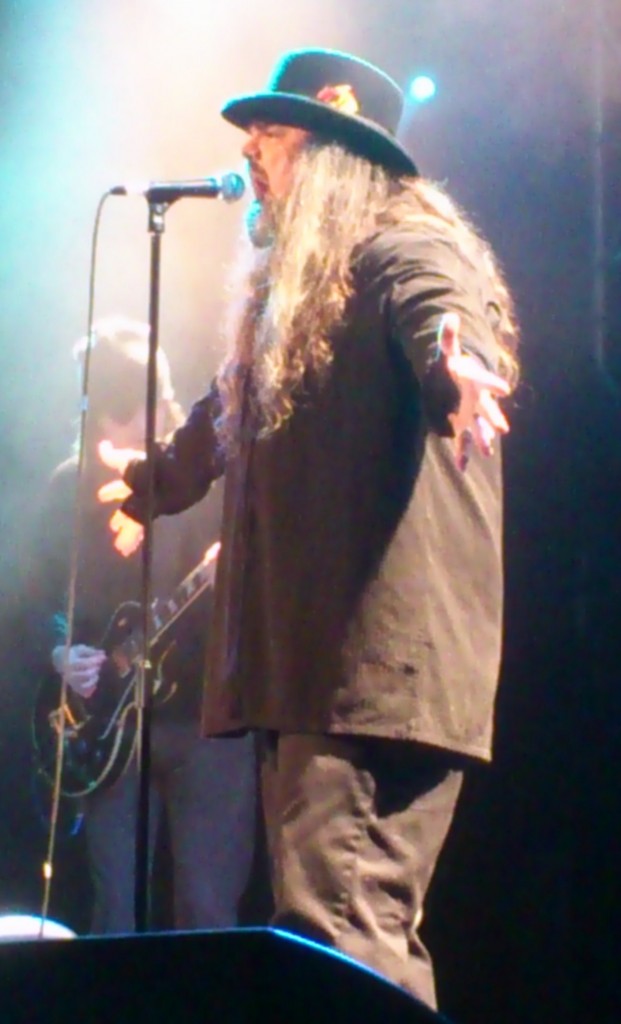 ‘Buttercup’ set the mood, but some of the following material appeared equally as commanding, as Stone Gossard delivered hefty chops on guitar oriented pieces ‘Secret Girl’, ‘My Fingers’ and ‘Waters Deep’, as well as taking lead for a rather atmospheric performance of ‘Desenfando’.  Although Gossard’s standing as both songwriter and musician cannot be questioned, it’s when Brad soften and Smith leads with the piano the band are at their most distinctive.  From that perspective, near-faultless, bass-heavy renditions of ‘Good News’ and ‘Screen’ – the latter arguably gaining the biggest response from an already enthusiastic audience – presented the band at their most epic.

Nestled between the fuzzy guitar rock tunes and moody piano driven pieces, Brad’s first single ‘20th Century’ has often felt like a musical cuckoo in relation to the rest of ‘Shame’.  Its funky grooves having far more in common with Smith’s prior work with Pigeonhed (with producer Steve Fisk), yet, as part of the live set, it truly works.  For this particular performance, the band are on fire.  Bassist Keith Lowe’s playing has a hard edge which brings Jeremy Toback’s original part to life, over which Smith adds semi-improvised piano parts to an extended jam.  Maybe this is no different from many Brad performances US audiences have enjoyed over the past two decades, but during this particular moment, ‘20thC’ had a confident mood which could have stretched out much longer.

With Brad barely putting a foot wrong during the course of their sixteen song set, they could have said goodnight without an encore and most people would have been happy.  Twenty years is a long time to wait after all, but somehow, for a six song encore, Brad were even stronger.  Having used just over an hour to more than warm up, the encore began with Smith alone at his piano.  What ensued was undoubtedly the most unexpected part of a night that, for some, had already been heralded as an unexpected gig…  Tapping into his emotional side, Smith delivered beautiful solo renditions of Satchel’s ‘Suffering’ and his own ‘Wrapped In My Memory’, dedicating the latter to departed Mother Love Bone man Andrew Wood, before playing his own interpretation of Wood’s own ‘Crown of Thorns’.  A tune already etched into the psyche of most Pearl Jam fans, but after this tour, it is likely to mean so, so much more.  Even the injections from a few hecklers could dampen this intimate moment, Smith dismissing them with a friendly off-the-cuff response where necessary.

The final part of the gig saw the whole band offering the often-overlooked ‘Lift’ and a spot-on version of ‘The Day Brings’ (still easily the strongest track from Brad’s second album ‘Interiors’), before climaxing with a spirited take on The Rolling Stones’ ‘Jumping Jack Flash’.  Since that provided a natural end to the performance, it was somewhat surprising to witness Smith take his place back at the piano, breaking into ‘Buttercup’ immediately after.  The second performance of this signature tune stronger much than the first, the audience truly caught in a moment, the band sounding tighter, the end of the gig bringing us full circle.

Twenty years…though strangely, about halfway through, there was a sense of familiarity as if Brad had always been a part of the gigging history of the thirty/forty-somethings who made up most of the crowd.  With such an enthusiastic response, let us hope that’s not the last we see of Brad in the UK.  In fact, let us hope this experience was positive enough for Mr. Smith to bring Pidgeonhed, Satchel and his solo material to European shores.