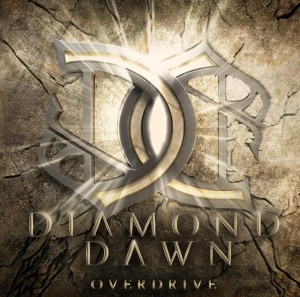 ‘Into Overdrive’ kicks things off with a blanket of pompy keyboards turning out a busy-ish riff.  Before long, the band settle into a mid-paced groove; the guitars are melodic yet chunky, but it’s Mikael Planefeldt simple bass line which pulls everything together.  Like Survivor at their best, it comes with a walking pace (though walking through warehouses while wearing a beret is strictly optional); there’s nothing flashy here, just good, heartfelt playing.  The chorus is a big affair – complete with key change – and the band gets to bring out the big guns with some great harmonies.   …And that pompy keyboard riff that just seemed bolted on to the tune by way of an intro?  Surprisingly, Niklas Arkbro can be heard beavering away under the harmonies, making it fit where, at first, it doesn’t always seem completely comfortable.   The guitarists get a brief time in the solo spotlight too, which is only fair, and their playing appears very empathetic to all the other elements around them.  At the point where it feels as the band should be pulling the tune to a finish, there’s a brief bridge section with a couple of unexpected stops, before the band wheel out the chorus one more time – just to make sure it’s gone in.  Despite possibly feeling one chorus too long, it sets out the band’s intentions very clearly.  It lays their strongest influences on the line, shows how well they can play, and most importantly, proves they can write strong songs in the old-school melodic rock tradition.

With more influences from other classic bands of decades past – but most obviously Survivor, once again – ‘Take Me Higher’ is one of ‘Overdrive’s unmissable tunes.  For some people, this perhaps would have provided a more instant opening statement, since it takes each of the tried and tested hallmarks of eighties rock and wheels them out one at a time with great end results.  The keyboards are dominant, and while not of the preferred “stabbing” variety, bring a classic AOR presence via some huge chords.  As you may expect, occasional lead guitar accompaniment comes with a near perfect blend of staccato riffs and soaring notes – thus making certain that most genre buffs will find something of enjoyment here, but as with all great melodic rock, the clincher is in the chorus.  Harmonies present, correct and well delivered, even Alexander Strandell’s lead vocal is a little softer than before, while the relatively simple tune and hook ensures a certain memorable quality even after a short time.  Yes, you’ve heard it all before, but frankly, Diamond Dawn have written a corker here.

The brilliance of that track carries over to ‘Cryin’’, where the band offer another well-structured harmony filled chorus over choppy rhythm guitars.  The opening riff shows a softer side to Diamond Dawn, as keys tinkle away and Strandell pulls the best from his slightly accented voice.  He has as much power in his delivery as on the previous tracks, but by pulling it back just a little, he somehow has more presence and gives the sense that he has a decent vocal range.  With the rest of the band crashing in, the tune eventually becomes another slab of AOR with hints of Frontline, Jeff Paris and Takara. Also not bringing any real surprises, ‘Give It All’ still pushes all of the right buttons: the lead guitars are hard-edged but always retaining a strong melodic bent, while the lead breaks are meticulous.  Whether Jhonny Goransson and Olly Lindahl are playing in a twin lead formation or separately, they never overplay anything, while the sweeping lead notes – of which the lead break here has plenty – are very pleasing to the ear.  The album’s big ballad ‘Don’t Walk Away’ (classic title) has a cleaner tone, with the keyboards and vocals gently filtered, although this doesn’t especially soften Strandell’s accent.  Looking past that accent, he delivers each line powerfully, wringing the best from the huge notes, sounding emotional but never overwrought.  The band, meanwhile, go about their business in a similar fashion to before, although there’s a couple of key differences:  a mechanical bass/keyboard heartbeat midway recalls ‘Hysteria’-era Def Leppard, while some of the cleaner lead guitars add a Toto-esque hint of jazziness – both welcome additions to Diamond Dawn’s repertoire of largely pilfered sounds.  [Remember, with AOR, a really obvious set of influences isn’t always a bad thing, especially if those influences result in a set of songs as good as these.]

The albums only misstep comes from punchy rocker ‘Turn It Up’, as the band shift the focus away from the previous stabbing keys and soaring guitars, in favour of a tougher approach, resulting in some slightly macho, but slightly embarrassing fist-clenching hard rock.  Sure, the guitar playing’s solid enough and there’s enough energy here to make it all seem heartfelt (plus enough cowbell to put Tommy Lee to shame), but the various clichés about volume and rocking are just a bit cringe-worthy.   [See also ‘Rock On The Radio’ by Firehouse and various tunes by Keel].

Overall, with at least a half-dozen gold standard songs among its number, ‘Overdrive’ is a very good album indeed.  It may not bring anything remotely new to the much loved melodic rock world and the slightly accented vocal won’t necessary appeal to everyone, but it’s a great first outing.  If not up there with the 2012 debut from fellow Scandinavians Wigelius, it’s certainly one which AOR fans should seek out.