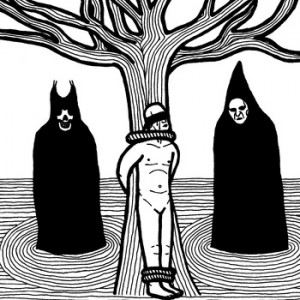 From out of the silence, a lo-fi bass chord emerges.  Then another.  Then a couple more.  The quiet bass rattles gently for a while building expectation, yet giving little to no indication of what is to follow.   As the drums appear, a stoner-ish vibe sets the pace before a heavy syncopated beat takes hold – one which is easily comparable to the darker, moodier works of Primus.  …And for some, those funky few bars, will come to represent the most accessible part of Cattle’s self-titled EP.

Swiftly moving on from the heady rhythms, the Leeds based trio push ‘Rockets’ into much more aggressive territory from there on in.  The quasi-funk bass gives way for hugely overdriven noise-rock bass, heavily distorted and with the presence of a truck, while the vocals scream almost incomprehensibly like The Jesus Lizard’s David Yow.  With no guitarist present, most of the grooves are left in the hands of bassist Tom, a man who also has connections with Super Luxury – and whose playing is awesome on this opening number.  The enormous fuzzy bass buries its way into your skull as vocalist Chris yelps “we can’t help you” repeatedly.  Shifting up a gear at first, ‘Whoah Bessie’ utilises a high toned bass in its intro almost in a way which allows the listener to (briefly) forget about the lack of guitar, before plowing headlong into a huge stoner riff that’s nearing something truly epic.  The flashier elements eventually subside and Cattle settle into a slow, powerful doom laden mood which has the feeling of something which could go on forever.  Again, the vocals yelp and scratch as if they’re coming from a man amid a crisis, while and huge echoing drums are given a proper live quality thanks to the band’s insistence on a small budget and DIY recording techniques.

Almost passing as light relief in Cattle land, the short ‘Sun Fangs and Wide Eyes’ has a touch less bottom end, more of a mid-paced attack and more of a stoner rock groove.  With a tune centred around a solid drum part, a love for The Jesus Lizard rises to the fore.  Toning down the bass, harmonic notes compliment a slightly quieter voice, before the band revert to the kind of distorted noise-rock sounds which powered the previous numbers.  Pulling each of their strongest elements together for ‘Pyramid Shaped Hole’, Cattle go all out on their closing statement.  Although there are a few quieter and more atmospheric sections, the lion’s share of this five minutes is concerned with drummer Ant smashing his kit with maximum intent, while Tom grinds at his bass, mixing dirty bottom end, and complex rhythms with touches of feedback with great results.  This is perhaps one of the finest exponents of noise-rock/avant guard noise making this side of Mike Patton’s Ipecac label.

This EP is, frankly, one of the best slabs of noise-rock ever, its short playing time only serving to heighten the overall impact.   Between the enormous basslines and wilful, arty clanking, Cattle are a force of nature.  Simply put, those who enjoy the works of The Jesus Lizard, Melvins, Cows, Big Business et al should listen to this band immediately.