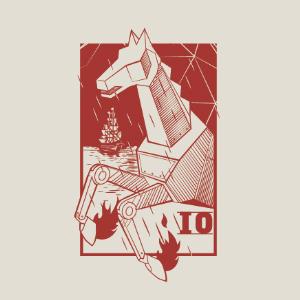 Now, here’s something rather special.  This third release from Brummie math metal band IO brings enough heavy intensity to satisfy most open-minded metalheads while, lurking beneath the surface, their sound retains enough clunking, grinding and, frankly, epic discordance to attract those who love the noisier end of alt- and post-rock.  Looking at each of their sounds and influences individually, you will surely have heard each of their tricks and traits from other math and alt-rock/metal outfits, but these guys combine each of those in a way which makes their complex sound far more compelling than most other bands working within a similar musical framework.

‘The Lost Cosmonaut’ starts off with a huge drum sound split between the left and right channels combined with an equally big guitar riff which gives the feeling of an unheard Tool recording, before falling away to reveal post-rock style discordance and a screaming vocal.  The math-metal influence at once becomes far more insistent than the tunes progressive metal beginnings, but there’s an all-round tightness at play that carries the piece no matter which direction IO decide to try and stretch it.  Despite the riffs – and Dave Wright’s immense drum parts – taking up most of the arrangement, a screaming voice cuts through the various complexities, bring a greater feeling of bands like Bring Me The Horizon and the heavier end of In Flames.  At the point where things appear to be in danger of repeating themselves unnecessary, IO tacks on a lengthy and atmospheric coda.  Most of the riffs subside, while over a simpler time signature the band adopt a few “la la” vocals and top everything with tinkly bell percussion sounds.  This opening number may sound at first like two or three ideas cemented together, but it really works, eventually sounding greater than the sum of its constituent parts.  At first, ‘The Cisco Kid’ sounds as if it’s eight minutes are going to be devoted to similar musical hallmarks as it begins with sledgehammer riffs and another intensely shouted vocal, but then, it swiftly branches out into one of the album’s finest arrangements.  In a way which wasn’t even hinted at previously, the first chunk of this tune works around a near circular riff, with multi-tracked guitars almost having a repetitive hypnotic effect.  Following this, something even more magical happens as the band work through an instrumental section where the drums lay down an almost funky groove and – for a while, at least – the twin guitars of Al Lawson and Stu Atkins seem happy to follow, before pulling away for something far more intense.  Overall, the instrumental parts of ‘The Cisco Kid’ could almost be the work of a different band to ‘Cosmonaut’.  Imagine ISIS with occasional input from the heaviest works of Leicester post-rockers Maybeshewill (but with vocals) and that may provide a useful – if not entirely accurate – reference point.

Taking a step back, ‘Vultures of the Arctic’ begins with two and a half minutes of sheer beauty, as lovely piano motifs are played against bass and drums in a classic progressive rock style.  By the time the whole arrangement kicks in, there’s enough space for ringing guitar lines and even acoustic rhythms to help flesh out the already huge sound even farther.  Never wanting to labour even the finest of musical ideas, things then shift towards more pointed math rock (led by some great lead work courtesy of Atkins) before moving firmly into alternative metal territory.  A mix of gruff and clean voices provide a good focus, but it’s Steve Wood with his enormous bass sound which proves to be the real star throughout.  ‘I’ll Need A Diagram’ presents IO at their fastest and heaviest – and, sadly, their least imaginative.  Those who like the more extreme elements of alternative metal will without doubt get some enjoyment from this number, but the preceding lengthier pieces prove these guys are capable of so much more.  Luckily, the number’s second half takes a more restrained approach: the angry vibes replaced with a waltz of punchy bass sounds, intermittent rhythm guitar and…brass.  It seems these guys have the imagination to constantly surprise [although any surprises will ultimately be void for those reading this before listening!]

The closing pair of tunes, ‘Horse for a Particular Course’ and ‘Voyage For The Alection’, combine various traits as heard through the earlier numbers, but even so, still bring moments of absolute magic.  Wood’s bass sound, in particular, is no less impressive by the end of the album, especially when combined with distorted Thurston Moore-esque/Mogwai influenced guitar drones as it is on the second half of the latter.  ‘Horse’ – a short instrumental – essentially provides a quick glimpse of each of the band member’s potential talents.  The off-kilter time signatures are handled with absolute ease by the rhythm section, while the clean and jazz-rock influenced guitar lines place the band more in line with other UK math-rockers Bear Makes Ninja and Wot Gorilla?, two bands who released material during 2012 that helped strengthen the burgeoning UK math-rock scene.

Whether tackling slow, pounding riffs or somehow tapping into sounds which could have been made by The Jesus Lizard, Between The Buried and Me or ISIS, IO are hugely entertaining.  The riffs instantly grab the attention while the overall sense of the unexpected – and the bands insistence on throwing in as many rock-based styles as possible – makes it almost impossible to stop listening until the last notes have silenced.  Challenging, ugly, cinematic, undeniably cool; the museum can be many things – but like most artistic curios, you’ll need to experience it for yourselves to make complete sense of its overwhelming scale and inevitable impact.