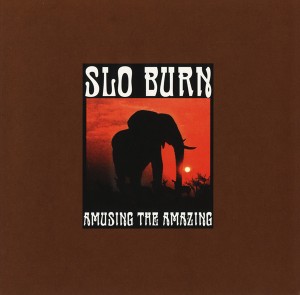 With guitars tuned to a low C and with fuzz pedals galore, Kyuss became kings of the stoner metal movement in the early 90s.  The band went their separate ways at the end of 1995, with guitarist Josh Homme forming Queens of the Stone Age, who would go on to critical acclaim with their mix of retro hard rock, post grunge and psychedelic  metal.  In 1996, vocalist John Garcia formed Slo Burn – a fuzzy low end rock quartet, who took the core sound Kyuss had made their trademark on their later albums.

‘Amusing The Amazing’, co-produced with Masters of Reality man Chris Goss, was released on Malicious Vinyl records in 1997. While Slo Burn’s sound doesn’t ever reach quite the extremes reached by Garcia’s former band, the core sound isn’t so different and their intentions are clear right from the beginning of the opening track.  Distorted guitars pave the way for ‘The Prizefighter’, which then get overlaid with a sledgehammer riff.  Garcia adopts the same vocal tone as before, just about holding its own against the grinding, sludgy bass and guitar work.  Although only a short track, weighing in at just over two and a quarter minutes, it does everything that’s required to prove that (perhaps more than Queens of the Stone Age would ever be) this band were more than worthy successors to the Kyuss throne.

‘Muezli’ and ‘July’ both follow similar traits and make for solid listening, even though there are moments during the latter where Garcia’s voice almost gets lost under the swamp of guitars and bass.  During ‘Muezli’ in particular, it would take a pretty hardcore Kyuss fan to spot that Garcia had a different band in tow.  Although not containing one of the most imaginative riffs, ‘July’ makes up for any shortcomings by including an added focus on the drums.  In places, Brady Houghton adopts a solid, tribal feel as opposed to his usual unsubtle, hard rock heavy-on-the cymbals approach (which had been clearly influenced by Brant Bjork’s style on the Kyuss debut).

‘Pilot The Dune’ is the EP’s absolute high point.  It’s not just a standout in the Slo Burn catalogue, but also a standout moment in the history of stoner rock, its mid paced beginnings typify what’s great about the sub genre, capturing a tight band and Garcia in good form.  Even better is the slow, grinding end section which holds the real power.  Over a brooding Kyuss style riff, Garcia tells the world: ‘when it rains I feel love, when it pours I feel hate’, in what could be one of his best ever performances.   In a complete change of atmosphere, this is broken up by a few bars of clean toned guitars which sound like they’re played through a Leslie Cabinet.

Breaking up mid tour in September of the same year, Slo Burn never recorded their planned full length LP, leaving us with only these four songs issued officially.  ‘Amusing The Amazing’ acts as a taster for something much bigger and better, but sadly it wasn’t to be.  For any self-respecting Kyuss fan, this EP is a must have.