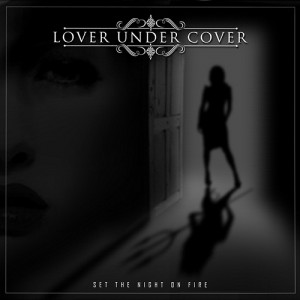 Lover Under Cover is a Swedish hard rock project formed around vocalist/multi-instrumentalist Mikael Carlsson.  This debut album – released on Escape Music – has a distinct Scandinavian slant, the songs sticking rigidly to the confines of some very European sounding hard rock.  To help bring his band to life, he has enlisted the help of a few faces that’ll be familiar to fans of the genre: Coldspell’s Perra Johnsson guests on drums, Last Autumn’s Dream’s Mikael Erlandsson handles keyboards and vocals, while Escape Music regular Martin Kronlund contributes various guitar parts and handles production duties.

In all honesty, this sounds exactly how you’d expect from something Swedish with Kronlund in the producer’s chair.  If run of the mill Scandinavian hard rock is your bag, Lover Under Cover may appeal, but be warned, you’ll have heard it all before…and almost countless times.  Perhaps more importantly, you’ll have heard this kind of thing performed far, far better by others. There are two big problems here: the first being the rather weak songwriting; the second, Erlandsson’s voice: while he’s sounded great in the past with Last Autumn’s Dream, he’s obviously having an off-day here. At his best he sounds like an unpolished Euro hard rock vocalist – certainly not of the calibre of Matti Alfonzetti, Goran Edman or Coldspell’s Niclas Swedentorp, for example.  At his worst, as is the case on ‘Angels Will Cry’, his raspy voice sounds like the work of a songwriter laying down a demo track for someone else to sing later.

The album’s best tune ‘Through The Storm’ is a reasonable mid-paced rocker with the kind of pompy chorus Gary Hughes (of Ten fame) would have turned into something epic sounding.  Erlandsson’s old fashioned organ lends a little more of a classic rock vibe, while the Celtic leanings of the twin guitars hint at sounds once heard from Gary Moore’s ‘Wild Frontier’ album.  Each element had the potential to make this a great track, but despite everyone – bar the lead vocal – turning in good performances, there’s still very much a sense that these musicians are capable of better.

The upbeat hard rock of ‘Flash In The Night’ features a reasonable bassline and piano accompaniment, but any initial promise is soon swept aside by a thin drum sound and a particularly uninspiring one-line chorus.  The aforementioned ‘Angels Will Cry’ – aside from being musically uninteresting – finds Erlandsson desperately trying to pull emotion from a very limited vocal range and sounding like a man with a slightly bad throat in the process.  A little better,  ‘Standing In Line’ kicks off with best foot forward with a twin lead guitar, before settling in for some safe, clichéd rock – again with a particularly half-arsed chorus and equally weak vocal performance.  The twin lead makes a welcome return, but Kronlund’s best efforts aren’t enough to salvage this tune…or indeed many of the others that make up this album’s eleven almost equally uninspiring numbers.

There’s very little else to be said about Lover Under Cover which doesn’t trot out variations on the various negative remarks already applied to the few songs covered in this review.  Even from a second division perspective, there’s almost nothing here to get excited about.