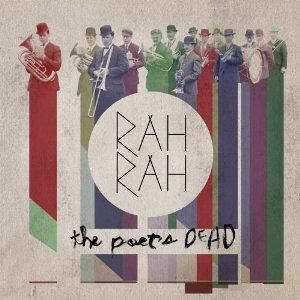 In the summer of 2012, Rah Rah’s Erin Passmore released ‘Downtown’, an excellent EP mixing quieter singer-songwriter moments with occasional bursts of rock.  The result was wholly charming, but only really a stop-gap until her band were ready to unleash their next album.

That record, ‘The Poet’s Dead’ (Rah Rah’s third full-length release) is a monster.  While there are a handful of tunes offering straight up indie rock (almost guaranteed to please those who still have a fondness for Pavement etc), its more distinctive tunes are the few cast from a much bigger range of influences and sounds – sometimes all thrown together.  Those busier tunes care not for subtlety.

One such number, ‘First Kiss’ features an incredibly loud drum and droning keys, which are both joined by almost equally loud guitar chords to create a particularly rousing piece of rock.  Although most of the tune sounds not entirely unlike something The Flaming Lips would have created during their ‘Satellite Heart’ period, it is not without its quieter more moments, where violin, some plucked strings and soft wordless female harmonies add a little more atmosphere.  A simple refrain of the song’s title passes as a hook, but like the aforementioned Lips – or perhaps fellow Canadians Arcade Fire – any chorus hooks take second place to multi-layered bombast.  Almost as full-on, ‘20s’ has verses combining slightly waily vocals (courtesy of keyboard player Kristina Hedland) and a noodling guitar, while the chorus – and ensuing instrumental parts – present a wall of guitars crashing their way through everything, backed with something which sounds very much like a mellotron.  Between these two elements, there’s not much room for much else, and yet, Rah Rah find space for a world of harmony vocals and a rattling bassline which really captures the general aggression within the loudest parts of the arrangement.

The title cut – one of the disc’s more instantly likeable numbers – bares a passing resemblance to The New Pornographers with its male/female dual vocals and breezy approach.  With a simple chorus, some electric piano, a bridge with handclaps and more besides, it’s generally sunny approach is quite welcome.  Given Marshall Burns’ liking of a slightly flat vocal, perhaps some will hear just as much of a latter-day Pavement influence, although it’s unlikely Stephen Malkmus would ever release anything quite this chirpy… Whatever you glean from it, it shows Rah Rah in an excellent light.

Pulling a huge influence from the 90s, the slow and brooding ‘Dead Man’ has a distorted, lead guitar part which would please J Mascis, while still finding room for the obviously melodic – in this case wordless female vocals singing in harmony (possibly Erin Passmore multi-tracked).  The juxtaposition of these two disparate styles lifts the tune above being merely a piece recycling old alt-rock ideas from two decades previously.  Keeping with a similar mood, ‘Fake Our Love’ works around an incredibly jangly base, where Rah Rah wind up sounding like a cross between The Decemberists, The Jicks and Wilco, with a little of their own natural flair helping to carry it off.

Fans who either loved Erin Passmore’s contributions to Rah Rah previously – or else came to Rah Rah via her solo outing – are treated to a couple of first-rate numbers in ‘Prairie Girl’ and ‘I’m a Killer’, where Passmore’s voice is placed right up front. Musically, ‘Prairie Girl’ has a simple base where loud-ish guitar chords provide a pleasing choppy rhythm and the drums follow suit, rarely breaking from a march.  While this may sound musically simple, maybe even a little harsh, Erin’s softer vocal provides a wonderful contrast, capturing all of that crying wonderment which made her EP special. ‘I’m a Killer’ is bleaker, preferring instead to build from an electronic base, which gives a rather unnatural feel in places.  Rather than borrowing from classic synth-pop, all electronic sounds featured within are very cold, almost with the mood of an 8-bit Nintendo soundtrack.  Luckily, a world of chiming indie-rock guitar lines are waiting in the wings, and what eventually blooms is another tuneful (albeit slightly mechanical) rocker which really suits Passmore’s vocal delivery.

While some of the vocals are a touch, uh, wayward, most of ‘The Poet’s Dead’s songs are strong enough to carry off any potential weaknesses. Some of these tunes are wonderful from the off, but due to the band’s occasional tendency for delivering their music in such an extravagant way, some take a while before the various elements really sink in.  However, once everything clicks, ‘The Poet’s Dead’ shows its full potential – the result is an album with barely a weak song in the bunch.