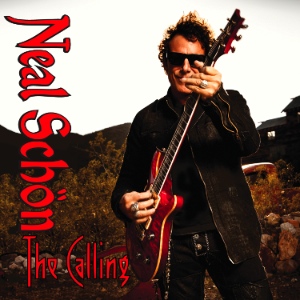 Although familiar to almost all as the ex-Santana guitarist and driving force behind melodic rock giants Journey, Neal Schon’s instrumental solo records are hugely overlooked in comparison.  Working within complex rock and jazz styles (often leaning farther towards jazz and jazz-fusion than rock), the instrumental approach on those releases has always allowed him to stretch his talents farther than on any recordings made with his regular band post-1978.

His seventh release ‘The Calling’ isn’t without its fusion inspired jams, but it comes with a stronger rock bias than some of his previous works.  One of the album’s rockiest tunes, ‘Back Smash’, finds Schon attacking with an incredibly hard riff, with suitably aggressive drum compliment from sometime Journey colleague Steve Smith.  The riff dominates almost throughout, but just at the point Schon feels it could start to sag, he changes tack and plays an acoustic solo with almost a gypsy guitar influence, just before his pal Jan Hammer wades in with a huge noodly keyboard solo.  Rock fans need not worry; despite a little bit of indulgence, it’s not long before the riff and melodic rock tendencies reassert themselves – the end result isn’t too far removed from something you may find lurking on a Derek Sherinian solo album. Slightly more accessible, the title track comes loaded with a groove-laden rhythm, while the lead work moves between long, soulful notes and quasi-aggressive soloing, both made more interesting by various multi-tracking techniques.  There’s a fine balance here between metallic riffs and almost bluesy leads, but whichever Schon chooses to play, the results are always wholly melodic.

Another of the album’s most jazz oriented pieces ‘Fifty Six (56)’ fools the listener into thinking it’s going to be very rock rooted via a slightly chuggy guitar riff and busy (almost circular) drum groove, but it’s not long before everything kicks off.  Schon throws in guitars with and Eastern flair while the keys sound like sitars; the drive behind the tune gathers pace quickly, and soon, everyone’s playing like they are trying to blow each other out of the studio.  It would be intense enough with its strong leaning towards jazz fusion as it is, but keyboard player Igor Len bashes out a piano solo that’s firmly in the improvised jazz category.  It kind of fits with the carefree abandon of parts of this tune, but it certainly won’t be to everyone’s tastes – especially not those approaching this album with the ears of a rock music fan.  In terms of fusion, though, bits of it sound fantastic.

‘The Calling’s two absolutely unmissable tunes are also two of its quietest.  The slow ‘Blue Rainbow Sky’ is simply lovely.  With a mid-pace, Smith’s drums joined by a blanket of organ, meaning Schon is given ample room to fill the space however he chooses, and wisely, after a slightly Hendrixy intro, he chooses to fill most of the three and a half minutes with long, soaring notes, its cinematic style leaning towards the epic.  In terms of brilliance, it’s up there with the intro to Gary Moore’s ‘Parisienne Walkways’, or any number of tunes of a similar elegance.  Soft and bluesy, with fantastic clean toned guitar work throughout, ‘Song of the Wind II’ has a very laid back and rather simple tune; this allows Schon scope to lay down a selection of atmospheric notes, while calming keys (leaning slightly towards the lounge) provide excellent accompaniment.  Schon’s playing is a world away from his Journey “day job” here, much closer in spirit to the more ambient side of Santana’s 70s jams (of which, this song’s title is partly in tribute).  Thankfully, on this gentle nod to his former employer, Neal chooses not to shift things into “samba mode” for a big finish…

A huge chunk of the album falls between these two extremes, with the guitarist sounding in fine form throughout, whichever mood or tempo takes his fancy. ‘Irish Field’ is a short piece, where in solo mode, Neal lays down a wistful, yet slightly clangy melody that’s evocative of solitude and expansive, rolling hills without ever being tempted to wander into any Celtic clichés, while ‘True Emotion’ captures a soft rock guitar performance set firmly in ballad mode…at least to begin with.  The overall tone of the latter brings to mind the best feelings of Gary Moore in slow blues mode (once again), with perhaps a touch of Jeff Beck creeping in, while it’s louder moments are unmistakeably the work of the Journey six-stringer.

The lengthy ‘Tumbleweeds’ is a heady mix of jazz-rock and funk, dished up with a slightly distorted guitar line. Reminiscent of some of Michael Landau’s recordings, the multi-tracking of clean-ish guitar rhythms, dirtier leads and occasional aggressive tendencies results in a busy arrangement that is perhaps this release’s most indulgent.  The eventual split between edgy guitar and another Hammer keyboard solo is very effective here and, surprisingly, the seven minutes seem to fly by – the tune busy enough to thrill the more muso-oriented, while staying (just about) accessible enough to entertain the more casual listener.  Schon’s guitar playing on this track is so full sounding and well arranged, it becomes easy to forget that ‘The Calling’ is an album recorded without the involvement of a bassist.

With most of its tunes impeccably crafted, if you are looking for a decent guitar instrumental record, then ‘The Calling’ should hit the spot. Its busy nature can mean it is possible to enjoy different aspects of the performances with each play, but that is potentially a good thing).  If you are happy enough to step a bit farther into the world of jazz fusion and are keen to find out more about his extra-curricular recordings, dig deeper and you’ll quickly find Schon has recorded material that’s potentially just as interesting than this.  If you’ve never heard it, seek out his 1997 double set ‘Electric World’; therein lies a whole world of great jazz based music often quite far removed from the Neal Schon most people know…