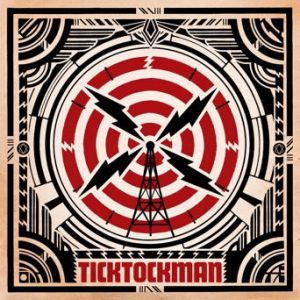 Seattle band Ticktockman self-released their debut EP ‘Periscope’ in February 2010.  This debut full-length – released a full two years later – was also issued without the backing of a label.  Like most releases, it has its obvious strengths. The first thing that’s striking is the fact that for a DIY project, the production – handled by Derek Moree – is superb.  The second thing that hits the listener is that, in Brock Lowry, this band possesses a terrific drummer.  Within a minute of the opening number ‘Archaic Republic’ he’s attacking his kit in a manner which recalls the mighty Dave Grohl in his youth.  Unfortunately, beyond these two aspects, there’s not much that’s particularly enduring about ‘Archaic Republic’ – the riffs are fine, though rather ordinary and the vocals are a tad lightweight.  Repeated listens help highlight the enjoyable qualities – as does cranking the volume knob – but overall, Ticktockman bring little that’s new to their chosen brand of alt-rock on this opening statement.

In fact, it’s not until track three, ‘The Architect’, where the band steps things up to a level that hints at something potentially special.  Lowry is given ample opportunity to lay down a few interesting drum parts and between the full-on rock moments, he can be heard playing some cool fills interspersed with some off-kilter stops.  Those drums are most effective when combined with Andy Lum’s lead guitar parts – full of overdrive in a Dave Navarro style, combined with what sounds like a touch of wah-wah pedal.  A few of the riffs recall bands like Oceansize, the LOUDquietLOUD technique is in full flow and the vocals are more atmospheric too, subjected to echo and other studio trickery.  With the full on drums balanced by some superb atmospheres and subtle guitar lines towards the end, maybe Ticktockman would have been wiser to use this as their opening number… It certainly showcases a band with a better – and more interesting – musical range.

Also excellent is ‘Jungle Cutter’, with its heartfelt vocal and solid rhythmic base.  Simpler than so much of Ticktockman’s material, and so much the better for it too: in addition to the great features already mentioned you’ll find a lovely bassline and noodling guitar solo to flesh things out even farther.  The first solo kind of ambles, but never in a way which feels like it’s merely playing for time.  It could be said there are slight resemblances to similar approaches employed by John Frusciante, though with fewer sharp edges.  The second solo (presumably played by the other of the band’s two guitarists) is more in keeping with the main riff itself; a touch of wah, a heavy dose of retro feel in the tone and served up with bags of attitude.  Brief and to the point, it’s a decent companion to the song’s main riff, which in terms of swaggering bravado is probably the album’s finest.

The rest of the album isn’t without its enjoyable moments – the riffs come thickly laid throughout, and as already said, Brock Lowry is an excellent drummer – but there’s nothing that’s really on a par with ‘Jungle Cutter’ or ‘The Architect’.  ‘The Mighty Veil’ has another meaty riff, ‘Expose of New Orleans’ possesses a tight rhythmic pattern worthy of Tom Morello jamming with UK metallers Mishkin (as well as a couple of unexpected Mexicana styled moments), or the atmospheric end of ‘Dirty Ole Sunset’ puts a mix of vibrato filled guitars and slightly distorted electric piano motifs to best use – every one of these statements helps paint a picture of Ticktockman’s sound – but none of this technical brilliance distracts from the fact that very little of the material is that memorable in the long term.

In accordance with their self-imposed mission statement of “bringing loud music back to Seattle”, Ticktockman can consider this album a success.  While, on a technical level, there’s really nothing wrong with this record – it’s well played and brilliantly produced, and individually none of the tracks could ever be dislikeable if you like alternative rock served with big riff – there are plenty of times when it could do with a few choruses to help cement the tunes inside your head after they’ve ended.  It’s entirely possible that lots of alt-rock fans will enjoy what’s offered by Ticktockman, but despite some great musical chops their material can feel oddly unsatisfying if you’re looking for something enjoyable in the long term.