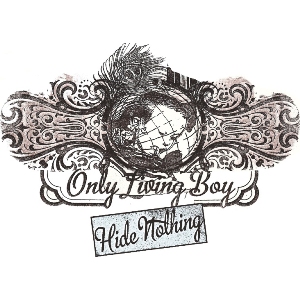 Named after the Simon and Garfunkel song, Only Living Boy have a sound which is incredibly retro.  Not retro in a New York singer songwriter sense, as their name would imply; on ‘Hide Nothing’ – the band’s second full-length release – their sound is a fusion of many great pieces of late 60s/early 70s vinyl, with a strong bias towards a blues-rock fusion, often delivered with a distorted edginess.

The lead track ‘Lonely Puppy Blues’ captures their core sound very well within its four minutes – with Joe Cirotti’s emotive wail upfront, accompanied by mix of clean jangly guitar work and a huge stomping riff cutting between the vocal sections.  Even with the fast paced rock-out which pulls the track to a close, there’s a more commercial edge at play than some of the other numbers.  The title song brings a few more traditional blues grooves to the fore, particularly with its lead guitar fills. While Cirotti’s lead vocal is still heavily processed, the soulful cry within also hints at something a little older, a little more classic sounding. Musically, it’s an incredibly solid affair, with Trevor Newcomb’s drums remaining steady throughout, with moments of dominant ride cymbal. ‘Sunny Day Man’ opts for something a little different again – its huge riff hinting at a stoner groove, while its verses offer up a funky looseness which would befit Josh Homme during his lighter moments.

While each of those three numbers focuses on a different element of Only Living Boy’s work, there’s an old fashioned fuzziness running through the songs, which gives them a certain kind of consistency:  this is the sound of a band meant to be listened to on vinyl.  This feeling is hammered home during ‘Demon Shuffle Part 2’ with its jarring, grinding riff and classic soloing, which occasionally lapses into a garage-esque looseness.  And it’s brave too – while the verses feature typically edgy distorted vocals and riffing, the chorus is a contrast, with almost Grateful Dead style harmonies lurking underneath the guitars.

‘Open You Up’ comes equipped with a driving riff which combines a Hendrixy/Cry of Love tone in places with solid staccato rhythms plus a dual vocal from Cirotti and bassist Eric Curley.  A mid section opts for gentle atmospherics; the vocals are hushed, the bass gently wanders and a clean guitar plays lines full of whammy bar.  After a couple of minutes of this, though, it starts to drag a tad (maybe it would work better in a live setting?).  The Hendrix inspired riff provides the strongest link here – in addition to the obvious spaciousness, a lack of real hook means the track really doesn’t sustain its five minute duration.  It’s not as if Only Living Boy are incapable of stretching things out to good effect, though, since ‘Priority One’ is almost the same length but makes for great listening throughout, thanks to a really solid groove underpinned by a swaggering bass line and drum patterns.  Likewise, ‘Burning’ is home to some great moments and mood changes: a standard blues opening gives way to a 70s hard rock riff intercut with blues vocal sections.  The band are on good form throughout this number – particularly Curley, who contributes some great lead bass work which, at times, is reminiscent of the blues-rock greats, his upfront style hinting at influences from Jack Bruce and John Paul Jones.  With his heavily treated vocal lurking somewhere beneath the hard grooves, Cirotti’s input almost feels redundant – it really is the music which counts here.

Just when you think you’ve got Only Living Boy figured, they throw a curve ball.  ‘Ronnie Ronzony’ is a fifty second burst of noise, heavily indebted to the 80’s US hardcore punk scene.  Although there are moments of slide guitar amongst the shouting – and after a couple of listens, it’s still clearly the work of Only Living Boy – the mood of this track is best likened to classic bands like Circle Jerks and 7Seconds and would have fit in well during their early live sets.  Initially, this track may have been unexpected as part of a garage-rock disc, but it really clears the cobwebs.

While ‘Hide Nothing’ has some great rock-out moments (especially ‘Burning’, ‘Sunny Day Man’ and ‘Demon Shuffle Part 2’), it’s on the more understated tunes Only Living Boy really come into their own as a band and stand out from the crowd. ‘Demon Shuffle Part 1’ is a number which is best described as a backporch affair, full of acoustic slide guitar, delivered with a hard twang. ‘Bag of Bullets’ shows a very mature sound with slow acoustic riffs; these are played in a very measured and sure fashion, underpinned by a solid drum line and occasional staccato work.

There is some great material on this album. Only Living Boy may not always have the directness and all-round punch of some other bands within their sub-genre, but that doesn’t seem to matter.  On this second album, they fuse garage rock and garage blues sounds with occasional jam-band aesthetics to achieve some very enjoyable results.