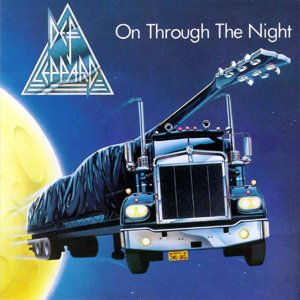 Def Leppard’s third and fourth albums – 1983’s ‘Pyromania’ and 1987’s ‘Hysteria’ – are two of the biggest selling rock albums of the 1980s.  The latter is one of the biggest selling rock albums of all time.  With these two albums, (over)produced by the legendary Mutt Lange, Def Leppard perfected their signature brand of soft metal with big hooks and even bigger harmonies.  Although a lot of this signature sound is down to Lange’s mastery of the studio, the band had a strong focus on melody and vocal harmony right from the beginning.

With regards to the band’s 1980 debut album ‘On Through The Night’, this is never more obvious than on ‘Hello America’, a track drenched in harmony vocals and tinkling synthesizers.  Those harmonies typify the vocal stylings which Def Leppard would soon make their calling card; and even at such an early stage, this blatant pandering to a music industry across the Atlantic could be seen as Def Leppard wanting to break out of the New Wave of British Heavy Metal as soon as possible.  Balancing a fairly throwaway lyric with a tough-edged arrangement, this presents one of the best examples of the early Leppard’s gift for melody and as such, made it the perfect choice for a single.  Between the commercial hooks and riffs, the guitar work exchanged between Steve Clark leads and Pete Willis’s solid rhythm brings an edge with a slightly more metallic leaning, but despite their best efforts, these guitar riffs still don’t quite match the work of their then heroes UFO and Thin Lizzy.

Although not quite as polished, ‘It Don’t Matter’ is also very melodic, with an opening riff which has plenty of groove.  That riff appears sporadically throughout, but during the verses, it gives way to very basic chord pattern, which is coupled by an equally simple bassline and a cowbell which, in places, could rival Blue Oyster Cult’s ‘Don’t Fear The Reaper’ for its lack of subtlety. It’s a track which – as part of a bigger picture here – certainly hits the spot; although it’s relatively basic approach probably could have been improved upon, had the more confident Def Leppard re-approached it for their second album sessions with Mutt the following year.  ‘Satellite’ is a statement of simple, no nonsense hard rock which showcases some great staccato guitar parts and a decent chorus.  What lifts above being ordinary is a rather grandiose mid-section, featuring a wah-wah drenched solo, some unexpected clean rhythm guitar and something nearing a bass solo.  It’s an interesting approach and hugely professional given Leppard’s relative youth at this time.

Even though there are lots of pointers towards some very promising talent, there’s no denying that ‘On Through The Night’ contains a couple of potential clunkers.  The worst offender is, in fact, the album’s opening statement, ‘Rock Brigade’.  Any song which contains the word rock in its title has the ability to make people cringe, but delivered from a bunch of teenagers whom fashion a chorus out of ‘Watch out it’s the rock brigade / oh no, it’s the rock brigade’, well, let’s just say it’s pretty questionable at best.  Luckily, Rick Allen’s rock solid drum part and the front line of Steve Clark and Pete Willis on guitars give those questionable lyrics a boost; the arrangement has enough cockiness that you just might manage to forgive the youthful song writing.  But only just.  Likewise, with ‘Answer To The Master’, the listener is expected to take the barrage of teenage arrogance with a bag of salt.  Again, any dodgy song writing is balanced out by a decent arrangement and tight playing: in this case, there’s a great twin-lead guitar part, a couple of energetic solos and Rick Savage’s punchy bassline, which definitely ranks as a high point here.  Rick Allen’s drum fills aren’t too shabby either.

‘Colonel’ Tom Allom’s production may not have the perfectionist qualities that Mutt would later bring to subsequent Leppard albums, but his approach is more than fine for the songs here.  As expected though, as a man best known for producing all of Judas Priest’s 80s albums, his techniques bring out the best elements on the harder numbers.  A rousing rock tune, ‘Rocks Off’ may not be the lyrical equivalent of Lennon/McCartney, but it captures the hard rock Def Leppard rather well, with a powerful riff which is reminiscent of ‘Stained Class’ era Judas Priest, while ‘It Could Be You’ and ‘Wasted’ (the latter also released as a single in a different recording) offer almost as much oomph.  Providing you can make it past ‘Wasted’s lyrics of teenage debauchery, it’s fine enough, albeit in a disposable sort of way.  Similarly, ‘It Could Be You’ breaks no new territory for the NWOBHM, but it has a naive charm.

‘Sorrow is a Woman’ is a bit of a mixed bag in terms of arrangement.  The verses are loaded with melody – the rhythm guitar work is beautifully clean, the lead guitar work occasionally hints at a jazzy infliction here and there and (as with ‘Answer To The Master’) the bass work provides the real highlight.  Throughout this number, Savage’s bass is presented very highly in the overall mix, and while he doesn’t play anything too complex, his work is more than just an anchoring role.  In fact, this track’s weak links come via it’s occasional hard rock moments; the chorus riffs sound like they’re building towards something big, but stop short.  In many ways, the rockier moments just interfere with the more intricate arrangements elsewhere.  With an atmospheric spoken word intro (courtesy of The Strawbs’ Dave Cousins), ‘When The Walls Came Tumblin’ Down’ has hints of pomp at its beginnings with Elliot vocalising over a soft guitar line.  While this hints at something bigger than straight-up hard rock, it doesn’t last.  The electric guitar riffs chug along in a manner that’s not too subtle – and as such place Def Leppard alongside many of their NWOBHM contemporaries.  What sets the band apart here, though, is their use of harmony vocals and a huge pomposity as the track progresses; those lead vocals are tempered by some well-placed harmonies and then overlaid by Clark’s vibrato lead work.  It’s one of ‘On Through The Night’s more adventurous numbers, but even so, it doesn’t live up to the epic ‘Overture’, which closes the album.

A track which appeared in a slightly different form on the Def Leppard demo tape and on their self-financed 7” EP, ‘Overture’ gets a full polish up and re-recording here.  As the opening notes drift in, there’s something here that’s a bit different – more mature, certainly far more adventurous.  The clean toned guitar work has a beautiful quality and Savage’s bass and Elliott’s vocal help take it to a higher level.  Keen listeners will recognise a similarity in the guitar part to moments featured during the UFO number ‘Cherry’ (from their 1978 album ‘Obsession’), but that’s as far as any similarity goes.  Once the drums crash in, Willis and Clark tear into a Thin Lizzy inspired twin lead, before the band powers into the rest of an already epic number.  Elliott can be heard in a strong, natural vocal role, backed by a few great harmonies in places, while Savage’s bass line gallops across everything with a far amount of abandon.  Also finding places for a couple of the album’s best guitar solos and a second twin lead which sounds like a cheeky nod to Iron Maiden (then, very much peers to the fledgling Leps), the seven and a half minutes of ‘Overture’ represent ‘On Through The Night’s finest achievement.  The band really still ought to hold this up as something of which they can be proud:  the first two minutes, in particular, may even be the best thing Def Leppard committed to record during their first three years.

Some of the song writing may be clichéd and the general rock posturing a little green in the gills, but the seeds of the Def Leppard sound can be heard scattered across various moments of ‘On Through The Night’.

In terms of live performance, the songs featured here were all but left on the shelf after the ‘Pyromania’ tour of 1983/4, with only ‘Wasted’ and – rather surprisingly – ‘Rock Brigade’ making sporadic appearances once again after 1999.  It mightn’t always have the polish of their arguably more popular works, but why Def Leppard have all but disowned ‘On Through The Night’ is a mystery.  As far as debut albums go, it’s got its share of great moments.

While it could certainly be argued that their second album (1981’s ‘High & Dry’, the first of three albums with Mutt Lange in the producer’s chair) is far more structured in terms of performance and the band really make the best of their new-found tougher, leaner sound, the carefree, youthful experimentation the band enjoyed on their debut shouldn’t be overlooked as often as it has been. And while – as a whole – ‘On Through The Night’ may not be as enduring across the ages as Iron Maiden’s debut or Judas Priest’s ‘British Steel’ (also both released in the same year), it’s strongest moments are among the best to emerge from the New Wave of British Heavy Metal.

1 thought on “DEF LEPPARD – On Through The Night”