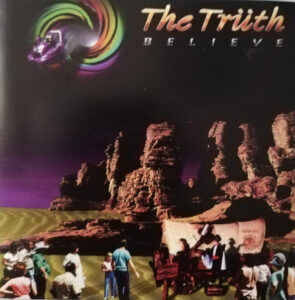 This 5 track EP from Florida based band The Truth was self-produced and sounds like it was put together on a budget of $3.75. The production is extremely flat; the guitars are way too loud and the drums sound hollow and lifeless. Maybe bringing in an outside producer might’ve helped, guys…

Add to this a screaming, gobshite vocalist who’s about as tuneful as fingernails on a blackboard and you’ve got The Truth. As a band, they definitely aren’t shy in showing their influences – they are desperate to be Queensrÿche and so far, they’ve made a worse job of it than Fates Warning and let’s face it, Fates Warning were always a bit shite. They say imitation is the best form of flattery, but if I were Queensrÿche, I’d go to Florida and give this lot a good kicking.

Those of you who feel I’m being a little unfair as ‘the band have put this together themselves’ should keep schtum and check out the self-financed CD ‘Dogs’ by Bone Machine and see how well melodic rock can be done without the aid of a label and only a small budget.

Avoid The Truth at all costs. By thinking they could have a career with this old toss, they’re living a lie.

6 thoughts on “THE TRUTH – Believe”