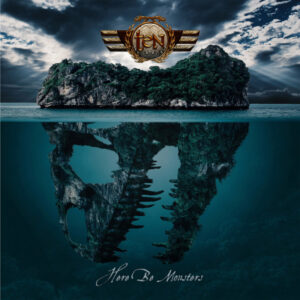 After a very prolific run – eight studio releases in a little over a decade – Ten took a five year break. They’d certainly earnt that, but fans were delighted when Hughes and company returned in 2011 with ‘Stormwarning’, an album that captured the enormity of Ten’s past without feeling like a direct retread, and swiftly followed that with the equally enjoyable ‘Heresy & Creed’ just a year later. It always seemed amazing, considering the size and complexity of some of their work, that Ten seemed able to crank out albums at a rate not seen since Saxon rattled off classic after classic in the 80s, but here they were, and another four albums released over the next six years more than cemented their place as one of Britain’s best melodic/hard rock bands.

Ten’s fifteenth studio album, ‘Here Be Monsters’ – released in February 2022, less than a year after Hughes delivered his solo album ‘Waterside’ – finds the hard working vocalist and current right hand man, guitarist Dann Rosingana, in something of a comfort zone. Its dozen songs rarely break from the template set by earlier releases, but as you would expect, that in itself brings plenty of entertainment. At least five of its tracks stand out as being among the band’s very best since 2011, and that will be enough for many to approach the album with a keen interest.

‘Fearless’ wastes no time in dropping the listener into Ten’s grandiose world via a lengthy piano intro, but it’s with the arrival of a great guitar riff that the melody really takes hold. Rosingana opens with a descending riff that’s fairly big, but after settling into a semi-funky groove, he steers the band through a world of very retro moods that echo bits of Deep Purple’s ‘Stormbringer’ and Doug Aldrich’s Burning Rain. The combination of a great, fat guitar tone and some solid drumming (courtesy of Markus Kullman) gives this Ten line up plenty of muscle, but it isn’t too long until – as always – Hughes becomes the dominant player, and he’s in very good voice as he chews his way through a weighty tale of “a man from the east” and a love “shared by design” within something that sounds like the hard rock equivalent of a 1940’s adventure movie. Factoring in a huge guitar solo or three where Rosingana and second guitarist Steve Grocott trade off some massive fretboard melting leads before pulling together with a taut harmony, almost everything about this opening number is cut from the “classic Ten” cloth.

From more of an AOR perspective, the heart of ‘Chapter & Psalm’ scores highly in terms of melody, with Hughes adopting a vocal that confidently rises and falls against very strong riffs which, at first mark a return for a very theatrical piano, but quickly usher in some great guitar work where Dann sounds as if he’s channelling a more AOR-centric version of Ozzy’s classic ‘Crazy Train’. As that riff gains traction, Ten fill the next five minutes with some top tier melodic rock, with Hughes conveying the same kind of richness that David Coverdale possessed in 1980, whilst bassist Steve McKenna anchors a great rhythm throughout. The presence of some massive harmonies filling a very appealing chorus seals the deal in record time, and lyrically, Hughes sells a tale of “guardians of time” and “compasses” with such a impassioned delivery and belief, you can’t help but be swept along with the band’s enthusiasm. By the time another finely tuned guitar solo rises, this becomes one of the album’s genuine highlights.

You might suspect this album is front loaded, given such a strong pairing is used to kick everything off, but the rest of ‘Here Be Monsters’ holds up almost as well. Mixing some very 80s AOR chops with a few pompy moments not too far removed from bits of Magnum’s 2022 release ‘The Monster Roars’ ‘The Miracle of Life’ gives keys man Darrel Treece-Birch a bit more to work with, as he throws out bright sounding refrains beneath a wall of guitars, whilst Dann sounds as if he’s in his element working through the very commercial sounding riff. For anyone who may (wrongly) feel that this is a little lightweight, some consolation will certainly come from a couple of the album’s smartest guitar solos, with Rosingana launching into a flurry of busy notes for the first, and Grocott dropping in something dirtier for the second. Despite often sounding like huge melodic rock by numbers, there’s still plenty here that sounds like top drawer Ten, and it’s great to hear the band using the guitarists’ two very different approaches to their advantage. ‘Anything You Want’, meanwhile, coasts along on some easy AOR clichés, but everything still sounds appealing thanks to some finely tuned harmonies and a buoyant melody. There are a few moments where Gary’s bigger delivery sounds at odds with the pop-ish melody, but Ten’s professionalism carries everything well enough to make it all work, even if it ultimately ends up sounding a little forced. That said, they must have been onto something here, despite a few melodic wobbles: in terms of all round memorability, this is the album’s trump card. That pop-tinged chorus might not be a perfect fit for Hughes, but it’ll be the track you’re most likely to end up singing at some point whilst doing household chores…

In a slightly heavier mood, ‘Strangers On A Distant Shore’ yields a solid riff, with Dann wielding a massive chug, counterbalanced – as always – by Hughes presenting a more soulful vocal. Within six minutes, the track serves up more than enough Ten staples within its huge sound, and their brand of classic hard rock straddles a gulf between the 70s pioneers and twenty first century revivalists with ease, despite the production being a little grubby in places. It may not be as melodic as most of ‘Here Be Monsters’, but for those looking for something in a classic rock vein, and home to some strong, sweeping lead guitar parts, it might become a favourite in time. For those who love Ten when they lean even farther towards the epic, the seven minute ‘Follow Me Into The Fire’ will not disappoint. From the get-go, Hughes and Rosingana lead the charge with a huge vocal and clean guitar, before descending into a world of 80s influenced melodic metal where traces of ‘Dream Evil’ era Dio inform the main riff. The number’s heavier moments are brilliantly offset by a near perfect AOR vocal, quickly setting in motion something very much in the “classic Ten” mould, but the real highlights are supplied by Grocott, adding some particularly busy lead guitar during the second half. Looking at the whole package, it has a confidence and heart that calls back as far as the debut, and in being unafraid to go for broke in terms of sheer ballsiness, it definitely gives this album another stand out cut.

A little more complex, ‘The Dream That Fell To Earth’ features a jagged guitar riff that cuts through Ten’s sweeping grandiosity in a few places, occasionally hinting at a slight prog metal influence, but those not keen on the likes of Threshold and Dream Theater needn’t worry, as it’s more of a flourish than a genuine musical twist. In the main, this presents the band in a very familiar form with a sizeable slab of melodic rock that takes shape very easily with Hughes’s voice soaring above pompy keys, and a rhythm section turning in some very solid work. In terms of a chorus, this track is an instant winner, as it utilises a multi-layered vocal brilliantly and Hughes recycles the kind of melody that sat that the heart of many a past classic, before Rosingana and long serving six stringer John Halliwell steal the show with a barrage of twin leads worthy of Iron Maiden circa 1985. In terms of hard edged melodic rock/classic melodic metal, these five minutes are especially on point – sounding like Ten from years gone by, but still sounding as if they’re genuinely inspired by their art.

The closing number, ‘The Longest Time’, presents an archetypal Ten ballad, and although it showcases a band on autopilot in many ways, it still holds its own as the kind of melodic rock tune that long time fans will enjoy. A strident piano melody wastes no time in setting up an almost stage-like arrangement, with a melody carried by one of Gary’s signature vocals. You’ll have heard similar from Hughes regularly since 1992, but there’s no sign of his command of an AOR ballad weakening. Also in terms of making this a little more interesting, there’s a lead guitar break that almost carries a Mark Knopfler-esque, almost folky tinge, a few taut harmonies and a lilting melody that’s got a really old fashioned appeal. In short, its focus on melody and familiar feel makes it a great curtain call, even if ‘Here Be Monsters’ offers a few far superior songs along the way.

If there’s any small criticism to be made, it would be that ‘Here Be Monsters’ lacks a no nonsense thundering rocker – a la ‘Battlelines’ or ‘Fear The Force’ – but it’s fair to say that if you’ve ever considered yourself a Ten fan, then this album will push so many of the right buttons, and will do so right from the very first listen. Its core doesn’t often deviate too much from things you’ve heard before, but a few great flourishes – such as the quasi-funkiness at the heart of ‘Fearless’ and the perfect twin lead work within ‘The Dream That Fell To Earth’ – help in giving the material a lift. In addition, Hughes is superb voice – far better than on ‘Waterside’ – and the combination of huge melodies and shameless pomp really bring out the best in the veteran singer throughout. Few melodic rock bands sound quite so enthusiastic some fifteen albums and twenty six years down the track, but Ten honestly sound better here than they have in a long while. None of this will win over the long unconvinced, but in so many ways, ‘Here Be Monsters’ represents a great band firing on all cylinders. Whether you’re a fan of old, or approaching this with fresh ears, this is a highly recommended disc.