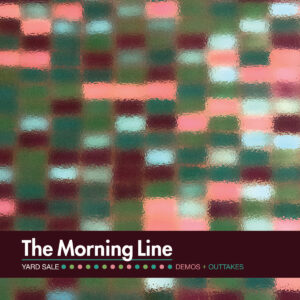 Something of a stop-gap release, ‘Yard Sale’ brings together a couple of other digital singles, alternate takes and leftovers in one place. It really misses a trick by not including the brilliant ‘Back On Earth’ as part of a larger package, but within the material present, you’ll find a few good reasons why The Morning Line continue to be one of San Francisco’s best underground bands.

The lead track ‘Straight Lines’ dates back as far as 2004, and with a full compliment of ringing guitars and a straight up US indie-rock sound peppered by Americana tinged riffs, it sounds like an instant classic in the Soul Asylum mould. The way a natural vocal jostles against a full bodied riff and the band really taps into a blend of power pop melodies very much looks forward to ‘North’ some fifteen years later. For those who’ve never heard The Morning Line previously, it would actually make a decent entry point thanks to a strong hook. In addition, rhe driving guitar riff supplied by long-time member David Knupp comes with such an overwhelming pang of nostalgia for the era in which it was recorded, so it’ll almost certainly reel in a wealth of listeners who spent half the 90s in thrall to Dave Pirner, Jeff Tweedy and the unfairly maligned Gin Blossoms. ‘I Can’t Say’ (an outtake from ‘North’) brings more of the same, despite being recorded some years later, and its uptempo groove really brings out the best in an overdriven guitar riff as well as highlighting the band’s constant desire to immerse themselves in a world not far removed from Soul Asylum’s ‘Hang Time’ LP. In terms of retro rockers, it doesn’t ever break the mould; it simply wants to entertain listeners with a familiar jangle which, in this case, comes with quite some heft and is complimented brilliantly by a slightly lax vocal that lends something more of a roots rock vibe.

A remix of ‘Los Angeles’ (a track originally from 2017’s ‘Smoke’) provides a small improvement upon the earlier recording by cleaning up things a tad. The guitar sound loses a little of its edge, but in doing so, it allows a brilliant Teenage Fanclub-esque melody more room to shine, while a vocal – falling somewhere between Dave Pirner and Edward O’Connell (another vastly overlooked talent recycling rootsy rock charms) – more than carries a hooky melody to glory. The changes here may be somewhat subtle, but a once good track now has the potential to become a great one in time. For first time listeners, these three minutes capture The Morning Line’s core sound at its most commercial and familiar. A further remix is applied to ‘Santa’s Song’, a festive novelty that originally appeared on an old Kool Kat Records compilation, but unlike ‘Los Angeles’, it’s not immediately obvious why it needed any kind of overhaul. Taking the song at face value, it’s one of those yuletide numbers that could actually be enjoyed throughout the year since the music has a summery feel and the main hook “Christmas time is wasted on you” (presumably the mantra of a sarcastic Santa) provides an unexpected earworm. If its inclusion on this digital freebie brings this track to a few new ears, it’s all for the good. A further novelty comes from ‘I Love Your Blog’, a semi punky workout celebrating online culture that lyrically became dated about three weeks later (“I posted on your MySpace / In the hope that you will hear…”). On first listen, it’s quite pleasing to hear the band rocking out in a different way, but it’s one of those songs that wears a little thin soon after. The riffs are kind of cool in a Franz Ferdinand way (also very much in keeping with the era of the recording), but an overly loud, Costello inflected vocal sits a little awkwardly at times, making it more obvious why this hadn’t been shared previously. It’s very much a case of a tune that’s nice to be given, but is unlikely to every be anyone’s favourite.

Rounding out this collection of curios, the acoustic demo ‘Child’s Play’ was the first song The Morning Line set down during the 2020 Covid pandemic and, as such, is something of an interesting time capsule regardless of the song itself. The recording is thin and echoey – though a good step up from Robert Pollard’s boombox experiments – but via some strident strums and the vaguest of ‘When I Was Cruel’ era Costello-like melodies, it’s easy to hear the genesis of something that could become great with the addition of a full band. Maybe it won’t get that far; the hook seems fragile, so maybe its always destined to be let into the wild as an acoustic skeleton set free from ever growing pile of song writing ideas. Whatever, it’s nice to hear The Morning Line’s melodic side stripped down to its basic nuts and bolts. It proves they really don’t need huge production values and other distractions to make their best material work. At the heart of it all, there’s often a great song, and this is no exception.

Whether this ‘Yard Sale’ represents a table of musty scraps or is a grab bag filled with mystery treats will be down to the individual listener, but there’s a fair chance that most casting an ear upon this digital collection will come away having heard at least two tunes that add something decent to The Morning Line’s legacy. The two novelty numbers are likely to be more of a frivolous curio by most people’s standards, but the remixed ‘Los Angeles’, ‘I Can’t Say’ and ‘Straight Lines’ make it more than worth a download. Offered on a “pay what you want” basis, it’s technically available for free, but if you can throw a dollar or two into the band’s kitty, they’d likely appreciate it.

Read a review of ‘North’ here.