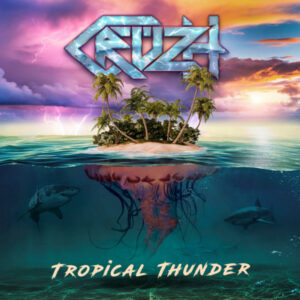 By the time Cruzh re-appeared with this second album release, it’d been five years since the debut briefly appeared on record shop shelves. A legacy band, such as Night Ranger or Journey can afford to be away for that long, but a band with only one lukewarm album to their name? During that time, there had been literally hundreds of other better melodic rock releases, and it’s only the fact that a huge amount of AOR fans are incapable of moving on that guarantees ‘Tropical Thunder’ would shift a few units.

The band weren’t exactly big news first time out, and a prolonged hiatus, coupled with a change in line-up – marking the arrival of new vocalist Alex Waghorn – sort of means they’re approaching their career afresh, but this second bite of the cherry is a huge improvement all round. Yes, there are a few vocal filters still present, but Alex has a much better voice than his predecessor so a slightly more natural approach makes sense. The production is also more sympathetic to the task in hand, which allows Cruzh to crunch whenever appropriate. These changes are displayed rather splendidly on the title cut which, indeed, thunders like an old hard rock/glam hybrid from 1991. The main riff announces Cruzh’s arrival with something that wouldn’t have sounded out of place on the Heaven’s Edge debut and a couple of speed oriented lead guitar moments call back to Pole Position, creating a musical blend that constantly shifts between hard rock crunch and huge melodies. With a decent chorus in hand, despite everything feeling a little old fashioned, the album gets off to a great start. ‘We Go Together’ quickly switches the mood to something far more poppy, but actually gives the album an early highlight with its shameless fromage based antics. A stomping rhythm conjures up imagery of a wannabe arena rock band with its heavy beats, while a pop/rock chorus shows of the band’s Scandinavian heritage with a barrage of melodies that aren’t a million miles from a harder edged Roxette. With an anthemic hook bolstered by harmonies kind of hinting at a Eurovision entry from 2009, it waves its party spirit with pride and the presence of a decent lead guitar break really helps to bring everything back in line with the Cruzh of yesteryear. It may not be original and it’s certainly cheesy, but it’s also insanely catchy. Those who came looking for some very 80s influences will absolutely love ‘Turn Back Time’, a tune that blends choppy guitar riffs and blanket keys in a way that seems as if Cruzh have overdosed on the Harem Scarem debut. It’s instantly impressive, but a big key change into a harmonious pre-chorus and – eventually – the kind of hook the early Danger Danger would’ve driven to glory makes this the greatest track the band have set down to date. A couple of much dirtier, almost grungier, riffs appearing out of nowhere along the way seem briefly out of place, but it doesn’t spoil the mood in any way; it merely suggests that this “new” Cruzh are keen to mix things up a little and drop some hefty sounds into their world of massive melodic rock.

In terms of album openings, Cruzh couldn’t have hoped for anything better, but the rest of the album doesn’t exactly skimp on the overall quality. ‘New York Nights’ opts for a solid, mid tempo workout that wouldn’t sound out of place on Bon Jovi’s ‘7800 Fahrenheit’ or one of Palace’s enjoyably retro albums with its big drums and parping keys. Despite a couple of lyrical howlers (“the night is young and so are you” might just be the most misjudged rock lyric in two decades), there’s some top grade melodic rock being played out here, with a chorus straight out of AOR/glam metal’s heyday and a twin lead break creating an effective climax. In a similar mood, ‘All You Need’ fuses a world of 80s AOR with a smidgeon of White Lion’s big haired rock charm, with guitarist Anton Joensson dropping in a few busy lead flourishes that hark back to the best work from the long AWOL Vito Bratta, whilst the punchier ‘Moonshine Bayou’ mixes swaggering riffs and horsey guitar squeals with a trashy hook. The stop-start approach used on the verses doesn’t always show off Joensson at his finest, but he makes up for that with a few tasty fills and some dark soaring notes that counter an unexpected reggae influenced middle eight. In aiming for that party spirit, this doesn’t quite hit the mark, but in giving this album yet another important change in mood, it does a fine job. Shifting back into pure AOR, the intro to ‘Paralyzed’ shamelessly lifts from Bon Jovi’s ‘She Don’t Know Me’, but it’s something of a red herring since, soon enough, Cruzh grab a hold of a choppy riff that’s more suited to their Swedish style. The ensuing four minutes bring even more enjoyment via a couple of smart lead guitar flourishes and a tried and tested approach to a weighty hook.

The album’s only ballad, ‘Cady’, exposes a couple too many vocal filters, but the band’s gift for a strong 80s melody often shines through. Pianist Erik Wiss clearly understands the idea of less being more as he underscores the vocal with some very hard struck chords. His playing is never flashy and he’s always mindful of a simple melodic core, sounding very much like a man who has studied those classic Survivor ballads. It’s all rather nice, but errs on the ordinary before Joensson creates a wonderful climax with multi-layered guitar lines that sound a little more like Brian May than Neal Schon. Sure, it’s predictable, but the performance is solid and, yes, Cruzh are at their best when the guitars are more in evidence, but without this track, the album would certainly feel as if there were an important component missing. In closing, the acoustic ‘N.R.J.C.’ is potentially filler material, sounding like an MTV generation throwback with jangling rhythms, bongos and harmonies coming together in a very calculated way. That less than natural feel isn’t really helped by the band name being shoe-horned into the chorus either. Despite plenty that could inspire a casual indifference, it actually redeems itself towards the end when bassist Dennis Borg gets a moment in the spotlight, filling a couple of bars with some tight bottom end wrangling. It’s never going to be Cruzh’s greatest achievement, but it doesn’t damage the overall quality of an otherwise great album.

‘Tropical Thunder’ is a thousand times better than Cruzh’s debut record. To say that it exceeds expectations would certainly be an understatement. However, it’s place in an era where millions of rock fans can access millions of albums at the push of a button means that it could still get lost within the huge volume of new music that’s constantly bombarding the world. There’s no real guarantee that this will ever find an audience outside the regular customers at the Frontiers Records storefront and the dwindling number of AOR diehards, and that’s a shame. If only a time machine could take them back to 1989, this would be huge: up there with the Danger Danger debut, the self-titled Stage Dolls and the US mix of the first Alien disc. Highly recommended.