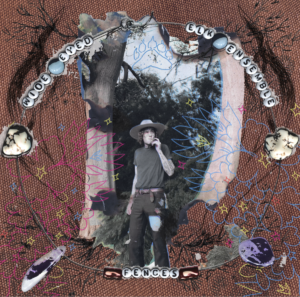 Back in 2015, Fences made music that sat very comfortably within the indie-rock spectrum. The sound on that year’s ‘Lesser Oceans’ tapped into a sound that often sounded like a more synth based Mercury Rev crossed with the quieter and poppier moments from The New Pornographers. By the time 2019’s acclaimed ‘Failure Sculptures’ rolled around, band leader and frontman Christopher Mansfield seemed to be besotted by various elements of Americana. In adding extra folk and Americana derived elements to the already strong alt-pop sound, Fences created something rather special and a strange bubble where Fleet Foxes and Beck seemed to co-exist helped to create the band’s defining work.

Two years on, the ‘Wide Eyed Elk Ensemble’ EP goes even deeper into a world of experimental Americana. As its title suggests, often evokes a feeling that Mansfield and friends created the core of the material in a log cabin, or at least somewhere far away from their native Seattle. At the heart of the songs, you’ll still find bits of the indie and pop that was integral to earlier works, but this seems a little braver – almost unafraid to forge a new path, whether anyone wishes to follow or not. In the mournful ‘My Pale King’, especially, there’s an emptiness and sadness that more than suits this partially detached mood, with Benjamin Greenspan offering a sad melody via the electric piano. This gives the backbone of a great introspective number a very “90s via the 70s” quality that’s impossible not to love. Complimenting the great but unfussy music, Christopher’s vocal almost has an alarming disquiet as he sings of “awful things that angels sing” and how he “should’ve tried harder”, while unexpected interludes of the noise of children playing is juxtaposed against the sadness. There’s plenty here that’s familiar, and yet the stripped back feel constantly draws in the listener as if every moment is brand new. It’s all so sad, but so beautiful.

The EP’s other highlight ‘The Folk & The Lore’ presents another perfect snapshot of where Fences musical interests lie in 2021, when spacious programmed beats suggest retro yet modern trip-hop vibes, while the main melody calls back to far more of bygone age. The use of vocal filters and harmonies carries a hint of Fleet Foxes, while the acoustic instruments – again, in stark contrast with the beats – seems even more indebted to the past, almost Appalacian, yet holding a folky familiarity much closer to home. The fact that the lead vocal often appears to teeter on the edge of a melody resembling Neil Young’s ‘Helpless’ is a reminder that everything old can be new again, and all things considered, the familiar folk and pop tones bristling against light electronica creates a pure magic that, at the time of release, seems to be uniquely Fences.

The remaining tracks might not be as strong, but that has more to do with the best songs being so perfect as opposed to any obvious weakness. Going even deeper into a spacious world of alt-folk, ‘Boot Height’ pulls discordant banjo sounds into a landscape of beats and clanking sounds, before choirs of Fleet Foxes styled harmonies intercut a buoyant rhythm with an unsettling air. Musically, it’s a little more disjointed, but a strong lead holds the pieces together, creating a number that bigger Fences fans will find fascinating. You’ll barely have time to get used to it all, though, before the protagonist darkens the inhabited bubble, first asking “will you grow old with me” – further suggesting an intimate world of safety – before sharply turning the lyric into a scenario involving an early death. Suddenly, those echoing harmonies take on a whole new vibe… It’s a tune to approach cautiously, but eventually, in giving this EP something even darker, it helps to build upon an incredibly varied fifteen minutes.

‘Shape Shifter’ mixes brilliant finger picked acoustic guitar lines that carry faint echoes of early Shawn Colvin performances which are swiftly smothered by pop-ish beats and an indie cool that could easily have been inspired by old Bright Eyes/Conor Oberst records. As with the best moments of ‘Failure Sculptures’, something that should feel forced or manufactured actually feels like a natural progression for pop/alt-folk. If the music doesn’t quite grab you, somewhere around the second listen, the deeply personal lyric certainly will. Fleshing out the release, the poppier ‘Fake Snow’ feels a little out of place being an old ‘Lesser Oceans’ era leftover, but it stands the biggest chance of pulling in new listeners with a bright piano sound, a dual male/female vocal and a stronger alt-pop melody. It may not be the perfect companion to, say, ‘The Folk & The Lore’, but if it helps curious ears backtrack to earlier Fences sounds, then it more than serves a purpose.

At least three of these tracks venture deeper into a strange world of Americana, where a forlorn Beck shares his talent with a spaced out Broken Social Scene. Everything about its strongest moments suggest a band willing to experiment and the best bits will certainly make you wish this had been more than just an EP. On it’s own merits, though, it’s the kind of release that the fans will love…and will make the merely curious even more so.