On November 21st, London’s Shepherd’s Bush Empire played host to arguably one of the best and most energetic gigs of 2014 when various forty-somethings said goodbye to their youths and goodbye to Carter USM at the first of their two farewell shows.  Barely a week and a half later, the atmosphere in the venue couldn’t be any further removed from that particular gig, when – on a particularly cold Tuesday night – a sparser crowd gather to see Canadian music collective The New Pornographers promoting their sixth release ‘Brill Bruisers’ with support from the relatively unknown Mini Mansions. 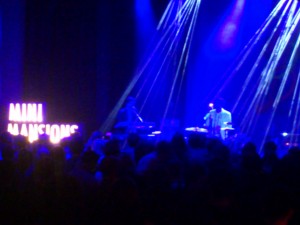 Although the venue isn’t very busy when Mini Mansions take the stage, it’s quickly clear that this gig represents one of those rare occasions when the chosen support band is right.  Although relatively few people witness the set by this US alt/indie band, those paying attention clearly enjoy the performance given the three guys on stage.  Accompanied by a simple yet effective light show and a light box baring the band’s name, Mini Mansions deliver a solid half-hour’s entertainment.  Their guitar-free tunes often have the air of a new wave band, occasionally seem reminiscent of the more atmospheric work of Mercury Rev and the music never lacks gravitas, thanks to a distorted bass making almost a full orchestra of sounds.  Drummer/vocalist Michael Schuman [also bassist with Queens of the Stone Age this week] provides an interesting focal point, playing a minimal set up in a standing position, reminding somewhat of Jellyfish man Andy Steurmer.  Sadly, there’s no ‘Ghost at Number One’, but set high points include a new number ‘Creeps’ – full of synthy goodness – and a particularly minimalist cover of the Blondie classic ‘Heart of Glass’.  Definitely a band worth keeping a look out for.

At a timely 9pm, the house lights dim for the second time and seven figures unceremoniously wander on to the stage.  The polite cheer that greets them almost sets the tone for the rest of the evening.  Without a word, the band breaks into the lead track from their sixth (and at this point, most recent) album, ‘Brill Bruisers’.  The synthy edge that informs the track has a poppier tone than some of the band’s past works, but the heavy keyboards have a strong sound and, more importantly, a clear sound, something unusual for the venue in question.  As guitarist/vocalist A.C. Newman and keyboard player/vocalist Kathryn Calder start to sing, their collective “doo doo doo”s are barely audible. A couple of lines in, Newman signals for his microphone to be turned up (or perhaps even on) and from then on, things are technically fine from an audio standpoint. The upbeat style of the track should have the crowd bouncing, but aside from a solitary figure in the centre, everyone appears practically unresponsive.  Maybe it’s because The New Pornographers’ brand of power pop is quite cerebral compared to some of their peers’, but maybe it’s just the Tuesday night malaise.  Odder than the crowd indifference, guitarist/vocalist Dan Bejar (sometime of alt-rock band Destroyer) performs with his back to the audience throughout this opener…only turning to face the crowd once he’s called upon to sing the classic ‘Myriad Harbour’ that soon follows.  By this point, the sound is even clearer, with all harmonies cutting through the sound and Calder’s woodblock percussion sounding sharp.  Bejar, meanwhile, still insists on turning away anytime any instrumental breaks occur…it is a trait that is, perhaps, a little off-putting. 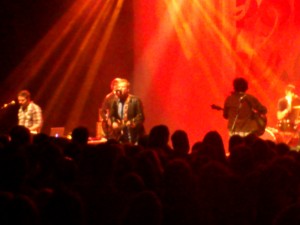 At the end of this number, Bejar leaves the stage, only reappearing whenever his lead vocal tracks appear in the set.  Expecting Newman to greet the audience, the attendant crowd instead witnesses his walking towards the back of the stage to speak with the drummer, their words inaudible.  This is fairly common practice throughout the evening; most between song banter is shared between band members – away from mics – and rarely involves or engages the crowd.  The feeling is odd; it’s almost like intruding on the band’s private rehearsal space.  Between this and Bajar’s inability to face the crowd unless singing (at least during the earlier part of the evening), The New Pornographers come across as rather stand off-ish.  Since the one or two stage announcements come eventually come across with a genuine coyness, this is clearly never their intention.

‘Moves’, ‘Use It’, ‘My Rights Versus Yours’ come in quick succession and new rocker ‘War On The East Coast’ appears almost musically faultless.  Another new number ‘Dancehall Domine’ allows the band to indulge in various new-wave inspired oohs and ahhs before a particularly infectious chorus – once again – shows Newman and Calder, aided by bassist John Collins and synth man Blaine Thurier,  to be fine singers.  Their keyboard heavy feelgood sound should by now have the audience bouncing, but much like the moment ‘Brill Bruisers’ began not too long before, the attendant crowd seem lacking in energy – most just nodding their heads rhythmically in appreciation. That same solitary figure in the centre, meanwhile, continues going absolutely bonkers.

‘Jackie Dressed In Cobras’- a stand-out track from ‘Twin Cinema’ – provides a highlight during this live set too, despite lacking some of its studio counterpart’s finesse, tackled as it is at a much faster pace.  Despite the pace, there’s no real movement on stage.  Even by some half an hour in, guitarist Todd Fancey (ex-Limblifter) and bassist Collins have barely moved from their chosen spots after taking the stage; Fancey, particularly, doesn’t seem particularly enthused, standing in a darker corner at the rear of stage right.  Maybe Thurier’s more personal demeanour is there to counterbalance this; the plaid-shirted musician seems happy throughout and provides a focal point at the front…or at least as much a focal point as TNP can muster with their rather ordinary demeanour.  Another classic ‘The Laws Have Changed’ sounds fabulous, even despite the absence of sometime lead vocalist Neko Case.  Calder steps up to the task and really shows the strength in her live vocal on this number.  [Case, TNP’s fourth vocalist, is not present on this leg of the tour.  Her absence is not particularly unusual, however, since Calder originally joined the band to fill Case’s place in the live setting, but became a permanent band member in 2006, following the release of ‘Twin Cinema’.  Neko Case, meanwhile, maintains a critically acclaimed solo career in the alt-country field].

At the mid-point, the band offer a particularly reflective version of ‘Adventures In Solitude’, its drum-free first half representing the quietest moment of the ninety minute set.  Unsurprisingly, the crowd looks on in hushed awe as Newman and Calder sing in harmony – this track a showcase for Calder in particular.  Coasting through album tracks ‘Sweet Talk, Sweet Talk’ and ‘Silver Jenny Dollar’ with no real deviation from the studio recordings, TNP eventually arrive at another pair of tunes from their current ‘Brill Bruisers’.  Both ‘Backstairs’ and ‘Champions of Red Wine’ are heavy on the keyboards; the former comes without the vocoder of its recorded counterpart, but all harmonies are present and delivered with aplomb, while the bass shines out a warming bottom end.  It’s only at the end of the set the audience appears to wake up properly and several rows begin to cut loose during ‘Mass Romantic’ a number with a tough jangling riff.  This represents the only time TNP play anything from their debut of the same name and it works surprisingly well without the presence of Neko on vocals. The audience – judging by these three minutes – would have welcomed more old material. Bowing to the audience – facing front – Bejar exits with the minimum of fuss, followed by the rest of the band without a word…not even a minimal thank you.

Returning for an encore, three songs from their masterpiece ‘Twin Cinema’ kind of sum up the gig’s many musical moods in approximately ten minutes. ‘Streets of Fire’ is harmony-filled and uplifting, ‘Sing Me Spanish Techno’ is a sharp reminder of their abilities for catchy hooks and ‘The Bleeding Heart Show’ provides a more moody finale before giving the audience the opportunity to sing on its “hey-la” coda.  Waving goodbye, once more the seven musicians exit the stage without a word and the brightening of the venue signifies the show is over. 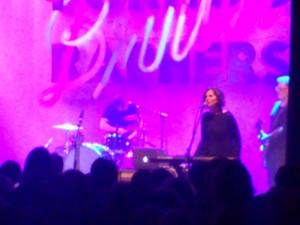 This gig shows The New Pornographers’ creative abilities in a strong light, particularly their abilities to nail tough pop harmonies. Newer material from ‘Brill Bruisers’ sits very comfortably alongside older tracks, almost presenting themselves with an “immediate classic” nature in the set list.  Much like the London gig by fellow Canucks Our Lady Peace a few years earlier, this has been a rewarding audio experience, but, rather sadly, visually non-existent: The New Pornographers really need to work on their stage presence (especially Mr. Bejar).  Maybe their general approach of letting the music speak for the band is a Canadian trait and that never shy Devin Townsend is the odd exception? (let’s face it, that man marches to his own drummer…) Luckily, the New Pornographers material is so strong the performance rarely sags in pace and never appears to drag – their twenty-three song set is over in seemingly half the time of some other bands’ gigs.   Without doubt, for both older and newer fans, after this evening, some of those favourite album tracks will certainly be approached with a new affection…despite the band’s flaws.