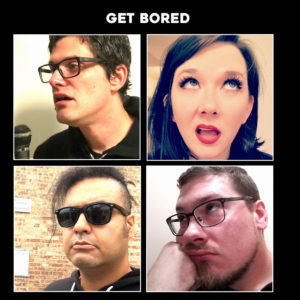 In a very welcome move, ‘Get Bored’ thrusts bass player Jen Buzzkill into the lead vocal spotlight more than ever. Kicking off with something genuinely “cult”, a version of The Amps’ ‘Full On Idle’ takes the punk speed of the Kim Deal original but strips away the manic rockabilly undertones and replaces those with something more traditionally punk – all without ruining the original aesthetic. Jen’s voice is a thousand times better than Deal’s too, and she attacks each line with a full scale cry that’s hugely appealing. A tune that might have been missed by many first time around, this deserves to reach a new audience via this superb rendition. Also showing off Jen’s star qualities, a take on Doris Troy’s old soul banger ‘Just One Look’ (popularised in the UK by The Hollies) gets drenched in fuzzy guitars and reverb, almost aping The Queers’ love of 60s covers in the process. With the noisier elements underscored by a taut bassline and Bass Amp dropping in a solid drum performance, this manages to be a cover with a lot of party spirit without trying too hard.

Keeping with the early 60s, the band absolutely tear through the Bobby Edwards tune ‘You’re The Reason’. Against a speed driven arrangement, lead vocalist Zac Buzzkill adopts a brilliant razor edged performance as he turns in an especially jagged performance. When taken at the Buzzkills’ preferred speeds, the tune’s chorus takes on a fantastic bubblegum punk mantle; it’s incredibly hooky and very accessible – and although only a small sidestep from the sort of thing these guys could churn out quickly, it’s also good enough to persuade first time listeners to backtrack to the band’s two major albums. Also hugely enjoyable, The Jesus & Mary Chain’s ‘Head On’ is remodelled as a timeless slab of UK punk, with two minutes’ worth of pogo-friendly chords casting The Buzzkills in more of a Stiff Little Fingers-ish vein than their usual beloved Ramonescore sound. A huge sneer driving the lead voice certainly gives the performance more of an old-school mood, while the music – although fairly simplistic – has plenty of drive. A dual male/female vocal combines anger and sweetness in a way that the band have more than begun to make their trademark, resulting in a genuine highlight.

Joining the varied tunes from a variety of artists, there’s even time for this punk band to cover another punk band. Although their take on The Guts’ ‘Birds & The Bees’ doesn’t impress anywhere near as much, the harmonies first hinted at during ‘Head On’ come into full bloom, and it’s worth hearing to experience Jen in full cry behind Zac’s throaty rasp while guitarist Gene Buzzkill cranks out a riff that’s got a fair amount of graviras.

This EP might not break the mould, but it was never really meant to. In terms of pulling together a disparate selection of songs and influences, presenting some solid performances and really capturing a genuine feeling of fun, it does an excellent job. With the Buzzkills sounding anything but bored, fans of the band, lovers of the Ramonescore genre and those interested in cover tunes, might just find this to be one of the best freebies ever.