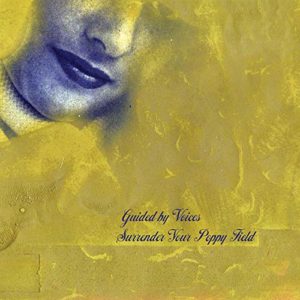 The next two albums – ‘Class Clown Spots A UFO’ and ‘The Bears For Lunch’ (released in fairly quick succession) show a much more focused band; each record isn’t short on fuzzy classics and ‘Bears’ even showed off more of GBV’s rockier side. Things then moved on apace, and excluding the extended hiatus of 2015, fans got at least one new record a year. Most times, they got far more.

As you’d expect from a band where quality control isn’t always a priority, these albums and EPs could be hit and miss – occasionally even horrible; 2016’s ‘Please Be Honest’ represented a rare total misfire – but when GBV were on form, the best bits from this excessive body of work could rival anything they released during their 90s peak. The four album run between 2017’s ‘How Do You Spell Heaven’ and 2019’s ‘Warp & Woof’, in particular, is as fine a collection of recordings as you’ll find anywhere in GBV’s ramshackle world.

Measured against those standards, 2020’s ‘Surrender Your Poppy Field’ – the thirtieth full length album released under the Guided By Voices name – initially seems disappointing. It isn’t anywhere near as bad as the empty ambling of ‘Please Be Honest’, but it often lacks the instant gratification of the sharpest bits of ‘Class Clown’ or ‘How Do You Spell Heaven’. There’s nothing that has the sing-along charms of ‘Chasing Heather Crazy’ or ‘Glad Girls’ (both from 2001’s very commercially oriented ‘Isolation Drills’), or any songs as wonderfully spiky as ‘Dead Liquor Store’ or ‘Daily Get Ups’ from their more recent output. Regrettably, there aren’t any deviations into a GBV approximation of glam rock (as per ‘Pearly Gates Smoke Machine’ from ‘How Do You Spell Heaven’), but thankfully, there isn’t anything as flat-out terrible as ‘Fever Pitch’ (from 2017’s ‘August By Cake’) either. In many ways, ‘Surrender Your Poppy Field’ is a real curate’s egg, but like most curate’s eggs, its a record that benefits from time spent, and any initial disappointments eventually fade.

There are numbers where the arrangements really branch out and, for a band not exactly known for grandiosity, this is a welcome thing indeed. One of these, the relatively lengthy ‘Year of The Hard Hitter’, kicks off the album and suggests GBV are about to take their fans on an epic journey. Its constantly shifting mix of chopping garage rock riffs and slower chugging sounds can seem a little disorienting, but a heavily distorted and slightly off-key vocal is always there to lead us through. Even with a guitar solo that appears to have been written for a different song derailing an already frenetic tune, there’s a lot to enjoy. The kitchen sink approach of gluing three different ideas hints at the weird prog-punk of Cardiacs and even if it doesn’t quite scale the heights of essential GBV, it lends this particular record something very interesting. Almost as smart, the full bodied production and mechanical rhythms of ‘Physician’ are a great reminder of great indie songwriters at work and, initially, the listener gets an unexpected flashback to the ‘Mag Earwig!’ years. Much like ‘…Hard Hitter’, it comes with everything thrown at it in the hope of making something memorable and mostly succeeds. At the point the suspected ninety second jangler comes to a natural conclusion, the band pushes through into a selection of angular grooves. This sounds more like a loose Gang of Four jam than anything within the extended Pollard universe, but is enjoyable enough, before everything switches gears a final time to impress with a harder rock influence and upfront lead guitar break. Another day, Bob might have decided that these three fragments could have constituted three mini tunes, but the bravado shown here makes it the album’s true highlight. …And few would expect GBV capable of ‘Steely Dodger’, a number that applies a measured mix of lo-fi echo to a hulking 70s behemoth that – probably more by luck than judgement – sounds as if it’s been bastardised from a couple of old Led Zeppelin tunes. It isn’t always melodic, but in terms of fusing retro rock that isn’t The Who or anything mod-ish into the GBV universe, it’s still very welcome.

There are even a couple of times when ‘Surrender Your Poppy Field’ aims for a post-psychedelic greatness. At least one of these tracks should have been a stand-out but, despite best intentions, these grand ideas don’t quite work. ‘Arthur Does Business’ has a few flourishes of late 60s cool, but in the main sounds an approximation of a bad Pavement cover of a boring John Lennon tune. It should’ve been much better than it is, especially with its less-than-subtle circus themed deviations, while ‘Andre The Hawk’ never seems to rise above its status as a plodding dirge despite some fine shimmering guitar lines. The problem with both tracks seems to stem from interesting embellishments constantly fighting against a hopelessly bored rhythm section. On another day, with another incarnation of GBV, these could have sounded fabulous.

A genuine oddity, ‘Cat Beats A Drum’ – intentionally or otherwise – sounds like a thoroughly imbibed version of The Doors, unsure of whether they’re content just jamming on a riff, or whether the session actually started with a more focused set of ideas. Such things shouldn’t surprise on a GBV album by this point, but this track really stands out – for better or worse. For the long-term fan, there’s a genuine comfort to be found in ‘Cul-De-Sac Kids’, a concession to GBV’s more commercial side. Various ringing guitars are used to create a simple melody, drawing from the kind of sparseness that gave ‘…Snowman’ such a big heart, before breaking into a full-blooded jangler. Even this has moments where disparate musical strands have come together in unexpected ways: a tune that could’ve settled for sounding like an ‘Isolation Drills’ callback takes time with a few slower riffs and…some whistling melodies. It still doesn’t reach the heights of ‘Surrender’s few true gems, but it’s pleasant enough with its over-familiar style.

Beyond that, there’s not so much invention – and regrettably, in a few places, there’s not always much spirit. ‘Always Gone’ and ‘Queen Jammer’ are jangly 60s inspired tunes that could’ve been recycled from several dozen other GBV albums – never bad, but very much the kind of thing you’ve heard from Bob and co at least fifty times; ‘Whoa Nelly’ calls back to the boombox recordings of ‘Vampire On Titus’s now distant past, but instead of sounding like a worthy lo-fi experiment, it just sort of exists – almost as if the band have become self-parodic and as if its been accepted that a GBV album needs one of these for legitimacy, and ‘Stone Cold Moron’ lumbers tunelessly across two and a half minutes with nowhere to go and a feeling that it wouldn’t actually know what to do if it got there.

Any fan who’s worked through some twenty plus studio albums, a selection of EPs and countless Pollard side projects will happily put in the work that’s needed to reap ‘…Poppy Field’s golden moments. When you discover them – like with other “lesser” GBV records – that work becomes its own reward. That said, this is a more hit and miss collection than anything else GBV have released since 2017 and with a fairly even ratio between good, bad an indifferent material, it suggests that releasing five studio albums in a little under two years is possibly two too many…