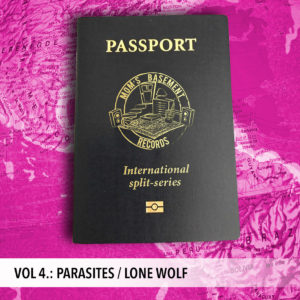 Reason enough to pick up this EP as a download, ‘No Sleep Tonight’ crashes in with a fantastic pop-punk riff overlaid with a classic lead, suggesting a great track is afoot. Once Dave starts to sing and it becomes very clear that the track’s main vocal melody is hugely reminiscent of his old classic ‘Crazy’ (the opening number from 1993’s indispensable ‘Punch Lines’ LP) it’s evidence enough that he still knows his way around a power-punk-pop classic; when on this kind of form, he seems almost untouchable. The second Parasites offering ‘Nowhere Near Me’ cranks the gears for a straight-up Ramonescore banger, showing off the other side of the band’s stock sounds more than admirably, even if it occasionally sounds like something from the Ben Weasel back-cat.

Lone Wolf take a different approach on the first of their two numbers, as ‘Meet Me In The Middle’ harks back to the days of power pop’s glory years. With a full compliment of buzzing lead guitar riffs applied to a poppy sound, it’s easy enough to think of Holly & The Italians, but this Dutch outfit’s work presents a tougher production sound. A couple of listens is enough for the main melody to stick (even if the chorus hook doesn’t quite live up to early expectations) before the spikier ‘After Dark’ mixes influences from The Muffs and early Tilt to great effect. It’s very much a track that shows how Lone Wolf often value taut rock-pop hooks more than taking the easy Ramonescore approach, especially once the chorus blends tough drum rolls with a sneering vocal. After going a couple of rounds with a great melody and hook, the band branch out as they pull everything to a close. With an extended instrumental section that allows the lead guitars to add a pleasing counterpoint to a classic sounding melodic punk backdrop, it seems much more inviting. Clocking in at over three and a half minutes, it’s quite long when measured against the more typical punk standard, but with three strong musical ideas coming together, the track never drags. If anything, it suggests that Lone Wolf have a great crossover potential.

Most split releases feature an obviously superior band, but ‘Passport Split Series Vol. 4’ brings together two acts that are so different it’s actually impossible to tell which is the stronger. There’s plenty of gold here for both pop punk and power pop fans to enjoy. If you’ve never heard Lone Wolf previously, this provides a great introduction and if you like what you hear, their self-titled disc from 2019 is worth seeking out. As for the Parasites, it’s likely you still treasure those well-worn copies of ‘Punch Lines’ and ‘Solitary’, so you pretty much know what you’re getting here…but when pop-punk works as well as it does on ‘No Sleep Tonight’, that’s surely no bad thing. A highly recommended release.