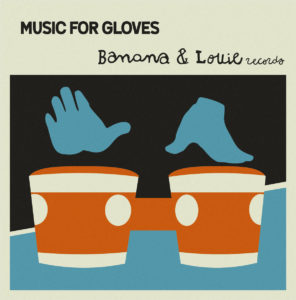 Stoltz should be familiar to many, since not only has he worked prolifically since the 90s and had associations with Sub Pop and Jack White’s Third Man Records, but his fascination with Echo & The Bunnymen has become almost legendary. In 2001, he covered their ‘Crocodiles’ album in its entirety in a lo-fi fashion; he’s also performed their songs regularly during his live sets. His uber-fandom eventually paid off when he became The Bunnymen’s rhythm guitarist on their tours between 2016-2018. Ellis has had an equally prolific career, having worked as sideman to Edwyn Collins, Shane MacGowan, Gemma Ray and Saint Etienne, as well as fronting his own band, Colorama. Hearing some of their work side by side, it’s clear that each performer compliments the other despite stylistic differences and although the four songs on this download aren’t especially flashy, their fuzzy indie qualities certainly capture a moment in time.

Stoltz’s ‘If You Don’t Know What To Do (Do What You Love)’ combines an off-key moody croon and a heavily structured rhythm. Its heavy 60s jangle almost sounds like Teenage Fanclub deep cut played through a Bunnymen-obsessed prism and it manages to be hugely entertaining despite sounding like two different musical ideas that have been forced together. After you’ve spent the first verse attuning your ears to a voice that doesn’t always fit, there’s a tune that’s ready evoke a lot of 90s memories. Even better, ‘Uncertain Styles’ takes a Rolling Stones-eques riff, puts it through the garage rock mangle and applies it to a pseudo-psych groove. It almost sounds like someone impersonating Ian McCulloch covering Bowie, while Bowie covers The Pretty Things on his ‘PinUps’ LP. There’s so much that seems familiar within the heavily layered sound that conventional wisdom suggests it should be a cover tune…even though it isn’t. Factor in a weird post-punk pre-chorus loaded with an echoing “oi” refrain and the track becomes a genuinely quirky treat. Be warned, though, it comes loaded with the kind of simple hook that’ll stick in your head for a week.

The best track on this download, Carwyn Ellis’s ‘Cardigan Bay’, is a really lovely lo-fi tribute to his Native Wales and although the recording sounds like it has been lifted from a fifth generation cassette dub, it’s still possible to become besotted by its kitschy instrumental charms. A lilting little tune, it chief influences sound not unlike a Georges Delarue score for a mid 60s French Film – or indeed an interlude from a Saint Etienne album. With keyboard sounds approximating a vibraphone playing very European melody, it all seems very French despite soundtracking Welsh holiday memories. The second contribution from Ellis is rather more of the “filler” nature, since it’s a previously unreleased demo of ‘Apocalypse Blues’ from Colorama’s 2010 LP ‘Box’. The demo is stripped of the vocal effects and uses drum machines in place of the final version’s natural rhythms, but in some ways, its purity makes it superior. The untreated vocal is far more sedate and the opportunity to hear the once echoing and reverbed guitar part replayed in a soft jazz tone – like hearing an indie musician tapping into the tones of Grant Green – is more than welcome.

This release is well worth the €2 asking price. If you love Saint Etienne, KPM library discs and other lovingly retro trinkets it’s worth that small sum for ‘Cardigan Bay’ alone, so grab yourself a soundtrack for the Welsh coast and then stay for the rest… You won’t be disappointed.