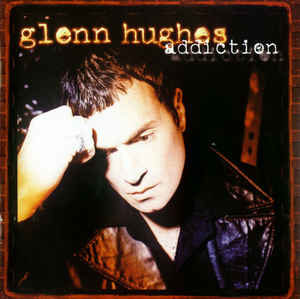 ‘Death of Me’ sets the tone for the record with a high octane workout that at first sounds like a grubbier version of Deep Purple’s ‘Burn’, before easing into a chorus that harks back to the couple of heavier moments from the Hughes/Thrall album. While more than a one-line chorus would have been welcome from the veteran songwriter, the track just about gets away with such simple repetition due to its darker tone and subject matter. Looking beyond that, everything else it’s fantastic. Hughes’s voice is at its most forthright for a decade; he moves between the moodiness of the verse, a scream on the pre-chorus and finally a dirtier maturity on the chorus as if tackling such a range is easy. Marc Bonilla’s guitar tones retain just enough of a classic rock style to be sympathetic to Glenn’s voice, but the fact that they carry a grubbier feel than some rock fans wanted only shows how Hughes and his band were clearly keen to release something contemporary. Overall, it works excellently…and if you suspected this album couldn’t get heavier, you couldn’t be more wrong. Potentially the heaviest tune within the Glenn Hughes catalogue, the title cut is fabulously heavy. Part Dio era Sabbath, part grunge, part Kiss’ much derided ‘Carnival Souls’ and yet all Hughes, these four minutes crank and lurch as the band works a superb riff. Glenn curls his voice with a real force and since it’s a track with such a great presence, it even gets away without having any kind of chorus, but lovers of a heavy groove will find an instant love. Factor in a howling lead guitar break and the heavy riff finding even more of a footing as Glenn rises to full scale scream and it becomes a 90s rock classic – the very definition of buried treasure.

Falling somewhere between these two tracks, ‘Down’ is truly excellent. Bonilla delivers a guitar sound that veers dangerously close to ‘Dogman’ era King’s X on the verses, and it creates something broadly appealing. Having hit upon a slightly more groove oriented riff, Hughes finds a more soul-edged voice providing a superb contrast. At the point the band heavies everything up for a really chunky chorus, the vocals escalate accordingly. Moving through a sharp edged guitar solo and a second outing for a chorus that settles somewhere between King’s X and ‘Dysfunctional’ era Dokken, it becomes one of the album’s real stand outs. ‘Cover Me’ seems to opt for similar heaviness at first, but after utilising a chunky intro, its actually a number with a much broader sound. For the verse, everyone dials back to allow Glenn to deliver a more soul-oriented vocal, but there’s still a darkness lurking within the low-key sounds that back his voice. During the pre-chorus, the arrangement is somewhat stodgy, but it all makes sense once the intro riff returns to drive a heavy blues inflected sound. In many ways, its relentlessly slow pace and slightly leaden feel means this isn’t the album’s best track, but between a very strong vocal and interesting lead guitar break, there’s enough to satisfy the bigger Glenn Hughes fan.

Moodier still, ‘Blue Jade’ takes a slow pace and applies various oddly tuned guitars, at first suggesting another number that might be hard listening for some. However, Glenn’s on hand with one of the album’s finest vocals and his curly voice instantly lifts what could have been a deathly slow tune. The chorus finds “The Voice of Rock” in spectacular form as he revisits part of his range that harks back to Hughes/Thrall, with a loud but soulful trill. It’s one of those tracks that takes a few listens to really appreciate, but eventually, you’ll discover a lot of power within the moody tribal rhythms and understated guitar work as well as the vocal. ‘Justified Man’, meanwhile, takes an intro that veers dangerously close to Alice Cooper’s 1973 classic ‘Elected’ before exploding into a hefty blues-edged rocker that would suit Paul Rodgers. In fairness, it sounds like a bit of a throw back to 1992’s ‘Blues’ album and while it doesn’t seem like an entirely natural fit with the rest of the album, it’s hard to knock the overall performance. Whether heard in bluesy croon or full on rock wail, Glenn takes everything in his stride, often letting his natural talents shine. It’s all very enjoyable stuff, even if it seems a little more throwaway, while ‘I’m Not Your Slave’ mixes some very early 90s sounding hard rock chops with a funkier feel. A harder take on funk than most of the previous year’s ‘Feel’ had allowed, Glenn sounds as if he’s having a great time steering a very strong vocal through some great sounding melodic rock. The guitars constantly tease with a choppier style and drummer Joe Travers maintains a huge presence throughout. Although this is clearly designed to appeal to those fans of Glenn’s more melodic chops, a really heavy bridge muscles in and although it never derails the melody for long, the brief detour makes it a closer fit with a lot of ‘Addiction’s material. It’s a number that can be appreciated in various moods, making it another highlight.

For fans of the funkier style, ‘Madeleine’ lays down a ferocious groove that’s part melodic and part dirty, pre-figuring some of the material on 2003’s ‘Songs In The Key of Rock’. Although far too low in the mix, the bass carries a hard sound throughout, but even the most forceful bass playing sounds thin if directly measured against the vocal. During most of this number, Hughes adopts a full on scream, proving that his old 70s voice is still intact and while everything would have sounded so much better with a decent chorus, there’s more than enough energy to see this rocker off nicely. For those approaching this record hoping for a bit more AOR in the mould of 1994’s ‘From Now On…’, ‘Talk About It’ will be an instant favourite. The melodies show hints of many of the melodic rock greats: soaring guitar leads evoke Strangeways and Giant; the soul drenched vocals carry more than enough of an old westcoast influence and a warm bass links everything with ease. In some ways, this feels a little wasted hidden among a lot of heavier material, but in others, it definitely gives ‘Addiction’ much more of a feeling of balance. A must hear.

From a lyrical perspective, ‘Addiction’ is Glenn’s most personal album, but in ‘I Don’t Want To Live That Way Again’, he takes the listener somewhere more introspective than ever before. A song that explores the album’s recurrent themes of addiction in a more reflective way, this finds the vocalist musing upon his current state and how the only way to escape from darkness is by taking a forward journey into the light. This ends the album on a note that’s rather solemn, but within that solemnity there’s a lot of magic. Carrying a much cleaner tone, Bonilla’s guitar playing is often more understated (especially during the number’s first half), but he offers a sparse guitar line that shimmers with hope. He knows Glenn needs to be the real focus throughout this track and, indeed, Glenn fills the epic eight minutes with a powerhouse performance. To begin, the voice cries gently, revisiting sounds and moods that’d carried most of the previous year’s ‘Feel’ album. Glenn sounds suitably fragile against the vaguely new age guitar work. Bringing in the rest of the band gradually, the number eventually reveals that it has a chunky riff at hand, but this is merely used to signify the rhythm. The heavy lifting continues to come from Hughes, who by the track’s mid point, has stretched from soul to rock voice and by the time the big climax comes, he can be heard in full scale wail while the rest of the band go about their business with a broadly theatrical arrangement. The way this number builds is pivotal to its all round success; the gradual increase in tension and power means that there’s something new to be heard with each passage and, as such, the lengthy recording never drags. Like ‘Talk About It’, on first listen, it feels as if it has been bolted on to the end of the wrong album, but in time, it’s clear that this closing number is actually the album’s most important offering – melodic, cathartic and heartfelt, it gives Glenn’s addictions – and ‘Addiction’ – a genuine closure.

If somehow you’ve never heard this record, you need to right that wrong. Along with ‘From Now On…’, ‘Feel’ and the earlier release by Hughes/Thrall, it rounds out a well-curated collection of releases that, when heard together, presents almost the full spectrum of Glenn’s musical abilities. Simply put, ‘Addiction’ is one of the all time great Glenn Hughes albums; a record to miss at your peril.

[‘Addiction’ is available as part of a Glenn Hughes box set from Cherry Red Records/HNE Recordings, ‘Justified Man’, bringing together his six solo albums from 1995-2003]