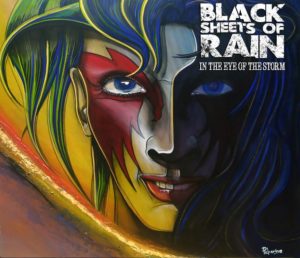 After an intro that sounds like a cross between an old sci-fi soundtrack, a deep cut from Tangerine Dream and a walk through a futuristic underground network, the band firmly grasp “the rock” with both hands on ‘Still Spark Something’, a melodic heavy metal workout that sounds fresh out of 1983. This isn’t a criticism – in terms of reaching for that retro sound, at least musically, it’s something that Black Sheets of Rain do very well and the authenticity in such an old-fashioned approach is bolstered by the production values. In the producer’s chair, the legendary Tony Wilson brings a very retro and pure sound; one that’s heavy on the drums and treble, very much giving the track an authentic feel, almost as if the digital files were ripped from a vinyl playback. A strong chorus also lends a very 80s charm, as does a ripper of a guitar solo from Davenport, something that more than makes up for his lead vocals being…an acquired taste. Nevertheless, he gives his all and with an odd Ozzy-esque twang in places, his very natural delivery sort of fits the sense of energy that Black Sheets seem keen to convey here. With a deeper, Sabbath-ish sound at the outset, ‘No Rest’ is much better. A heavy riff sets the tone quickly, while the combination of heavy toms and dirty guitar lines soon conjure more NWOBHM memories in the way their no-frills style very much dominates. Throughout the track Davenport over-sings with glee – his voice settling somewhere between the gruffer end of a Bruce Dickinson take circa 1991 and the bombast of Tony Martin – but, as before, it’s probably his command of a riff that leaves the best impression. The track barely deviates from its early battle metal styled tropes, which gives Nuttall a solid if undemanding workout very much bolstered by Lambourne’s four strings. As before, Black Sheets of Rain bite their collective thumbs at fashion and transport their listeners back to their 80s bedrooms, but it’s all very good natured, especially when Rich’s old bandmate Tony Dolan steps in for a horror themed spoken interlude…

With a much harder guitar sound atop a solid groove, ‘Through A Storm’ starts out like an old deep cut by Judas Priest, before sliding into something with a touch more melody on the chorus. The use of a call and response vocal makes this track stand up from first listen. It’s easily the EP’s best – and that’s something reinforced by not only a much catchier hook, but also by Davenport taking a little time to deliver a corker of a solo. ‘Force of Habit’ introduces some more forthright bass work on a faster number that largely succeeds due to its well-judged nods to old NWOBHM riffs and a lot of energy. Nuttall’s drum work sounds pretty unshakable, even an unsympathetic final mix doesn’t always make his kit sound as good as it could. By the time the band pull the main riff out one last time, there’s very much a feeling that the recording session had been an enjoyable one and some of that enthusiasm rubs off on the listener in the process, while the set closer, ‘Weight of Shadows’ settles on something moodier. Reverting to a slower and slightly sludgier sound and with lyrics dealing with depression in a very pointed manner, in lots of ways, it’s the most direct track, but you can’t be too vague when delivering an essential message. Musically, the heavy interplay between Davenport’s guitar and the complexities of Lambourne’s basslines give the number a lot of heart and while it isn’t markedly different from anything you’ll have heard up to this point, at the very least, it closes this debut with another of Black Sheets of Rain’s best tracks.

In terms of New Wave of British Heavy Metal pastiches, this is made with so much love, it’s easy to forgive any vocal shortcomings. Let’s not forget, for every Bruce Dickinson or Bernie Shaw the NWOBHM offered at least three dozen very enthusiastic but less perfect vocalists like Jess Cox. Black Sheets of Rain have enough mastery of a riff and knowledge of metal’s rich history to counteract this with some solid music throughout. While not always destined for much beyond a cult status, getting Wilson to produce was a master stroke…and that’ll be enough for a good few people to check this out. The band very clearly knows the audience at whom they’re pitching this release and, in turn, a good few of that audience will be delighted by the material here, rough and ready or otherwise.

The EP can be purchased HERE.  All proceeds will be donated to Ian’s Chain, a charity that helps those dealing with depression and suicidal thoughts.