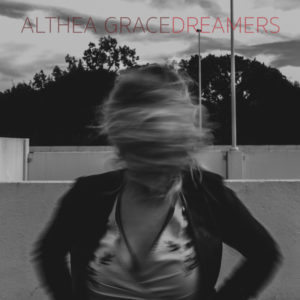 Sheryl Crow’s place in this story seems fitting, since Althea sounds a little like Sheryl on parts of the EP’s opener ‘Blow Them All Away’, a rousing pop-rocker with a slightly rootsy undertone. The music has a friendly retro warmth that’s instantly endearing: the drums lay down a steady backline – the kind of thing that the late Levon Helm would have loved, while a stabbing piano hovers somewhere between singer-songwriter climes and classic pop. Holding all of that together, the basslines are complex without feeling showy. This gives Grace so much to work with and the fact that she’s able to effortlessly tap into a performance that’s not only Crow-esque (specifically from the ‘Come On Come On’ era), but actually better than that. The title cut ‘Dreamers’ introduces a soft and almost jazzy musical backdrop, with subtle acoustic guitars joining a jaunty piano and organ. The slightly more low-key style shows off a really classy band working with something that occasionally echoes Once Blue and Kami Lyle, while Althea’s slightly warbly tones wander into a territory that’s hugely influenced by Stevie Nicks. It might not be as immediate as the rest of the material, but what transpires is a track with a genuine sense of longevity. Managing to inject a little jazz into proceedings without becoming obviously lounge shows a sense of an artist who understands that the small details are important.

If ‘Dreamers’ sounded as if Grace were channelling Nicks, then the brilliant ‘Hold Me’ flaunts a Stevie love with absolute joy. Her vocal style is even more wobbly – it’s an endearing affection that’s more subtle than Nicks’s post 1987 bleat – and as if knowing nothing else will quite work, the band drop into an old Fleetwood arrangement that befits such a performance. The bass plods as if John McVie has wandered into the studio and laid down an anchoring thud and the rest of the music grows from that root. As with the previous tracks, you’ll hear a retro heart, but it’s all recycled with love and the way an electric piano occasionally pierces through the guitar and bass is lovely. Song-wise, this delivers on a great chorus that stands strong at first and then finishes with a great harmony. As far as Fleetwood Mac tributes go, it’s anything but subtle, but it’s probably the best you’ll ever hear! Last up, ‘Trapped’ is a stomping tune that mixes light rock with a slight country tone, ending up somewhere between Sheryl Crow, Stevie Nicks and the lightest works of Gaslight Anthem’s Brian Fallon. Again, the whole band excels: there’s a great focus on the bass drum, although this never gives into temptation to steer things too far in a rousing folk-rock way, more a solid way of lifting a great rhythm and bass. – always making sure there’s little doubt as to who’s in the driving seat here – sort of mixing up both her main vocal styles into something a touch more forceful. The chorus might be overly simple, but she takes the lyric and pushes it forth – her voice cries out above everything in such a fantastic way, you can’t help but be drawn into the performance.

On these four recordings, there’s a seventies heart and nineties accessibility meeting somewhere in the middle. Lovers of Sheryl Crow and Stevie Nicks should be right at home; those who wish Lissie had a bit more scope may also find something hugely appealing. Other listeners always on the lookout for great singer-songwriters should definitely make sure Althea Grace and her band are on their radar. In short, pretty much everyone who digs solid adult pop-rock has a good chance of loving this. There are a lot of words that could be used to sum up this EP, but “pop classic” seems to fit the bill. Yes, it really is that good…