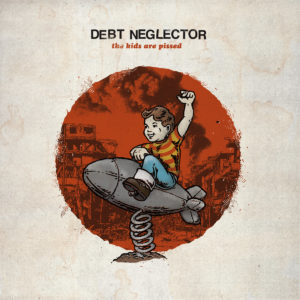 Orlando four piece Debt Neglector’s 2018 EP ‘The Kids Are Pissed’ constantly treads a very fine line between angst and melody to bring six tracks that are often as big on chorus hooks as they are on riffs. For those who still lament No Use For A Name’s shift into a poppier realm (and subsequently their untimely demise), or love Hateful Monday, this is a must-hear.

The EP’s genuine highlight, ‘Go Fund Yourself’ adopts a fantastic melodic hardcore stance, falling somewhere between the earliest No Use For A Name and Strike Anywhere, but with much bigger balls. The arrangement has a huge crunch throughout, thanks especially to an overdriven bass, but it is perhaps the lyric which is of most importance. A huge, angry swipe at the expense of medical care in the US – with a pointed concern about the fact that insulin and other life or death essentials are expected to be paid for out of the wages of those whom need them – it’s anger is more than justified. The juxtoposition of the song’s title with “Go fuck yourself” might seem like a really obvious hook, but when delivered with such intensity and integrity, it really works, and it ultimately ends up playing on a loop in your own internal jukebox. In just over a minute and a half, Debt Neglector show all their best traits, which welded to an infectious hook, results in something you’ll want to hear again and again.

The rest of the release, although short, manages to pack in a lot of other great moments along the way. After an angry burst of noise, ‘Scared of U.S.’ features a huge ringing guitar riff, underscored by a rhythm section that has an amazing punch. It’s when moving from the verse into the chorus, though, that Debt Neglector’s gifts for hardcore melodies win out; a vocal with a John Feldmann-esque twang is constantly out front and centre, but it’s the guitar work that leaves the most indelible impression. The riffs come with a genuinely grubby edge that helps the band sound a little fiercer than most of their potential peers. Although it’s rather more of a slow burner, an atmospheric and arty breakdown with more deep bass en route demonstrates a sense of adventure and shows off some great playing. ‘R.P.F.O.’ comes loaded with tough, thrashing riffs placing the band somewhere between Good Riddance and early NOFX; it’s an over familiar style, but is expertly played, with a furious drum performance where various fills echo Good Riddance in an almost flawless manner. Building up to some great gang vocals and a pay-off line putting down racism, this sounds like a number that’ll be even more aggressive when played live, whilst the title cut pushes forth with some weighty toms joined by a melodic vocal. As before, it’s very easy to hear influence from Strike Anywhere, Good Riddance and their ilk, but Debt Neglector’s musical skills are every bit as good – and tight – as their forefathers. Straddling a fine line between street punk and melodic hardcore while offering another massive chorus, it’s another of the band’s best tunes. It sticks firmly to familiar genre constraints, yes, but in lots of ways it’s all the better for it.

Elsewhere, ‘Wrong Side’ is a short and sharp punky attack that turns everything up an extra notch with a call and response vocal within the chorus. With a couple of musical bridges that usher in muted chords, it shows again how Debt Neglector use tried and tested skills very effectively, whilst ‘New White Rose’ shows a leaning further towards pop-punk with a little Lawrence Arms influence. The latter shows off the band’s major love of a rattling bassline even better than before; when exploding into the chorus, the rhythm section is especially impressive. All things considered, if you love melodic hardcore, you’ll be in your element here.

With a better production sound than on their 2017 LP ‘Atomicland’, this EP is a step forward for Debt Neglector. With some heavier riffs set to smash through everything, they sound every bit as good as most similar and better known acts you’d care to name. With a couple of choruses set to eventually become ingrained in your noggins until they become an annoyance, the song-writing is also very strong. With about a thousand DIY punk releases appearing on Bandcamp every week, there are a lot of punks vying for attention, but make sure you make some time for these Floridian lads – they are more than ready for the big time and a bigger audience.