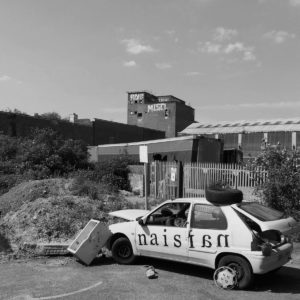 ‘Rejoinder’ ends a five year haitus for Naisian, but after a minute or so of hitting the play button on their 2018 EP, it seems almost as if the Sheffield metallers have never really been away. The three tracks that make up this absolutely devastating EP come loaded with heaviness, bringing forth a swampy and sludgy sound that often makes the Melvins and Goatsnake sound like mere lightweights.

If you’ve never heard the band before, then ’90ft Stone’ is the perfect place to dive in since the riffs come with the kind of weight such a sizeable lump of rock would likely have. Hugely downtuned, the main groove is slow, like something on loan from Morag Tong and then cranked through Conan’s distressing distortion. As if that wouldn’t be enough, it’s then made more confrontational with atonal guitar effects bringing shrill notes as a counterpoint. By the time the vocal arrives, the main riff has become the ultimate in sludge; the force of the music is made even more impenetrable by a deep growling. The second half of the number taps into an instrumental section where the main riff is just played over and over: Naisian have no time for detours, solos or anything resembling a middle eight – it really is all about the relentlessness of their musical swamp. If you like that, you’ll be in sludge metal ecstasy and possibly even disappointed that this is all wrapped up within four minutes. The likes of Mammoth Weed Wizard Bastard may well take fifteen minutes to make a similar point, but what ’90ft Stone’ does, it does flawlessly. With more of a groove, the EP’s best track ‘Mantis Rising’ starts out like something from an old Down record, before increasing the tension with a more sludge-oriented riff. Again, it’s all about how the repetitious heaviness embeds itself, but just as impressive is the way the band have decided that one death-rattle growl isn’t enough. At various points throughout the number, guitarist/vocalist Adam launches into an intense call and response with bassist Michael, whose voice in turn appears just as threatening. Where to go from there? There are other points in the song – if you could be so brazen to call it a song – where drummer Jordan wants in and the trinity find themselves growling in unison, bringing a whole new slant to the idea of three part (dis)harmony. Musically, the rest of this track is also fantastic, provided you like it good and sludgy: the bass is devastatingly deep and a couple of the drum fills even suggest that, sometime, Naisian might stretch out to something more complex. They never do, of course, preferring instead to crush their fans with wanton repetition. …And when the riffs are this good, it’s hard to blame them.

Finally, ‘Lafole’ presents something with a greater drum presence and an unexpectedly spacious verse. The unsettling qualities of such a confrontational voice against the relative quiet recalls the disturbing works of Transatlantic proto-sludgers Craw, but the core of the more typical Naisian sound is never far away. Between the howls of fury, the guitars amp up to create another great riff in the heavy doom/sludge tradition; a final reminder of how Adam’s playing isn’t just about presence, but also comes with the kind of tone and class that should appeal to fans of classic doom/sludge bands like Sleep and Crowbar. With the cleaner, quieter tones eventually underscoring the heavy sludge for a final verse, the band up the ante for crushing noise by ushering in a dual vocal with some genuine weightiness. Ending the number abruptly, it’s almost as if the band have thought “that’s it – the puny ears won’t take any more…our work here is done”, yet at the same time, the choice to end things so unnaturally is definitely striking.

The best elements of the core sound of this release are also pumping the relentless heart of Allfather’s ‘And All Shall Be Devastation’ and the less proggy bits of Boss Keloid’s ‘Melted On The Inch’, so in many ways, Naisian find themselves against some pretty stiff competition in the heavy stakes. With the sludge scene thriving, though, they’ve also picked a prime time for their rebirth. With absolutely no time for any kind of flamboyance, ‘Rejoinder’ values riffs over hooks and heaviness over everything at pretty much every turn. It’s a sludge fan’s dream. Seek it out at your own peril…there’s every chance it’ll have destroyed your senses within three months.