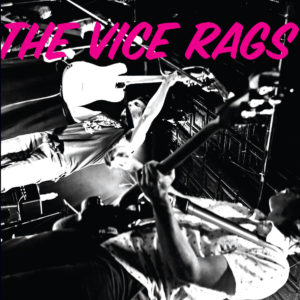 Keen to shake things up, this disc kick off with a raucous rock ‘n’ roll garage stomper. ‘Shut Up ‘n’ Love Me’ sounds like a supercharged Real Kids colliding with a Jack White demo. The twangy guitars power through thick and fast; Elvis powers things further with some furious basslines and all together, the band seem fixated on making some noise. The noisy aspect is heightened further by a distorted lead vocal and slightly off key harmonies, suggesting this was always about energy rather than perfection. If the hastily recorded tunes from the last Readymade Breakup EP had more time spent on them, the results might’ve sounded like this. Overall, aside from the sense of energy – something the band are keen to put across – this is reasonably disposable, albeit very much on purpose. A cover of Little Richard’s ‘Lucille’ mines a similar uptempo garage rock/punk rock hybrid sound, but perhaps due to the familiarity of the material, fares much better. Frontman Paul Rosevear approaches his vocal with force, but always pulls back just enough to allow a more tuneful edge to be heard. Also, when it comes to aping Little Richard’s trademark yelp, he never overdoes things; instead, he just reaches for the extremes when he feels its completely necessary. The dual guitar attack is fast and furious; Chyb works his way through the high speed rhythm with the kind of ease you’d expect for a drummer with a twenty years experience and Elvis rattles his bass with intent. This kind of rock ‘n’ roll cover is just bread and butter stuff to these musicians, but to be fair, they still sound like they are having a blast. Maybe you will too.

With regards to the rest of the material, not only is it better, but also has far more character than just fiery garage rock chops. With a bag of bar-room swagger, the two guitar approach of the band makes a full and blusterous sound on the no-nonsense ‘Jersey Boy’. While this might sound a bit like a Watts homage in places, there are touches throughout that make the track stand up well on its own merits. Taking a strong hook and old style riff, The Rags work a tried and tested sound to their advantage, with Rosevear’s vocal seeming very confident. A similar mood informs the slower ‘Hey Alright’, a loving Stones tribute on which there’s another fine vocal and the lead guitars lull and chop like Keef sitting in on a jam with the Black Crowes. Those looking for similar retro sounds played with four times as much vigour will get an instant thrill from ‘Out On The Street’, a retro and rough ‘n’ ready bruiser that ties the ghosts of The Replacements and the Jersey vibes of The Gaslight Anthem together in a thoroughly enjoyable pub rocker. Throughout this number, an upfront bass punches through the relentless jangle, always giving The Vice Rags a very full sound. By the time a quieter breakdown is reached, thus leading everyone into one final rousing chorus, this has proved to be a definite highlight.

The absolute essential listen in this bunch, though, is ‘One Heart’. Very impressive all round, the band throws out their noisier traits and instead showcases great alternative pop/rock with a very 80s bent. The way this number places huge ringing chords against a driving bassline gives it a truly classic style. It’s a great – if a little surprising – vehicle for all concerned. Its insistence on callbacks to a power pop past instantly recalls the more melodic later works of Psychedelic Furs, along with a touch of Kyf Brewer/Ravyns and lot of love for the 80s college rock scene. Looking beyond the main melodies, the chorus isn’t massive but works very well, while an old-style lead guitar steps up occasionally to make an impression. Where did this come from? It’s fairly different to most of The Vice Rags’ usual sounds, but it’s very welcome indeed. This is the radio hit from 1984 that never was.

In their own words, after numerous bands, it took over two decades for The Vice Rags to eventually come together, but whether or not you’re actually familiar with any of the other acts in their family tree is almost immaterial. It’s what’s here that counts for the right here and right now…and these four guys seriously bring the rock ‘n’ rolls on the bulk of these half-dozen cuts. It may be the sum of its influences; at just six tracks, it may be all too short; it may be a slight variant on a couple of the best bands from the Rum Bar Records staple. But…and it’s a big but, with all that said, if The Vice Rags turned out to be a one shot deal (and Elvis gets the restless feets again), they’ve already made their mark here. The combination of feelgood sounds and general familiarity – that first number notwithstanding – results in a real winner of a debut, short or otherwise.