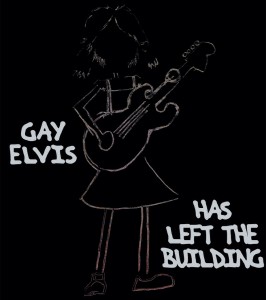 ‘Good Man’ catches the ear instantly with a particularly hefty beat from a crisp drum sound.  Over a tough backbone, Elv rattles an overdriven bass occasionally making a rather edgy buzzing sound that compliments the drums well.  Balancing these edgier elements, an electric guitar in the right channel adds intermittent melody, while a duo of voices lay down a suitably catchy tune.  After the opening verse, the whole band explodes into a frenzy, the tough power pop showcasing a strong love of The Posies where the guitars echo furiously, while a strong chorus brings everything together into a near-perfect two and a half minute musical nugget.  More Posies influences collide with an almost Beatle-esque sensibility (re: ‘Abbey Road’ era) in the harmony department, but throughout, the musicians use these touchstones in a way which somehow sounds fresh…and, more importantly, exciting.

Unbelievably, ‘Sing When I’m Alone’ is even better.  The guitars keep their ringing tones – essential for elevating things from the saccharine to solid – the drums again are heavily present (this time paying a quasi-homage to ‘Be My Baby’ and the Phil Spector productions), in contrast to an aching and somewhat hushed vocal performance on the verse.  Stepping up a gear for a particularly fine chorus, the voice blooms into something more joyous – especially when backed by such full harmonies – and the guitar lines echo work by Teenage Fanclub and cult UK artist Nick Capaldi in their late 60s splendour.  Coming to a natural close at just past the three minute mark, we finally get the pay off line…while there may be a perceived sadness in the idea that our protagonist’s muse (possibly the baby daughter) makes him sing in solitary, he opines that that every minute spent together “is perfect”.  This track nears power pop perfection.

Finishing this trio of power pop nuggets, ‘Lucky’ starts with a rather old fashioned bluesy lick before settling into a moody groove affording the tough guitar sounds plenty of room, while Elvis’s lead vocal maintains an aching quality, with his higher registers cracking with fragility.  The slow riff that makes up the bulk of the tune shows a different side to these recordings, but it’s the guest appearance from ex-Readymade Breakup man Matt Jaworski that lends the best performances. Both his swirling organ lines and slide guitar solos are impeccably played and as his final solo echoes in the memory and the music fades, there’s a strong sense that everything has ended too prematurely.

It may be short but, as they say, the best things often come in small packages and  what we have here are three near-perfect recordings.  The music is undeniably strong – the sentiments even stronger.  These songs are so heartfelt, they deserve to reach a wide and appreciative audience.

[The EP can be streamed in full below.  It’s also available for download on a “pay what you want” basis, meaning you can nab it for free, but if you feel like throwing Gay Elvis a few bucks, he’ll appreciate it.]