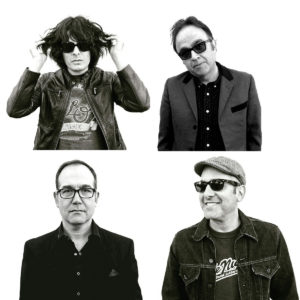 The resulting EP features a few really obvious cuts – late 50s/early 60s rock ‘n’ roll being very much a staple for these musicians – as well as a homage to a homage and one total curve-ball. It’s with that curve-ball the EP begins as these cult garage rockers put their mark on David Bowie‘s 1972 single ‘Drive In Saturday’. The more upbeat nature of Bowie’s ‘Star’, ‘Hang On To Yourself’ or even ‘Watch That Man’ would have been safer bets, but against the odds, they actually do a reasonable job on this woozy, slower number. Penalosa’s voice is a little wayward on the verses, occasionally sounding more like Bob Geldof than Dame David, but he really comes through once the big key change is hit for the chorus. The rest of the band, meanwhile, turns in a solid performance. While nothing is especially changed from the original arrangement, the electric guitars are a little louder and work well set against a prominent acoustic rhythm, while the drums come through in a stately and sure manner. It might not be high on invention but, over the years, you’ve heard far worse Bowie covers for sure.

Moving on, the rest of the EP is far more in keeping with The Phantoms’ own sounds. A straight and simple ‘Shakin’ All Over’ makes a great feature of Anaya’s hard and twanging lead and really sounds like the heart of an old garage band pumping, while a sassy ‘Walking The Dog’ showcases a confident vocal, steady rhythmic approach and some really pleasing lead guitar sounds. Many have wheeled out this old chestnut over the years, but the pub band charm of The Phantoms combined with that aforementioned lead work makes this an appealing addition to the hundreds of others out there. [For a superb alternative, check out Sandie Shaw’s slower, bluesy version from 1969, with superb bassline and horn accompaniment. That version might just be the best ever.]

A touch more contemporary, but still in keeping with a very early 60s bent, Dr. Feelgood’s ‘She Does It Right’ gets a fine airing where Anaya gets to indulge in some spiky rhythmic guitar work (though probably remaining more stationary than Wilko Johnson!) and drummer Ed Masi puts in his best performance, always keeping a steady beat. Penalosa, too, is on good form; the pointed delivery of the lyric really suits his gruff style, much in the same way as it had been a brilliant vehicle for Lee Brilleaux before him. Finally, the old Larry Williams chestnut ‘Slow Down’ gets dusted off and shaken up and The Phantoms tear through the familiar riff with plenty of gusto. Anaya ploughs his way through the now familiar riff and is the perfect foil for Penalosa, whose vocal performance is one of the best this time around. He approaches each line with ferocity and by the time he interjects various noises into proceedings, the power is there for all to hear. It’s funny, though, despite ticking so many of the right boxes, The Phantoms still don’t come close to equalling The Jam‘s fiery take from ’77 – there’s a lot to be said for the energies and anger of youth, especially at the pinnacle of punk’s first wave in the UK.

While most of these covers are played pretty straight – especially so in the cases of ‘Slow Down’ and ‘Shakin’ All Over’ – this is still a rather fun release. It definitely gives an insight into what really makes these musicians tick and also a good idea of how they sound live. You might feel you never need to hear any more versions of ‘Walking The Dog’, but otherwise, it’s a welcome look back at a few old favourites. What’s more, the band are giving it too you for free – grab a download via the Bandcamp widget below.