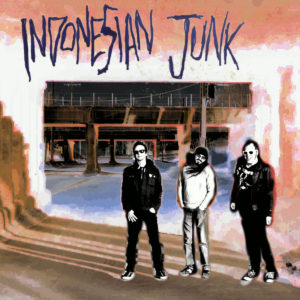 Whether conjuring memories of  ‘Surrender’ by Cheap Trick – the song from which this US band have taken their name – or Manic Street Preachers’ deliberately provocative 1991 single ‘Motown Junk’ (how many bands would dare to snipe “I laughed when Lennon got shot!” in little over a decade since the former Beatle’s assassination?), there’s something edgy and exciting about the word junk.  Whether meaning trashy or the slang for heroin, it has a certain connotation. However, Indonesian Junk really aren’t as spiky or as confrontational as their chosen moniker suggests. For this Milwaukee based trio, it’s all about the relatively lo-fi, the fuzzy guitars and a general noise rather than any actual sharp edges, either musically or lyrically.

The only time the album deliberately snipes and sets out to truly confront is on their choice of cover tune. Joining the nine original compositions, the band tackles ‘Fuck Off’, a cult classic originally recorded by Jayne County and The Electric Chairs. Very little is done to make it their own, with Indonesian Junk preferring instead to play things straight – and they come off as unimaginative in the process. The loud, swaggering bar-room blues edge of the guitar dominates. The dirty lead breaks come across with a pleasing ugliness due being loud in the mix, but the main rhythm struggles to be much more than stodgy thanks to a rudimentary drumming performance. Vocally, frontman Daniel James drawls and bleats and sounds like he’s spoiling for a car park brawl, with his arrogance making the track a perfect choice in many ways. Musically, it isn’t until nearing the end when the better side of Indonesian Junk pushes forth, thanks to a sharp change in pace and everyone hammering through some speedy garage rock worthy of New York Dolls on their better days, or a more straight up traditional performance from Brooklyn’s Greasy Hearts. For something that could have been a truly nasty powerhouse performance, it doesn’t rise much above merely okay.

With regard to the self-penned material, there are good moments, but rarely anything to set the underground rock scene alight. ‘Shake It With You’ goes forth with a swaggering bassline and sloppy guitar work set against a voice that sounds like an inebriated Fred Schneider tackling a Stooges vocal. The mix is so wobbly that James’s voice gets totally lost on the chorus; at the point he should be asserting the track’s main hook, but instead, he’s mumbling from behind his guitar. Who knows what the band were thinking at this point? They were possibly aiming for cool and aloof, but everything comes across as plain half-arsed, aside from Johnny Cyanide’s big bass sound. ‘Indonesia’ totally nails the New York Dolls homage in the guitar department with chugging bar-room riffs, but everything else is fairly terrible. The vocals try that bit too hard to be slack; the drums just about hang on to a rudimentary rhythm and the boys lumber through three minutes as if they’re in their rehearsal space and not making a supposedly professional recording for public consumption. (However, in case you were wondering, despite possessing many flaws, this is still much better than NFU.)

With the arrival of the upbeat ‘Shelly Shelly’, it’s obvious that Indonesian Junk are at their best when sweating it out at full pace. With a tighter, faster arrangement, there’s less chance of losing focus and a tough riff powers through, driving a sound that’s somewhere between Richard Hell and the Voidoids and Tommy Tutone. A simple hook allows for gang vocal shouting, the general rousing nature of the tune is the perfect foil for a sloppy guitar break. Again, it’s all reminiscent of the New York Dolls, but also with a touch of Replacements-esque cool. The vocal can still appear problematic – a singer, James really isn’t – but all things considered this is a decent garage rocker with a lot of spirit. It really should have been chosen for the album opener. Also possessing some enjoyable qualities, the full-throttle ‘You Messed Me Up’ captures the band sweating it out – mostly in tune and with some great, unfussy guitar leads. These rousing sounds represent what Indonesian Junk do best and this track might appeal to garage rock fans and punk-poppers alike, sounding as it does. Imagine The Nightmen covering Ramones’ ‘Warthog’ and you’d be in the right ball park. It’s the album’s best track hands down…but then again, there’s not much competition.

‘Out of Love’ has a hard guitar sound that harks back to the proto-punk of CBGB’s and occasional power pop tendencies, driven by a hard drum sound with some tough snare work. The bones of the track are fine – in the hands of musicians who could play in tune it could become a retro classic with it’s simple hook and rollocking guitar solo. True to form, a disgustingly bad vocal ensures this is almost unlistenable… Quite fun at first, ‘Little Malibu’ blends the garage rock elements with a surf-rock bassline (a bassline which actually sounds as if it become The Ruts’ ‘Babylon’s Burning’ at any time). With a well structured bass and some tough lead guitar work later on, this should have been one of the album’s saving graces…but what the hell’s up with those verses? The music sags with a lack of confidence; the lead vocal mumbles with a lack of tune and the backing vocals are worse – they make the tongue in cheek apathy of the back ups on The Replacements ‘I Don’t Know’ seem operatic in comparison. …And, hey, at least the ‘Mats were being belligerent on purpose. In a total change of style, ‘So Alone’ adds a touch of glam metal to the Junk repertoire. Occasionally sounding like a Gene Simmons demo from 1974, it has the benefit of a good riff, but that’s about it. The vocals repeat the same mantra – “I’m so alone, I’m so alone” throughout and if this was meant to be moody, it doesn’t quite work out; in fact it’s almost comedic! By the two minute mark, though, it all becomes tedious and eventually ends up being a waste of a good riff.

The repetitive dullness carries through ‘I’m So Bad’, another track where Indonesian Junk felt that repetition of the title would be enough to warrant an actual song. In between this, the lead guitars flair up for some sloppy fills and, all told, it’s a half-baked, half-finished idea that should have sat on the shelf. All told, two minutes and forty five seconds rarely felt so long and ‘Black Hole’, while better, fills the best part of four minutes with a casually played arrangement that adds a touch of psychy spaciness to their brand of generally haphazard garage rock. It’s okay for one listen, perhaps, but by the time it’s over and the album reaches it’s merciful end, you’ll wonder why – once again – that the upper echelons of a mid-pace all too often seem to be where Indonesian Junk seem to think they sound best.

Throwing away three of the lumbering tracks and replacing them with three variants of ‘You Messed Me Up’ could have at least made this halfway enjoyable. Being kind, this debut the kind of record that’s worth a spin out of curiosity if you’re absolutely obsessed with trashy retro rock or garage rock. Being less kind, most of it is pretty terrible for a number of reasons. After a couple of listens, it’s almost guaranteed you’ll revert back to New York Dolls’ ‘Too Much Too Soon’ or Television and subsequently forget about these guys. It might be for the best. The Rum Bar Records label has put out some great DIY records; Kurt Baker’s ‘Play It Cool‘, Watts’ ‘Black Heart of Rock ‘n’ Roll‘ and the Bullet Proof Lovers debut are all deserving of a place in any decent record collection, but as the old saying goes, they can’t all be zingers. If it takes a release such as this to make people appreciate how fabulous some of the other Rum Bar releases are, then so be it.