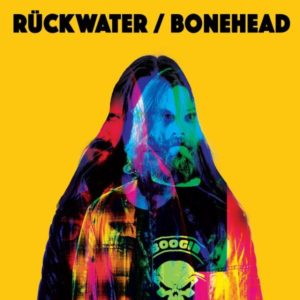 ‘Once More With Feeling’ makes a light heart of the general force behind the Rückwater sound with its chosen title, but thankfully finds the band taking their riffs very seriously. A mid paced riff comes with plenty of meat, but the band’s insistence on garage rock production values as opposed to a Sabbathy warmth sets them off in a slightly different way. It’s still great, mind – and the way that simple riff collides with a throaty, semi-shouty voice presents the very essence of these hard rocking Finns. Without the original riff ever wavering, the track motors along with some hefty boots indeed, but the song writing isn’t particularly instant. It still works well, since the contrast of the heavy chug and a few bluesy guitar leads leaves an impression. An instant stand-out, ‘No Gain’ shakes things up by introducing a spiky garage rock riff that reminds of The Hives, before a muddy, high speed and aggressive metal/punk mantle takes over. The riffs come furiously, while the raw voice forces out even more volume in a fight for dominance. Hearing this for the first time is like hearing ‘Gluey Porch Treatments’ era Melvins dragged through the mud with Turbonegro waiting in the wings. It’s heavier than the latter, naturally, but possesses all of the energies of their best works. Best heard played at ear-bleeding volumes, this track gives a great insight into what makes Rückwater really impressive.

‘Labyrinth’ often dispenses with the most raucous elements and, instead, works a slow blues groove tempered by a little psyche. Reminiscent of Butchers of Sky Valley, this atmospheric number is fine desert rock – a good showcase for both musical arrangement and voice – and the way the simple hook weaves in and out of a slow musical backdrop is inviting from the first listen…but each spin brings more enjoyment. At the midpoint, everyone switches gears and it’s here Rückwater resort to the most obvious stoner sounds. The riffs mix bits of Kyuss, Sabbath and early Queens of the Stone Age for a hefty chug, while the once almost distant voice gives way to a retro roar. You’ve heard it all before, but when done this well, there’s absolutely no reason why you shouldn’t enjoy hearing it again! Having impressed with an unexpected hook and more of a psychedelic touch, the band then set about impressing via sheer speed and guts with ‘Superfrustration’. Clocking in at just a minute and a quarter, this ought to feel like filler – or at the very best, a flippant distraction – but, somehow, it takes pride of place as one of this release’s most impressive tracks. Chopping in the hard riffing and stoner moods, it’s time for some good old supercharged punk-edged rock ‘n’ roll a la Zeke and (REO) Speedealer. A quick bottom end hum of an amp, a furious count in and the band tear forth, their musical afterburners destroying everything in their wake. The production values and grubbiness lend themselves very well to stoner metal, but the speed of this tune is what counts and the qualities of the aforementioned combined with the furious fun of a Motorhead classic results in a short and sharp track that – again and again – really hits the mark.

At this point, a couple more numbers of that ilk would be more than welcome, but never ones to settle, Rückwater revert to a heavy and trashy style; the title track takes elements previously hinted at during the opener and turns them up not to just the expected eleven, but farther still. The main riff is loud – a huge stomping beastie – and the steaming lead solos really cut through everything. The inclusion of a trash-fuelled, overly loud vocal could feel like overkill, yet somehow, it all sounds great. It’s the sound of a band letting off steam and is probably the closest we’ll get to hearing the studio based Rückwater in their natural habitat. It’s the perfect closer…or at least it would be, if only they had decided to stop there. How the sounds of actual closer ‘Flame Don’t Cast a Shadow’ came about seems something of a mystery. There are traces of the opening part of ‘Labyrinth’ at play, but there are times this could be a different band. For the first part of this nine minute epic, there’s a heavy jangle and driving bass set against a wheezy, yet almost melodic voice. The bass alone makes this worth hearing and in the power trio format, each of the players brings something to the arrangement. The retro sounds of the reverbed guitar are very cool; the aforementioned voice has a laid back attitude and the bass is consistently brilliant. This would make a good three minute track, but from then on, there’s a nagging feeling the band are playing for time in an attempt to bulk ‘Bonehead’ out to something nearing album length. The mid section presents approximately three minutes of feedback and quiet guitar noodles and in closing, there are several minutes of unexpectedly loud shoegaze and drone rock…followed by yet more feedback. It’s certainly the kind of track that would make a bigger impression in the live setting, but on record, it’s a tad laborious. [To go out on a high, a repeat play of both the title cut and ‘Superfrustration’ are advised.]

…And so, despite almost everything – good or bad – ‘Bonehead’ is neither the Fu Manchu by numbers release or the uber-heavy doom workout you could be expecting from the Scandinavians. Yes, it’s heavy in places; yes it’s got a dirty swagger and over-riding sense of weight, but their abilities to mix the more obvious with a touch of retro blues, classic hard rock and an occasionally unexpected hook makes it very different so many predictable stoner discs out there. On the basis of this third outing, they’ve still got a way to go before their mixed bag of styles results in a genuine classic, but at this stage, there’s more than enough to entertain.