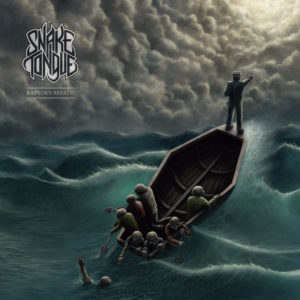 Taking the core elements of classic late 80s thrash metal, the downtuned storminess of Swedish melodic death metal and elements of technical progressive death and hardcore, Sweden’s Snake Tongue make an unholy racket on their debut LP ‘Raptor’s Breath’. The results are probably the most impressive since Vision of Disorder tore off listeners for the first time back in the mid nineties.

Their juggernaut of sounds introduces itself with an impressive complexity from the second the title cut kicks off the album, with an off-kilter time signature, a thunderous bassline, taut drumming and discordant math metal guitar leads. With three distinct elements vying for dominance, there’s so much to take in and as the riff eventually morphs into a blend of In Flames and Nile with added grinding, you know you’re headed for a terrific listen. With the vocal stepping up to the plate, there’s a slight change yet again, with the voice not really taking the expected metal approach but preferring instead more a hardcore punk bellow. The contrast between Patrik’s voice and the harsh neo-progressive bent of the rhythm is challenging at first, but once you adjust, it is abundantly clear that these guys know exactly what they’re doing. The riffs continue, thrashing, shifting into sharp tech-death sounds – never losing that edge that impressed straight off – and across a brutal three and half minutes, this quintet show a talent that’s obviously taken many years to hone into such perfect ugliness.

Dropping the shrill technical elements of the lead guitar and concentrating more on a purer form of hardcore metal, both ‘In Stone’ and ‘Post Mortem Spasms’ give drummer Fredrik a ridiculously intense workout, arms and legs going at breakneck speed, while guitarists Niklas and (other) Fredrik shred with complete abandon. The resultant noise sounds a touch like Vision of Disorder jamming with the more melodic end of Napalm Death, but the grinding bass sounds and punk ferocities of the vocal performances always ensure that there’s far more genre bending at play. The pneumatic fierceness of almost everything makes these tracks wearing, yet at the same time, it’s impossible not to be impressed by almost everything: the heaviness, the sheer tightness, the commitment to pushing everything towards the extreme, yet still holding back just enough – particularly in the vocal depot – to allow for the occasional brutal melody to cut through. In short, both tracks represent fine, fine hardcore.

Rising from the feedback at the end of the previous number and giving no time to reflect, ‘Altar’ presents some of the album’s best riffs, as a filthy guitar sound collides into a forthright bass. With Fredrik dictating the rhythm with an impressive drum performance and Patrik shouting himself hoarse, this is surely the most direct example of Snake Tongue’s brand of hardcore, with everything nearing a stylistic perfection. Although insanely heavy, the production and mix allows each of the instruments space. As only the vocal remains ambiguous and the music is first rate, even if there’s a feeling of bombardment, there’s always a perverse joy in hearing these guys in full flow. Finally slowing down – though never lightening up, not even a bit – ‘Lashes’ lays down a heavy beat over which an even heavier riff grinds and churns. The chopping chords have presence, but the swampy and grinding influences which dominate move everything farther towards doom and sludge territory. Unsurprisingly, the results are amazing, particularly on the slow and lurching chorus.

There’s a chance the band wouldn’t top the previous tracks, but the album’s second half still has more than enough to entertain. From the unexpected almost NWOBHM-ish opening guitar salvo of ‘The Horror’ it seems as if ST have a few more tricks up their collective sleeve, but the arrival of the drums, once again, moves everything into a more standard hardcore direction. As with the earlier tracks, everyone sweats it out and the results are wound tightly enough to reach breaking point before the double whammy of ‘Ghost Dance’ and ‘Death Dance’ reintroduces speed…and lots of it at that. The former is the best example of the band’s purer hardcore side, with Martin’s bass rattle presented very highly in the mix and is also as heavy as hell, while the twin guitar onslaught adds some extra bottom via a downtuned edge. Although under two minutes, ‘Death Dance’ has two distinct movements: the first forcing the band’s sound near to grindcore fierceness before ushering in a meaty doom riff to fill out the rest of the track. Although it was clear previously, the blatant melding of two moods here shows that these guys can deliver the goods pretty much every time – whatever the style. To finish, ‘The Narcissist’ adds unexpected clean guitar sounds to a sludgy metal backdrop, with Patrik forcing out each line with the intense intents of a man giving a final performance. This track stands out not so much for the great performances from all concerned but rather more for its leaning towards a mid-pace, much closer to a post-hardcore styled noise. Can they pull it off? Of course they can…and in doing so, ‘Raptor Breath’ (the album) has pretty much all of the important extreme metal bases covered aside from death metal grunts – and this album more than proves that those aren’t always necessary to create an obviously extreme listen. In fact, it’s far more impressive when a band has the talents to confront their audience without.

In and out in under half an hour, there’s no room for flabbiness, no room for excess – just riff after riff after riff, with Snake Tongue delivering a sledgehammer heaviness, dealing blow after blow. On tracks like ‘Altar’, their insistence on fusing Nile, Angerdome, Vision of Disorder, H2O and the much missed Wasted Shells results in a metallic assault that utterly destroys. Perhaps most impressive is the fact that Snake Tongue never go the easy route – their music often has more than enough of its own character to stand above the hordes of bands out there plying their trades in by-numbers hardcore and grindcore acts. For those who like it heavy, this is a veritable treat – never an album to listen to for prolonged periods, but definitely impressive nonetheless.