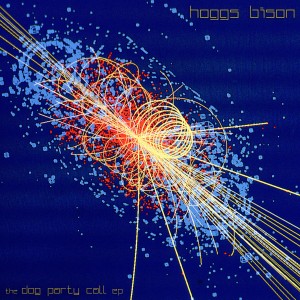 Hoggs Bison are another of those bands that could fall into post rock or art rock categories, with the creation of instrumental canvases that are often too rooted in nineties climes to be labelled straight prog (if indeed there is such a thing). At the same time, they aren’t necessarily always busy enough to warrant a definite math rock tag, even though fans of that style could certainly enjoy this release. In other words, although their music has some obvious reference points, their chosen path isn’t always easy to categorise; but it might be fair enough to say that lovers of Slint, Sonic Youth and the quieter output of the mighty Fierce and The Dead could find a musical kinship with this Bristolian trio.

To begin, a combination of jarring guitar chords and almost jazz fusion drumming should be enough to give at least a hint of what’s to come, as ‘The Wrong Right’ sets off on a journey of repetitious grooves and effusive rhythms. The main riff is unfussy and very much lends the tune a distinct melody, but it’s the rhythm section that impresses most, constantly working a warm bass line around almost clattering drums. Having set up this dialogue, Hogg’s Bison then set about repeating it for effect – a trick they’ll use again elsewhere – leading to arty, instrumental rock that’s thoughtful but never clouded by self-indulgence. Taking a musical side-step, ‘Olde Bogey’ at first sounds like a piece from a film score with a twangy approach to the guitar. The interplay between this cleaner guitar sound and another big bass grumble represents some of the best music on this EP, especially since the musicians seem happy enough to work this into a very retro sounding slab of alt-rock, where influences from Sonic Youth and Slint – particularly the latter – really take hold. While possibly the most slight of Hoggs’ compositions, those whom approached their twenties during the mid-90s are almost certain to find this droning, repetitious jam somewhat nostalgic.

Shaking things up once more, ‘Milk Milk Lemonade’ sets up a funky drum groove with plenty of hi-hat work, thus allowing the bass to adopt a busy groove. Although it might seem odd given Hoggs Bison’s penchant for all things arty, there are flourishes in the bass that occasionally recall some of Adam Clayton’s earliest work. Over this great rhythm, the guitars opt for simplistic chimes, with the same three notes recycling themselves over and over at first, then falling into some classic sounding nineties sounds, driving forth…and then back again, repeating as often as necessary. By this point, you’ll certainly have noticed that, unlike other similar bands, it’s the increased focus on repetition that pumps the heart of the Hogg, as opposed to the more traditionalist, overtly busy approach. Best of all, ‘Bob’s Secret Cache’ presents a warm and rather glorious number. The drums – livelier than before – have a pleasing and unfiltered sound, while the guitars indulge in soft, ringing harmonics, almost like Matt Stevens warming up. Linking everything, there’s a fantastic noodling bass, sometimes reminiscent of Eric Avery’s work on the trippier Jane’s Addiction material. Eventually settling into a more solid groove, the drums continue to impress without being showy and the resultant tune – for it is a tune, and a bloody good one at that – lends itself to a feeling of contentment.

While Hoggs Bison’s work can feel overtly repetitive upon first listen, it’s with subsequent plays the four tracks that make up this release start to reveal their almost slow-burning magic. ‘Bob’s Secret Cache’, in particular, shows signs that the band that could branch out and hone their already impressive skills into something far more cinematic; but as it is, there’s more than enough here to please fans of instrumental tunes with art- and post-rock leanings.