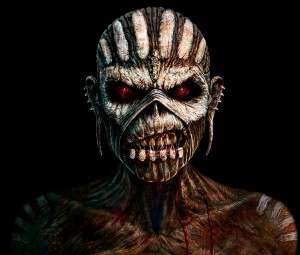 Iron Maiden are one of the world’s most enduring hard rock/classic metal bands.  Henry Rollins once claimed they have “fans in any country that has electricity”.  The band’s appeal has stretched beyond their 80s breakthough and they’ve survived shifting line ups, while tours have seen them circle the globe many, many times.

Maiden’s fans are some of the most committed, so it was unsurprising that the internet went into a mini-frenzy when it was announced that a new studio album had not only been completed and scheduled for release in September 2015, but it was also to be the band’s first two-disc studio release, and it was also to include the longest song they’ve written to date.

With the impending arrival of ‘Book of Souls’, in the first of our Iron Maiden polls, Real Gone would like to know which albums you love.  Yes, we realise it’s probably most of ’em, but at least try and play along!   Below is a poll including Iron Maiden’s first fifteen studio releases.  You have ONE vote!  If you could only keep one Maiden LP forevermore, which one would it be?