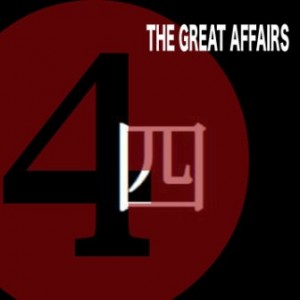 In the summer of 2011, singer-songwriter Denny Smith put his roots rock band The Great Affairs on hiatus to concentrate on his more alt-rock project, fORMER.  By the summer of 2012, just as it felt as if we may be hearing a lot more from fORMER, Smith had a change of heart – he put an end to that band (possibly forever, possibly not) and decided to resurrect the Great Affairs name.

The rebooted Great Affairs are a little different to before.  Instead of concentrating on acoustic based material (as per parts of their second album and all of their last EP), Denny has decided to blend the best elements of the prior Great Affairs sound with a few of fORMER’s rock leanings, effectively combining his musical talents into the one band.  Partly due to a renewed focus and partly due to a new rhythm section, The Great Affairs rock harder than before on a few of these songs.

Prior to the release of ‘4’, the band paved the way with a homespun video clip and a new song, ‘Sherrybaby’.  Showcasing the slightly punchier style quite effectively, the tune has more than a hint of power pop at its core, a relatively strong hook and stronger vocal pulled together via a staccato riff.  While this tune is feel-good in nature – and will possibly get you bouncing – it’s not even the best on offer among these seven songs!  It’s eclipsed by ‘Dyin’ To…’, another Smith original.  With a generally upbeat nature, ‘Dyin’ To…’ is a number which previously would have been more likely to find a place in the fORMER cannon.  Its general spikiness doesn’t stick out too much among these tunes, though, since the slower chorus sections utilise plenty of ringing guitar parts that have more in common with bands like The Connells and the criminally ignored Pound.  Overall, it could be argued that although it doesn’t bring anything particularly new to Denny Smith’s repertoire, the sound is one of a band playing to their best strengths – and it’s no less enjoyable for its tried and tested nature.  A couple of spins in, the new rhythm section start to really make an impression.  When listening yourselves, just be sure to pay attention to bassist Henry Go – although he doesn’t set out to ever upstage the arrangement, he plays a few fills that suggest he’s capable of far more than what’s asked from him during this tune…and, in fact, most of the other songs.

On ‘Rock N Roll Heart’, the rewired Great Affairs offer something not too far removed from the rockier tracks from their 2010 release ‘Ricky Took The Wheels…’ With guitars clanging, Smith quickly settles into a very organic sounding vocal melody, before a pre-chorus hints at power pop roots and the main hook drops in with a slight Tom Petty vibe.  Some of you will have heard this kind of thing from The Great Affairs previously, but even with a huge shift in band line up, they still sound as strong as before.  ‘Shame On You’ shifts things up a gear, as the middling Tom Petty influences give way to an excellent lesson in funky rhythm and blues that could be likened to early Black Crowes – although a few more seasoned listeners may spot it being a dead ringer for the overlooked 90s blues rock band Flesh & Blood.  The slightly funky edge suits The Great Affairs well, as does exploiting the contrast between Smith’s slightly raspy voice and drummer Kenny Wright’s smoother tones.  While it’s a number that has solid foundations – great guitar work, heartfelt vocals – it’s the old-school organ lurking in the back which really catches the ear.  By the time it breaks to the fore for a brief solo, it’s obvious that more of a feature should have been made of this.

‘Fists & Guitars’, as its title suggests, is a full-on rock ‘n’ roll thrasher – and it’s on this Kenny Wright penned number that the promise of the revitalised Great Affairs being a kick-ass band really delivers.  With a ragged style and a no-holds-barred rock ‘n’ roll aesthetic, The Great Affairs crank out sweaty riffs akin to early AC/DC meeting with the Led Zeppelin 1971 classic ‘Rock And Roll’, with a little Quireboys-esque bar-room trashiness chucked in for good measure.  The riffs come fast, the slightly squealy vocal attacks the listener, while lead breaks on guiatar and harmonica add to the overall raucousness.  Somehow, the band still find room for occasional acoustic guitar overdubs and another cracking bassline.  While each of these songs offers something of listening interest, this is the pick of the crop.

So, what of the acoustic side of the band?  The first of two largely acoustic songs, ‘The Ring’, is a little disappointing on the first few listens, its ambling nature sounding like a Wallflowers demo but with very little of that band’s sense of grit.  Afer a while, the guitar solo proves a standout moment with its restrained nature, as does the organ part, but in terms of long-term enjoyment – and even vocal charm – you’ll find much better elsewhere in these guys’ back-catalogue.  The wistful ‘Gone’ ends the EP with a much stronger tune.  This laid-back workout would have fit nicely among the songs on the previous Great Affairs disc, ‘Happy Ender’; its clean guitar lines and cello-esque drones provide a necessary (and very appropriate) come-down after a couple of the trashier numbers.

While in terms of mood ‘4’ feels more varied than any of The Great Affairs’ previous works, Denny Smith’s husky delivery often retains a familiar tone.  A couple of the songs aren’t perhaps as strong as the band are capable of delivering, but overall, it’s a release which long-term fans should still enjoy.