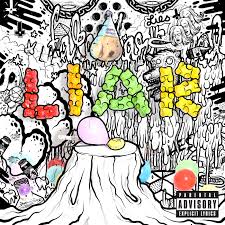 With a name that quickly conjures up feelings of novelty, of lightweight emo trash and of genuine disposability, Vancouver’s Fake Shark – Real Zombie! have, rather unwittingly, saddled themselves with a moniker that’s a quick turn-off.  The epitome of just trying that bit too hard, it combines fantasy with punctuation and comes up with utter dross as a result.  The young band may think they’re being “well random” (to use a horrible teen vernacular, popular at time of this release), but in truth, all they’ve done is give their project a name that’s going to be of potential hideous embarrassment to them in future years.  Hell, maybe they won’t give a fuck – apparently Henry Rollins is a fan, so they’ll be thrilled, whatever. [In some ways, this revelation comes as surprising, given the punk icon’s musical past; in other ways, not so much: Rollins loves music from many genres- loves Beastie Boys, funk and even takes his professional name from a legendary jazz artiste.]   Anyway…yes, Canada’s Fake Shark – Real Zombie!  What of their music itself?

Interestingly, none of the featured sounds from their third release even come near the sugar-filled itentikit punk or autotuned self pity that such oh, so wacky band names would normally entail.  One listen to this EP’s opening track ‘Paint It Gold’ opens a gateway to surprisingly big and (almost) sophisticated pop.  The electronic beats hit with a beefy bottom end; the guitars – used sparingly – punctuate the bass with notes that strangely evoke the surf boom of the early sixties in their tones, all times at odds with the psudo R&B grind that provides the backbone.  Midway, things start to feel more settled as the rhythm guitars take on a darker mantle – albeit very briefly – and FSRZ briefly toy with the kind of hipster electronica/indie rock beloved by the likes of OK Go.  If this mish-mash of styles has a saviour, it comes in the form of vocalist Kevvy Mental [again, no…just no] whose clear delivery gives this melting pot a feeling of clarity. His voice hovering between pop and lightweight transatlantic indie, perhaps hints that – among other things – at least one member of this crew is fond of Fun., successful hitmakers who seemed to spring from obscurity – giving away digital copies of an album for free one week – to cracking the chart in several countries in a near heartbeat.   Taking the big beats to extreme, the studio heavy ‘Fuck Kevvy’ mixes fake phone calls with a lax faux-rap delivery that sounds like a casual jam between Sublime and De La Soul.  Beyond that main beat, lagging yet surprisingly cocksure, there’s not much going on here…but then again, there really doesn’t need to be.

‘Soon To Be Strangers’ rocks a lot more, but the funk edged sounds – recalling the early 90s when all manner of Faith No More wannabies sprang up like weeds with big pants and a sneer – are still tempered by backdrop that’s closer to electronica, at least at first.  By the midpoint, the guitars are cranking out atonal solos somewhere behind the beat, creating a sound that feels as if Greg Ginn has just wandered in and started to crank out as many notes as he fancies.  The main hook, mostly reliant on heavy usage of the title, is this EPs best stab at trying to be less complex.  That repetition, combined with retro alt-rock melodies (plus someone in the back intermittently letting out a cry not unlike Mike Patton in his youth), makes this likely the quickest track to click for a rock-based audience.  Whether that rock audience makes it this far, well, that’s another matter entirely.

The broken beats and 80s Brooklyn sounds of ‘Afterskool Special’ blatently mimic ‘Paul’s Boutique’ era Beastie Boys, a feeling heightened by the use of brass parps pulled from a DJ loop.  These guys have the sneer and volume of the younger Yauch and Horowitz, but without the Dust Brothers sense of cool and the sheer amount of samples that made the Beasties’ much loved second album seem more sophisticated, this can seem a little crass.  Still, in terms of a tribute – which it’s clearly meant to be – it’s heart is in the right place and the repeated ‘Everything we learned, we learned after school’ provides this EP with one of its most instant hooks – even if everything around it comes with the subtlety of a hammer.  Funky and hard ‘Yes Yes No No’ mixes up the funk, rap and rock in a slicker way than ‘Soon To Be Strangers’. Replacing the white boy FNM edges with something a bit more in keeping with black funk with a touch of Prince creeping in (though again, tackled in a slightly crass manner), the band make the best out of an inane lyric – “Yes, yes, yes, no, no, no – make up your mind Kev! Make up your mind Kev!”  Attempts at throwing in a Chili Peppers groove come up more Crazy Town than George Clinton, but even so, its hard not to be sucked in by their groove, especially once a female counter vocal steps up to add an extra sense of melody.  As with a lot of the band’s material, older music fans could spend time picking out the myriad influences they’ve swallowed up and regurgitated, but that doesn’t hide the fact that these guys are clearly having fun with their sound.

Fake Shark’s carnival of sass mightn’t be as smooth or sophisticated as that of Flagfall – a geographically opposed band who use a similar set of influences on their debut EP – or as clever as ‘Ill Communication’ (a benchmark that few will ever meet) but it’s big sound and sheer confidence wins out in the end.  Throwing a bunch of things into each track to see what sticks can be a tricksome business, but like the Beastie Boys and younger Chili Peppers before them, Fake Shark – Real Zombie! have enough guile to make it work…at least most of the time.  …And any band that counts Rollins as a fan and includes Danny Lohner on their CV must be doing something right.