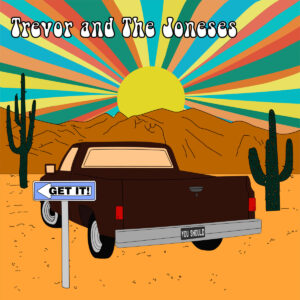 Trevor and The Joneses’ 2012 full length LP ‘There Was Lightning’ was a well-constructed celebration of retro rock. The Vegas band’s fuzzy guitar driven style pulled a bunch of great late 60s and 70s influences together and gave garage band fans a record that blended psych and rock with the best elements of The Stooges, Lou Reed and Neil Young’s Crazy Horse. What it lacked in originality it more than made up for with enthusiasm, and despite being the kind of record that took a while before it found an audience, it had a few very vocal fans. Not least of these was Chris Topham, owner of the independent UK record label Plane Groovy, who picked up the album for a vinyl release in 2014, long before vinyl sales rocketed and twelve inches of shiny black plastic became the hip medium of choice.