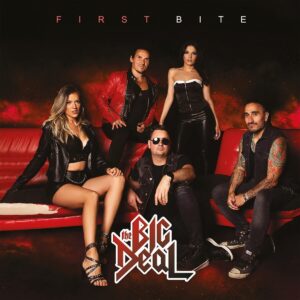 The promotional cycle for melodic rockers The Big Deal was a slow and carefully planned affair. The Serbian band pitched themselves to Frontiers Records with a selection of demo recordings which got the green light for an album, but they didn’t begin work on that immediately. Instead, they took to social media throughout 2021 and shared a set of videos that introduced them to the world via a selection of well known cover tunes. Classic tracks by Europe and Aerosmith very much set out the band’s melodic rock stall in an obvious but very engaging way, but it was their take on the ABBA classic ‘Gimme Gimme Gimme’ that really stood out. The track’s strong melodies provided vocalist Ana Nikolic with a great platform, but it was guitarist Srdjan Brankovic driving everything forward. The original cut’s distinctive keyboard hook transposed excellently to guitar, and he lent The Big Deal’s recording a truly excellent feature with his massive harmonic sounds.