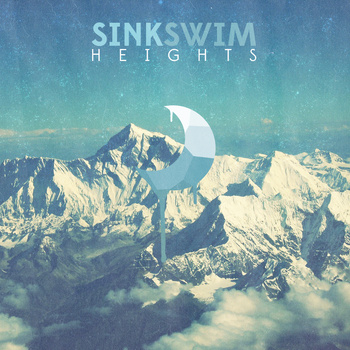 In the summer of 2012, Californian emo/alt-rock outfit Sink Swim issued their debut EP. While it didn’t really push their chosen genre’s boundaries, it featured a few really enjoyable songs. Although their follow-up release ‘Heights’ has their original sound at the centre, it does more than just pick up where they left off. With previous producer Robert “Bob” Curtin at the controls, you can be assured that – once again – it sounds great, but this time around the band have really toughened up their overall sound.

That toughness is evident right from a minute or so into opening track ‘Tides’. Following a brief intro of multi-tracked guitars, coupled with a familiar emo-ish vocal line, the band move into an already agreeable tune, but its during the post-chorus section where things really pick up: the guitars adopt a shrill shredding sound and the drums tackle brief spells of double bass pedal driven beefiness. To counterbalance this harder edge, Dane Petersen’s usual vocal style gives way for something far more metaiiic, shifting the overall mood farther towards the lightest end of metalcore. A little more accessible on early listens, ‘Move Me’ finds Sink Swim experimenting with quirky time signatures, something particularly obvious with regard to the guitar riff. Jake Lopez’s playing is busy, almost jazzy in tone, showing influences from the burgeoning math-rock scene; the rest of the band fall in line behind him, eventually settling into a pleasant alt-rock groove. The off-beat time signature re-appears on what passes as a chorus, but never becomes intrusive. As if ‘Take This To Your Grave’ era Fall Out Boy jammed with Wot Gorilla? on a Foals number, the results are both quirky and enjoyable.

Settling for something more straight ahead, ‘Perfect On Paper’ is a guitar-driven rock number which exploits the band’s influences from the louder end of the emo movement. Gang vocals lend a huge whoah, providing most of the main hook while slightly grubby sounding guitars take the weight of the melody. This isn’t as interesting as some of the EPs other material, but, perhaps, provides the strongest link with the band’s earlier work.

The other pair of tunes do not showcase anything particular different to the styles present in the previous numbers. Perhaps this EP’s weakest offering, the title cut is a weighty emo-ballad that somehow seems twice as long as it actually is, while ‘Pull Together’ – another mid-pacer, has a much better melody, lifted by some decent ringing guitar lurking in the back and a guest vocal from Love, Robot’s Alexa San Roman. Broadly speaking, both tunes are okay – and given a sense of gravitas via Bob Curtin’s production – but neither inspires quite in the way the band are capable when they really push themselves (as with ‘Tides’, for example).

Between their two releases, Sink Swim have honed their sound into a sharper, tougher, animal that hits the perfect balance between math-rock aggressiveness and alt-rock tunefulness. Although it tails of a little towards the end, there’s more than enough to recommend this EP to fans of math-rock and the lighter end of alt-rock. …And to those already familiar with Sink Swim: if you liked ‘Elements’, chances are you will love ‘Heights’.