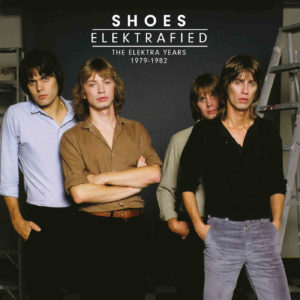 To a legion of power pop fans, Shoes are legendary. To a lot of other people – and especially those in the UK – they remain a largely unknown entity. While some fans will claim that 1977’s ‘Black Vinyl Shoes’ is the Shoes masterpiece, it merely shows a band on the rise. It’s a record with some good songs, a lot of enthusiasm and a certain amount of DIY charm – and it’s likely that DIY “cool factor” that makes it so highly prized by those vocal champions. In terms of consistency, it’s somewhat hit and miss. If you’re looking to discover a band at their peak, look no further than the three Shoes albums recorded for Elektra Records between 1979 and 1982.

This 4CD compilation presents each of those albums in full, alongside a massive vault of bonus tracks – fifty four in all – making ‘Elektrafied’ the ultimate Shoes package for the uninitiated.

END_OF_DOCUMENT_TOKEN_TO_BE_REPLACED 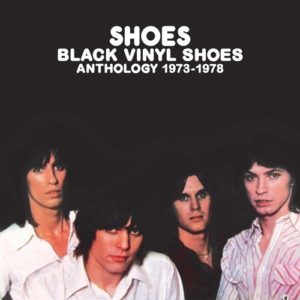 The American power pop scene from the mid-70s to the early 80s provided a goldmine of great music. Over the years various compilations have provided a great insight into the burgeoning scene’s classics, self-released gems and genuine obscurities. Delving far deeper than Cheap Trick and the Raspberries, recordings by The Flashcubes, Fotomaker and Earth Quake have become much loved favourites for music fans looking for the melodic charms of Badfinger, but also for the flair and sparkle of the soon-to-be in vogue new wave scene. …And then there were Shoes. In a land where band names didn’t need to be easy to find with search engines Shoes were potential kings, but so much of their early work proved elusive to find. For the many power pop geeks who’ve fallen in love with a couple of their later records – 1979’s ‘Present Tense’ and 1981’s ‘Tongue Twister’, specifically – this finely put together 3CD anthology throws a lot of light upon music that led the band to that career pinnacle.