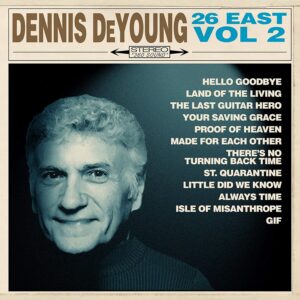 When Dennis DeYoung decided to retire, he hit upon the idea of one final, grand release that would recount his fifty years in the business with an autobiographical slant. Since Dennis rarely thought on a small scale and had always been blessed with a very theatrical voice, the idea of him taking his last curtain call with something resembling a musical about his life didn’t seem that silly. In fact, a big idea got even bigger with Jim Peterik’s help, and the planned final album had to be split into two volumes.