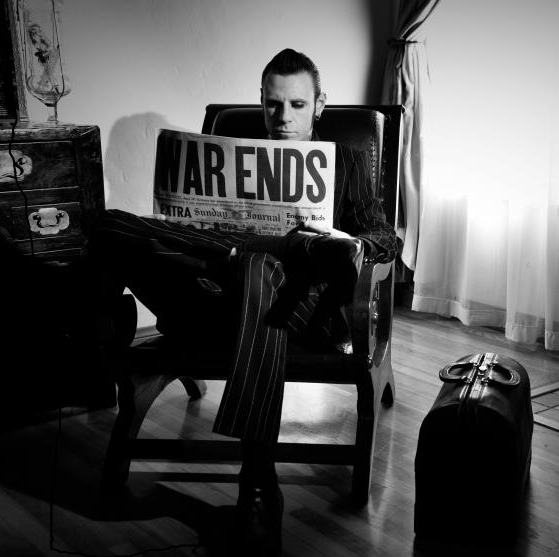 You may not think you know Christian Martucci, but the Pennsylvanian multi-instrumentalist has worked with some very well known faces.  Aside from working with Dee Dee Ramone, Martucci’s credits also include work with Slipknot/Stone Sour frontman Corey Taylor and a stint with Black President – an all star punk band which has included (at one time or another) Goldfinger’s Charlie Paulson, Bad Religion’s Greg Hetson and Lagwagon’s Dave Raun.

Since “Riding The Blinds” refers to hitching a ride without knowing the destination, it’s a fitting title for this EP – the first outing under his own name – since it opens a new musical chapter in his career; one which explores a different musical route. These four songs – pulling in at just over ten minutes – each shows off some great rock riffing, blending hard rock, glam-ish metal and a touch of punk (in attitude, more than actual sound), all well played and with a huge sense of urgency.  Martucci’s shouty vocal takes a while to really tune into, but it’s very much in keeping with the full-on approach dictated by the songs.

Charging ahead with a direct guitar riff, ‘I Don’t Mind The Faith’ has the most instant of the four cuts, combining a shouty chorus with a forceful growling vocal and some spot on rock ‘n’ roll soloing.  At scarcely two minutes, there is absolutely no padding…and it’s all the better for it.  It is instant, yes, but it doesn’t necessarily make it the strongest offering.  ‘Burial Song’s intro shows a larger degree of sophistication thanks to a dual guitar melody in the intro, while the rhythm second of session drummer Zak St. John  and bassist Carl Raether (of Joey Cape’s Bad Loud) get to tackle a tune with a touch more complexity.  After a few spins, ‘Burial Song’s (slightly) more intricate elements make it the pick of the bunch.

The other two numbers don’t always present any great musical shift, but both have their merits. ‘Snake Oil’s staccato riffing packs a punch, while a particularly carefree solo adds to the general trashiness.  Although maybe Martucci maybe ought to reign his voice in a little, the energy on show is palpable, which alone is just enough for Martucci and his cohorts to carry it off with ease.  With an uncompromising mix of metallic chugging and punky attack, the title cut is like a fist in the face, as Martucci tackles a heavy tune that could be described as sounding like New York Dolls re-imagined by Prong’s Tommy Victor.  The band adopt a similar tight but loose feel as per ‘Faith’, except any rock ‘n’ roll soloing takes a back seat for hard rock posturing, the kind which could have filled many LA hard rock tracks from just the late 80s.  Here, Martucci’s playing style combines flair and anger with great end results.

Short and sharp, ‘Riding The Blinds’ isn’t really an essential listen, but nevertheless, it  comes recommended if you like Duff McKagan’s Loaded, Buckcherry or similar high energy, trashy rock.  If you can tune into Martucci’s gravelly vocal style, you’ll like it even better…

The whole EP is available for free download via the Soundcloud link below.

Occasionally something completely unexpected appears in the Real Gone review pile.  This debut EP by Brooklyn performer (The) Underground Man is such a release.  It appeared with little information attached and even a visit to the official website drew a near blank – just a splash page featuring a hat-adorning silhouette, plus Bandcamp stream to the EP.

So, what is it about? Just who is the Underground Man?  What does he want?

The EP is comprised of five acoustic-based songs, played a twangy, late ’50s style, replete with underplayed harmonies.  There’s something about this release that sounds like it could’ve had roots in a side project from The Magnetic Fields’ Stephin Merritt.  Maybe it’s the cheeky New York edge; maybe it’s the blatant disregard for popular musical whims and fashions. It’s in the attitude as opposed to the end result: it’s not the work of Merritt of course (to begin with, this performer lacks Merritt’s rich baritone) but, just maybe, the amiable retro qualities present here may appeal to his devoted fan base.  Then again, they can be a demanding bunch, so maybe not.

The songs themselves are enjoyable in an old-fashioned (or rather post-modern take on old-fashioned) way, with the harmony-driven ‘Goodbye Look’ being the pick of the bunch.  The one-two shuffle and simple vocal suggest a love for the iconic Buddy Holly, while the recording really highlights the hard sound of guitar strings.  Just as charming, ‘It’s Not True’ mines a similar musical past as the best works of She & Him. In fact, after a couple of spins, it’s near impossible not to imagine Zooey Deschanel singing alongside whoever this unnamed man may be.

The remaining three cuts are enjoyable and represent more retro fun – suitable for either late night listening or wandering the streets with your portable device.  ‘Hey Love’ is upbeat, almost early Beatles in its execution, with some pleasing live-in-the-studio elements and ‘Trouble Follows Me’ wins through with a busy guitar break and lackadaisical mood, despite not being as strong overall.  Interestingly, the slow title cut – and lead track – is perhaps the weakest, never really tapping into Underground Man’s full potential.  After a wobbly start it never quite recovers, but doesn’t lessen the impact of the release too much.

Hear this mystery man’s take on fifties pop and pop-culture for yourselves: the EP is available as a free download via the Bandcamp widget below.

To celebrate the work of lots of independent and DIY bands appearing at Real Gone, it’s time to end the year with something special.

With the co-operation of sixteen different artists, we are able to bring you “Let It Roll…”, the first ever Real Gone sampler. The name comes from a Dead Exs line, and it was good enough a title for George Harrison too, so…
[It was almost called “Now That’s What I Call Don’t Say We Don’t Ever Give You Nuffin’“, but in lots of ways, the name is unimportant].

Here’s hoping you find something to enjoy. If you do, please get in touch with the musicians to tell them and make sure you check out their full releases! If you’ve downloaded it, please link back to this page on twitter and facebook – help make this a major exercise in spreading the word…

All tracks were used legally with the help of the respective artists.

This download has now been removed from our server.  Should you still wish to download it, please email us via the contact section on this website and we’ll send you a zip file of the contents.

Real Gone would like to extend their thanks to everyone who took part. You can find various links back to the band’s products and websites scattered around this website, as well as reviews for everyone. There are a couple of notable absences due to missed deadlines or Ts&Cs… Here’s hoping they can be a part of it all at the end of 2012.

Formed in 2009, the Dublin quintet The Fallen Drakes may not break any new musical ground with ‘Death Of An Actress’, but thanks to an easily accessibly sound combined with top notch production from U2 and Kasabian producer Ger McDonnell, their EP is still a strong debut. Musically, it finds a space at the soft end of stadium rock, lighter than U2, but with a quality that’s often reminiscent of Coldplay and Snow Patrol.

During the opening number, ‘Masquerade’, Brian McGovern’s vocals are solid, but the best moments are provided by Michal Bartolen’s lead guitar work, which utilises a ringing tone and a delay. Things toughen up slightly near the song’s close, but without losing any of the commercial impact. ‘Don’t Cry’ is noticeably weaker at first, but the upfront guitar sound gives the number a great momentum; Hyder Ali’s bass work is punchy throughout, providing a great counterpart to Nabil Ali’s drumming which, as with the previous number, relies a great deal on hi-hat and sharp snare work. After a few plays, ‘Don’t Cry’ sounds equally as strong; a number which presents The Fallen Drakes in good form, with top performances from all concerned.

‘Lights On’ presents The Fallen Drakes at their punchiest. The guitars take on a more angular approach, before bouncy, bass dominated verses become reminiscent of The Kaiser Cheifs and Frankie & The Heartstrings. The musical performances are okay – Hyder Ali turns in a couple of simple but effective bass runs – but a chorus which relies far too much on one line shows the song writing here is in need of sharpening. ‘Love Again’ takes a similar approach to alternative rock/pop demonstrated during ‘Don’t Cry’, but ups the stakes, giving The Fallen Drakes a tougher sound. Michel Bartolen’s lead guitar work maintains a strong presence, while Nabil Ali drumming leans farther in a rock direction, favouring a pounding approach with fewer quirks and intricacies.

Despite their very generic approach, The Fallen Drakes brand of jangly, guitar-based rock/pop is very professional and often enjoyable. You can stream the EP from the widget below or download it for FREE here!

There’s a special giveaway at REAL GONE to celebrate this Easter weekend. To say thank you to all our regular supporters over the past year or so, we’re offering a few unreleased power pop gems.

First up is a demo from Mark Bacino; a track recorded during the ‘Million Dollar Milkshake’ sessions. Mark has three superb albums out at the time of writing, but any new bits are always welcomed! Download ‘So Does Mary (demo)’ here.

Edward O’Connell has kindly offered a stripped back, alternate version of ‘I Heard It Go’, a track featured in its original form on his excellent ‘Our Little Secret’. Grab it here!

Finally, Mick Terry has given us three demos to share. Each of these tracks can be heard in their finished versions on his debut disc ‘The Grown Ups’, which is well worth checking out.
‘Hoxton Song (boggia)’ ‘The Usher’s Tale (2009 demo)’ ‘Ringing Like a Bell (demo edit)’

REAL GONE would like to say a big thank you to Mark, Edward and Mick for giving these tracks so they can be shared with you all. If you like these songs, please take the time to visit each of the musicians at their respective websites (links below) to say hello – and maybe consider buying their albums if you haven’t already.

What do you mean “but I don’t like power pop”?!

Okay then. Here’s something for the rest of you.
Here’s the legendary Tom Jones, celebrating the resurrection of Jesus through the medium of dance: