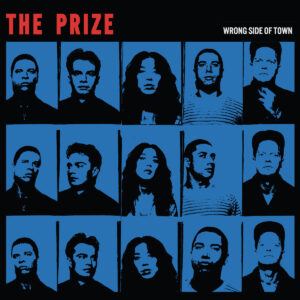 Formed during the pandemic restrictions of 2021, The Prize are promoted as a power pop band, but those looking for a world of Jellyfish and McCartney inspired throwbacks should be forewarned that this band really don’t indulge in that kind of perfection or sugariness. There is a power pop heart to their sound, but it’s far more indebted to bands like The Nerves (of ‘Hanging On The Telephone’ fame) and The Real Kids, occasionally fused with the more melodic end of The Buzzcocks’ output. With a pinch of early Flamin’ Groovies and the occasional nod to fellow Aussies The Saints to be discovered along the way, this debut EP stirs up a world of energy, but matches the spiky riffs with massive, catchy hooks at every turn.

The title track kicks things off in style with a riff that sounds like a muted pop punk affair, but the arrival of a great vocal shows off The Prize’s true intent, when guitarist Cary Parker and drummer Nadine Miller harmonise in a way that calls back to a lot of late 70s US power pop cuts. The blend of energy and harmony is absolutely terrific; the fact that they somehow manage to find space within the semi-spiky arrangement for a Thin Lizzy inspired guitar part makes it even better. A couple of plays is enough to mark this out as a classic track, with its repetitious hook, enthused vocals and tight arrangement. The fact that a chiefly American sound now comes with a very welcome Aussie twist via an accented vocal is also very welcome, marking out The Prize as being a little different from the expected norm. On the surface, ‘No Way Back’ presents more of the same, only this time, The Prize summon a few more of those hard 60s rhythm guitars inspired by Flamin’ Groovies. It’s an inspired move since the blend of melodic punk, garage rock and tough power pop is perfect from the outset, and with a chorus dropping in a couple of shameless rock ‘n’ roll stops in a tightly wound drum part, it further shows a band who are in complete unity – a band who have a very clear idea of their sound and identity, even at this early stage in their musical journey.

A cover of The Incredible Kidda Band’s ‘Fighting My Way Back’ could easily pass as a Prize original with its hard, punchy rhythm, but there’s a little more of a pub rock feel to a couple of the riffs, and a broader vocal doesn’t offer as many opportunities for great harmonies. By applying a brattish vocal and a hard twanged lead guitar, Cary dominates the recording, but a close ear shows that – much as before – the rhythm section sound especially good when locked into their semi-punky groove. It isn’t as immediate as this release’s original tracks, but if it shines a light on one of the new wave era’s lesser known bands, then this cover has been more than worthwhile. Having set some great sounds in place, the band opt for all out Ramones homage on the closing number ‘Don’t Know You’, when mixing a great pop punk riff with handclaps in a way that would please Dan Vapid and the brilliant Sweatpants Party. By driving one of their best riffs as hard as possible, it showcases their most full on approach, but there’s a bubblegum coolness here too, as evidenced via a world of vocal woos and a sneering melody that actually celebrates the more accessible elements of the Ramonescore movement. In and out in under two minutes, it’s a fun blast of melodic punk that fans of the style will love – originality be damned!

Set to cause a sensation throughout Australia and beyond, this EP is a ten minute ray of sunshine; a short collection of tunes that – if need be – will totally restore your faith in all things retro. As the first fruits of a band thrown together in less than ideal circumstances, it’s almost perfect. It’s time to dust off that skinny tie and shine those shoes: The Prize want you to dance like it’s 1979, and a good time is guaranteed.