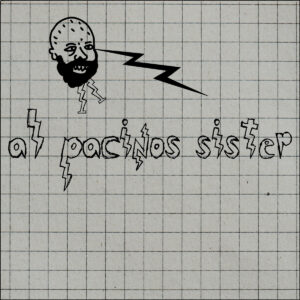 British punk band Al Pacinos Sister formed during the pandemic lockdown in 2021, but it wouldn’t be until the following year that they really exploded into life. Their ‘Trained In Karate’ and ‘DOGZ’ EPs (released in February and July of that year) marked their place as one of the UK’s noisiest underground bands. It almost immediately placed them alongside Pizzatramp and Socks On label mates Get The Fuck Out of Dodge – a role that the somewhat faceless act seemed to be taking very seriously.

This third release for ’22 brings yet more intensity, but this time around they’ve been unafraid to experiment, dropping in some really noisy indie riffs and various post punk moods into their world of anger. This sometimes different approach isn’t any less intense; if anything, the slightly more spacious sound displayed during ‘Alibi’ shows off a much sharper band. The bass punches through the whole track with an aggression but also a warmth, which is hugely important since it offsets a spiky lead guitar that often sounds as if it’s been inspired by parts of Wire’s ‘Pink Flag’ LP. Between the riffs, a familiar shouty vocal latches onto a simple refrain, and although the lyrics aren’t immediately clear, the way the voice is used to create a buoyant counter melody is very effective. In a place where classic hardcore and speed driven post punk meet, this immediately sounds very cool, but actually improves when the chorus hits, since a chopping guitar throws out a world of muted chords and a call and response vocal begins to sound like a much punkier version of Das Kapitans. In approximately one minute, Al Pacinos Sister more than have their listeners’ mass attentions.

‘Alfonso Davies’ opens with a superb drum part that’s really heavy on the toms, which is used to power through a verse that goes deeper into a post punk sound than any of the band’s previous recordings. The hard rhythm underscores a spoken vocal, which creates a great atmosphere before the chorus explodes into the expected overdriven riffs and shouting, which should please extant fans.The artier slant is further explored during a relatively lengthy instrumental break where pointed guitar notes punctuate a very heavy rhythm. Unexpectedly, the band sound like a twisted cousin to Franz Ferdinand before returning to the original drum groove for a big finish and another round of the original shouty refrain. In showing how far the band have come, musically speaking, in a relatively short time, this is the EP’s standout cut. It might seem a little lightweight to those looking for more of the straight hardcore of yore, but those people will still be treated to a pure hardcore banger when ‘Alophant’ hits its stride.

The third and final tune, ‘Alophant’ sounds more like a leftover from the ‘DOGZ’ recording, since APS very much revert to their earlier hardcore sound, but even here, there’s still a sense of the band pushing forward. The track – coupled with a video featuring found footage of dancing pensioners – encapsulates everything about the band’s brand of noise, and the sheer intensity they’ve harboured since their first recordings. The track opens with a huge blast of thrash/punk, very much drawing from the fury of early Minor Threat crossed with the sharpness of Discharge. This places a huge focus upon the riffs in hand, and especially so, since the speed makes a repetitious vocal almost inaudible. When things finally quieten for what passes as a chorus, vocal throws out a sneering quasi-melody, under which the thrashing drums and guitars still retain their full on intensity, before the whole process repeats a second time. In and out in a little over fifty seconds, it’s a great example of pacey, but minimalist hardcore at its best.

Three songs, two minutes and fifty two seconds, then out: this may well be more complex, musically, but APS still value speed above almost everything. Behind the poorly curated artwork, though, you’ll find some absolutely terrific riffs and a commitment to angular noise that absolutely nails its musical aims in a way that’s more complex than before. When it comes to DIY punk, these guys bring a whole new intensity to the table, proving that even the sometimes predictable can still be very exciting.