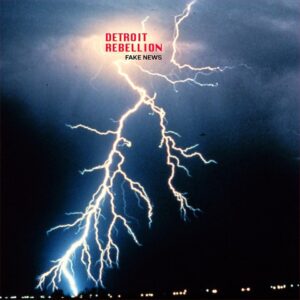 Back in 2013, Detroit Rebellion self-released their ‘Detroit Rebellion ’67’ EP, a four track blast of noisy garage blues delivered by two men who often valued pure grit over musical finesse. Continuing in the vein of the now missed Dead Exs and the perfect successor to their ‘Fork In The Road’ release, it showed how the rawness of a pure garage blues sound could often be relied upon to hit the spot, despite working to a fairly formulaic approach.

Some of the best tracks from those EPs were recycled for 2017’s full length release ‘The Man’, and when heard as part of a broader musical canvas, they lost none of their power. The duo continued to plough forward with 2018’s ‘See You Next Year’, channelling Morphine – sans saxophones – on ‘Snake Eyes’, conveying a really spooky edge on ‘Spit Fire’, and working their usual rowdy voodoo on ‘Wrong Number’, all of which suggested that, going forward, there would be even more mileage in their gritty sound.

On the other side of a few troubled years – including a global pandemic and a presidency that ended in a riot – vocalist/guitarist Jeff Toste and new drummer Micaiah Castro are in a furious mood on bits of their 2022 LP ‘Fake News’. A fourteen track affair blasting through topics including – but not limited to – feeling insular through an enforced entrapment, gaslighting, propaganda and speaking ill of others, it’s often a very cynical record, but is never impenetrable or wantonly difficult. There’s actually plenty here for old fans to love, and for new ears to enjoy.

‘2020’ kicks everything off with a hefty blues number where distorted guitar reigns. With Toste’s chunky style underscored by a rattling rhythm, the music works a natural groove, and despite only being the work of two men, it never sounds sparse. There’s plenty of reverb on the guitar to fill space, and a great echo attached to the vox for extra atmosphere. By the time the number gains momentum and that vocal increases in pace, there’s an energy that really works, and going into the lead guitar break, all of the fury present in the band’s earliest recordings comes rushing to the surface. It’s a strong start, but there’s better music to be heard along the way, with a Morphine-esque influence quickly serving a rollocking groove throughout ‘The Law of Attraction’ where a detuned guitar collides with a crashy drum part. This, obviously, is classic Rebellion redressed in more confident finery; a track where it’s very clear that everything was recorded “as live”, there’s plenty of distortion – though never for the sake of it – and just enough moments where the recording remains clear enough for a clean toned vocal not to sound lost in the noise. A couple of listens is enough for its repetitious riff to stick, and even with an unexpectedly sudden end, it plays like a brilliant self-contained piece.

At the album’s most threatening, ‘Doom and Gloom’ mixes a jangling guitar rhythm with a production sound that accentuates the duo’s rougher edges. Throughout quieter verses, Toste sneers against the guitar, before the riff explodes into a distorted, fuzzy noise that’s almost as much about stoner rock as pure blues. For those who came for purer garage blues, of course, there’s plenty to enjoy here too, via moments where an aggressively approached slide guitar lends an angry melody beneath a vocal howl, and a drum part supplies a very raw groove that occasionally takes inspiration from some great late 60s garage records. The slightly jazzy ‘Hedge Your Bets’ at first sounds like it could be ‘Fever’ reappropriated for a sweaty garage dwelling duo with its sassy rhythm, but with the accent firmly on distorted guitars chucking out garage blues refrains for an instrumental hook, it soon becomes a natural fit with the Rebellion’s canon. With Jeff hammering through several howling riffs and Castro laying into a solid groove it quickly finds a place among the album’s best numbers, before ‘They Ate All Your Pie’ contrasts pure noise with a ticking sound, a sneering vocal and a real feeling of tension. The way this track shifts between the spacious verse where the hi-hats dominate over everything else and a filthy sounding instrumental element where the ghosts of The Cramps loom large creates something genuinely exciting, but without ever sounding like it needs to be different or quirky. A perfect snapshot of the duo’s raw noise, it’s one of the album’s real highlights.

In a change of mood, ‘Yellow Teeth’ sets up a groove where a simple drum part sets a rhythm in place, and Toste throws out clean notes as if using his guitar in a siren-like way. It isn’t long before a more tried and tested blues based noise fills the chorus, though, and despite the duo being in more of a comfort zone, there’s still plenty of enjoyment to be had when experiencing several chords subjected to distortion and a crashy drum part. The track eventually peaks when even noisier chords are punctuated by rhythmic stops – something that sounds like it’ll work brilliantly live – very much showing a tight musical bond between the two men, despite Castro being a recent-ish arrival at the time of recording. Opting for something more melodic, the title cut uses muted guitar notes to emulate an upright bass before exploding into a blues drenched riff that isn’t far removed from some of the band’s earlier output. At the point where you suspect you know where things are headed, the melody speeds up before descending into a weird loop, where jazz influenced riffs whip up a circular groove and a spoken vocal adds some extra tension. With a noisy garage rock jam used effectively for a chaotic coda, pushing the drums further into the spotlight, it’s easy to hear why this was chosen as the album’s flagship track.

Almost everything here is good to great, but ‘Let’s Ride’ is an instant stand out. Taking a melodic slide guitar blues and adding a pleasing drum shuffle beneath, it’s easy to hear traces of Morphine once more, but also faint echoes of early Dead Exs, before a quieter vocal taps into a slightly more mature sound. If it weren’t clear enough before, the cleaner and more spacious approach highlights how tight the duo are when working a very natural groove, and the vocal – although never angry – conveys a pleasing cynicism that gives the number a welcome darkness. Elsewhere, ‘Turnover’ taps out a blues groove that sounds more like a two-step than a typical garage blues/garage punk noisefest, but despite a musical shift, actually includes one of Toste’s best lead breaks; ‘Just Passing Through’ finds time for a bluesy jam that sounds as if a few of the guitar parts have absorbed a cool rockabilly influence, and ‘Clap of Thunder’ rattles like a blues fuelled freight train, all bass drum stomp and roughly approached guitar strings hidden under distortion. On any given listen, each one has the power to thrill without taking the Detroit Rebellion sound wildly off piste, further suggesting that, when played this well, garage blues just never gets old.

Although no more commercial, there’s a heart to this album and a variety within the Detroit Rebellion’s simplistic set up that ensures the material never drags or becomes too samey. With a few genuine bangers to be heard on a filler free disc, despite never aiming to be a good time record in the traditional sense, it could easily be their career best. Fans of the style should check it out at the earliest opportunity.