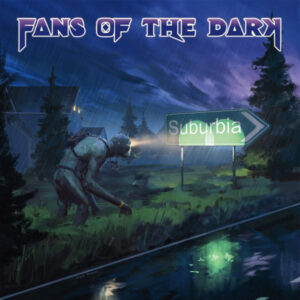 The debut release from Swedish melodic metal band Fans of The Dark was a genuine mixed bag. Conceptually, it tried to hard to link horror narratives with metal-based tunes, but some of the vocals were terrible, and the least said about the artwork, the better. Some of the material was distinctly average and yet, despite almost everything, it had something that showed promise. For those willing to persevere and make it past those heavily accented, really dated vocals, the seemingly ropey album actually hid three very strong tunes which combined chopping guitar lines, some muscular bass and a couple of big choruses. It suggested that – despite almost everything – Fans of The Dark might just be harbouring some talent. They just hid it very well.

The band’s second album, ‘Suburbia’ continues with similar themes, bringing a world of trashy VHS horror and fantasy into a small town neighbourhood, via a very 80s soundscape. Once again, some of the lyrics are clichéd beyond belief, but a lot of the vocals are a marked improvement, and through sheer determination – or maybe just pure luck – the album features another handful of great tracks that capture the melodic metal spirit of years gone by. Much like the debut, it’s a case of cherry picking the good bits, but those songs are much stronger than anything on the first record.

Paying tribute to George A. Romero, ‘Night of The Living Dead’ starts with best foot forward when presenting the famous “We’re coming to get you, Barbara!” sample and a Dio-esque riff, before dropping into a landscape of unexpected AOR. When hitting the chorus, Fans of The Dark eschew most of their previous metal traits in favour of Survivor inspired stabbing keys and the kind of harmony vocals you might find on a Lionville album. It’s hugely unexpected for a band who previously championed a hefty leather trouser and loud vocal approach, and even when everything is beefed up for a shredding guitar solo, there’s always an ear on melody. By the time the band wheels out a surprisingly good chorus one last time, ‘Night of The Living Dead’ proves to be really catchy, and although Alex’s vocals are still somewhat limited, by pulling back and not attempting to hit any big notes, he sounds a thousand times better than before. ‘The Pirates of Maine’ continues the melodic streak by opening with a harmonious guitar sound throwing out some distinctly 80s riffs, before dropping into something that sounds like ‘Holy Diver’, but played without the conviction. The song’s narrative veers constantly between bombastic and silly, eventually peaking with the kind of fist-pumping hook that’s made of pure cheese. Although the guitar parts are very pleasing, often sounding like a cross between Judas Priest circa 1986 and classic Icon, and the featured solo is great, as a song, it’s a little lumbering. At over seven minutes, it certainly outstays its welcome; it achieves its goals after four of those – several minutes of riffs pilfered from late 80s Iron Maiden and a piratey refrain are a little tedious, but everything leading up to that unnecessary coda is great, and further suggests that Fans of The Dark have really matured over the preceding year.

‘Fantasia’ is far more of a throwback to the debut with its high octane, 80s metal approach, where elements of Dokken collide with something more European. Alex reverts to over-singing and reaches for a few big notes that are beyond him, but another decent chorus where harmony vocals and a nod to melodic metal fare like Heaven’s Edge saves face. A great guitar solo adds more charm, but this is certainly aimed far more at genre fans with its sweaty, leather bound edges. Nevertheless, it captures an energy and some great playing which suggests the work of a potentially strong unit. Unfortunately, ‘Sick! Sick! Sick!’ sounds far too much like earlier Fans of The Dark works with hastily thrown out chopping riffs set against a bad vocal, and clichéd lyrics, before descending into an uninspiring plod that sounds like Iron Maiden’s ‘Flight of Icarus’ tackled at half speed. Those paying close attention will discover a deftly played twin lead, but that isn’t enough to make an iffy arrangement truly work, before ‘Fright Night’ continues this wobbly trend for horror themed metal via a thundering riff and punchy bass – played well in a decades out of time way – whilst Alex wails with abandon. Lovers of the style might just glean a little cheeky excitement from a riff that sounds like ‘Under Lock & Key’ era Dokken throwing themselves head first into a dated performance, but any genuine enjoyment is likely to be quashed by an overwrought vocal that errs on the side of silly. When Fans of The Dark get into such a mood, it’s sometimes hard to see the line between genuine homage and loving parody, and that just leaves a slab of metal in its wake that never rises beyond being okay. It’s the sort of track you mightn’t mind when listening passively on a well-curated playlist, but going to the effort of placing a disc in a CD player to listen rather more objectively – in the old school way that Fans of The Dark are probably expecting – to listen is a different matter entirely.

On ‘The Goblin King’ – an obvious tribute to David Bowie in ‘Labyrinth’ – Fans of The Dark serve up the purest cheese with an iffy vocal, as per the debut. It opens with a pleasingly melodic riff that works a descending melody against a surprising rock ‘n’ roll base, but beyond that, it has very little in its favour. The aforementioned vocal reaches for something a little moodier and sounds terrible when presented with a weird echo. It sounds as if it were pasted in from an inferior demo, and lyrics about the Goblin King who “can do anything” may well be inspired by the much-loved Henson classic, but when bellowed over a sub power metal riff, they just make Fans of The Dark sound really embarrassing. The only saviour during these four minutes comes via a great lead guitar break, but even then, it’s nothing original. Everything about the style, pacing and tone suggests someone has been listening to Iron Maiden’s ‘Powerslave’ album – a lot. …And one listen to this will be enough for you to wonder why you aren’t doing that instead.

The band’s title song is a reasonable plod through a world of hard rock that sounds as if it were appropriated from Kane Roberts circa 1990. It’s a little stodgy and lacking the new found flair as heard on a couple of the earlier tracks, but a decent stab at another AOR chorus brings it up to speed before a melodic chug leads into a great solo where a slightly dirtier sound works well against the very familiar melodic rock backdrop. It’ll never be any more than a reasonable distraction, but it’s still better than most of the debut’s songs. Closing with the epic eight minute ‘Restless Soul’ is a brave move. As shown earlier during ‘The Pirates of Maine’, this is a band that doesn’t necessarily come into their own on the longer form tracks, but this actually has a couple of genuine highlights. The opening riff conveys a bluesier tone that’s immediately more emotive than most of Fans’ work to date, and a jaunt through thunderous 80s metal territory where a love of early Iron Maiden comes to the boil once more – via both a galloping bassline and yet more twin leads borrowed from 1985 – captures a real old fashioned energy. Unfortunately, like some of the pompy and theatrical elements that can be found en route, some great music is dragged down by a vocalist whom really doesn’t suit the job in hand.

Overall, ‘Suburbia’ is patchy. It’s better than the debut thanks to a more wholehearted effort in the chorus writing department (‘Night of The Living Dead’ and ‘Fantasia’ are more than worth checking out), and some smart guitar work that presents itself intermittently sometimes helps even the worst of the material to have an occasional spark. The fact is, though, for all of their enthusiasm, Fans of The Dark all too often sound like a band overreaching themselves. They have talent – when the material works, that’s obvious – but too much of a desire to think big and steer everything in a fantasy direction for their chosen concept just leads to them coming up short. Even with many flaws this is a far better record than Fans of The Dark had previously suggested they were capable of making and Alex’s voice is a marked improvement throughout, but in an age where so much new music is available at the push of a button, unfortunately, that just doesn’t feel like enough.