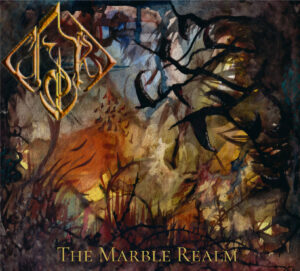 Four years on from their ‘Nemea’ album, UK progressive sludge merchants Fissure of Riddles make a particularly intensive noise on their 2022 release ‘The Marble Realm’. Four of its six songs take a very long time to sometimes do very little, but for fans of such a slow and oppressive style, that moody and methodical approach to a riff results in the kind of album that’s almost guaranteed to make an impression.

In terms of obvious melody, the opening pairing of ‘Loathe & Behold’ and ‘Flakey District’ very much kicks the album off in a position of strength. ‘Loathe’, in particular, captures the band in a restrained mood. Clean guitars cast forth a ringing tone, and sparse chords set up a feeling of unease. It immediately calls to mind more of a 90s Paradise Lost vibe than the melodic/progressive death sound that the band have flaunted in the past, but its certainly none the worse for that, especially once frontman Matt Wyslocky finds a vocal space that mixes a Type O Negative meter with a Fear Factory-esque haze. By introducing the heaviest chord in the universe midway, it eventually jolts the listener and reminds them that Fissure’s intense core is still there. As a stand alone piece, its fine, but it works far better when viewed as an extended intro for ‘Flakey District’, a number which wastes no time in bringing many of the much darker moods that fans will be expecting. The opening of the track fuses more cold guitar work with the heartbeat of Black Sabbath’s ‘Iron Man’, allowing the band to slowly unwind. Mark Taylor’s sheet of guitars retains an impressive, epic sound, but those paying closer attention will love the deep grind supplied by Dan Chillingor’s unshakable bass. Cranking things up a gear, the number settles into a sludgy, grimy slab of doom, but the traditional elements of those heavy subgenres are constantly lifted by harsh and almost industrial sounding guitar lines. With a husky black metal voice accentuating the darkest atmosphere, this is a crossover sound in every sense. It’s all great, but there’s better to come when, at the mid point, the band tease with more Fear Factory-ish sounds, before the doom-laden pace gives way to a heavy, chugging and almost industrial rhythm. The blend of intense rhythms and gothic atmospheres appears to present peak Fissures, and then everything stretches further to include occasional black metal vocals leading into an obviously Sabbath derived groove, punctuated by jarring rhythms topped by huge growling doom vocals. It’s almost as if the band set out to capture the best bits of Slomatics and force them into a terse musical marriage with a European melodic death vocal, before descending into a wall of feedback. For most bands, that would be enough, but there’s also an unexpected twist when a clean sounding coda offers hard strummed semi acoustic sounds and a jazzy bass solo that reinforces a melting pot approach. In some ways, these play as if the band had a couple of superb ideas they couldn’t bear to throw away, but they actually serve an important purpose in providing the listener with time to recharge and reflect before the next inevitable musical assault begins.

A little more straight ahead, ‘Long Term Death’ fills eight minutes with doom blues riffs where howling guitars take on a very prominent role, and deeper, sludgier grooves push forth the band’s love of an uncompromising sound. Realising that melodic death and black metal vocals aren’t called for – at least at first – Wyslocky summons a demonic growl that’s perfect for the job in hand, but the trad doom vibes are totally driven by Taylor’s ability to present the most intensive of bluesy sounds whilst drummer Lee Biles smashes merry hell out of his kit. There’s little here that takes doom metal forward, but it doesn’t need to. Its confident mix of Paradise Lost and Conan brings more than enough to hold its own, and for those who’ve constantly craved a dense, sledgehammer groove, it’ll be an instant favourite. Eventually, though, Fissures’ usual desires to mix things up comes into play, and Wyslocky unveils a black metal infused shriek that really clears the cobwebs, and musically, a harsher backdrop takes everything further towards extreme metal, before ‘The Quandry’ brings everything back down to Earth with a massively heavy thud. Repetitious guitar chugs immediately set up a feeling of tension, and everything drops into a classic doom/sludge hybrid where the riff is everything. As before, a slightly bluesy lead is on hand for a melodic hook, but it doesn’t last, and it isn’t too long before there’s a feeling of something more uncompromising at play. And sure enough, by the time the verse hits, everything slows to a funereal tempo and Matt unleashes a massive, uncompromising growl. “Worship my name”, he threatens, forcing us rather firmly into what feels like a Satanic sludgefest, somewhere between Conan and the Melvins at their most moody. At somewhere around the halfway mark, it feels as if its gone on forever. Luckily, for those able to sit tight for a little longer (somewhere between two minutes and a hundred years), the final movement presents one of the album’s greatest riffs when Fissures opt for speed over everything else, taking a fuzz bass and crashing rhythm to deliver a huge groove oriented coda that sounds like a hybrid of Limb and a super-charged Kyuss. It might be brief, but these final bars are the ultimate in uncompromising stoner grooves, almost worth wading through the previous drudgery for – and likely sounding better because of it.

In an inspired bit of sequencing, the album’s heaviest workout is followed by a much needed palate cleanser, and the acoustically driven ‘Primitive Grip’ introduces folk-ish/rootsy influences on a live sounding recording that allows for a very natural insight into Mark’s guitar playing, before the band brings out the big guns on a thirteen minute closer, ‘In Her Marble Realm’. For those who’ve made it this far, this marriage of extreme/progressive/doom metal reworks many of the band’s key traits, but does so in even more of a confident manner. Following three minutes of pure sludge, the style takes a sidestep into a Sabbath/Cathedral influenced doom, where Wyslocky’s complete vocal range is given free rein, but of particular interest, is how he and Taylor manage to work a couple of trad metal solos into a veritable swamp without them sounding forced. Dan’s bass work, meanwhile, is especially on point. In the final stages of a long musical journey, he presents an absolutely killer solo, where the recording is so clear you can almost hear the rattle of his strings. Every great band needs a rock solid rhythm section, and stripped of their massive bluster, this shows how Fissures have a really solid team in that regard. Although this album has such an intense volume at times it seems almost seems impossible to turn down, its worth cranking things up a couple of extra notches here – the bass sound is particularly impressive. Jaw-dropping, even. In terms of final impressions, things couldn’t have been planned any better.

There are waves of experimentation throughout ‘The Marble Realm’ that show Fissure of Riddles as being a cut above your average sludge band. They really understand how the inclusion of a few atmospheric passages or the occasional hint of prog metal invention can really lift a truly dense sound. Moreover, they’re able to convey that in a way that never truly detracts from the overall heaviness itself. For the more cerebral sludge and doom fan, this is an album that should definitely be investigated. Those able to give it their full attention will discover an underground jewel; even if it isn’t the kind of album you’d pull off the shelf every day, there’s plenty here that deserves to send this British sludge-making outfit further up the ladder of success.