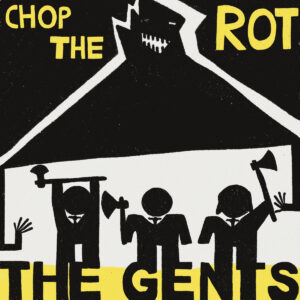 Taking the grubbiness of classic Mudhoney and injected it with the spirit of old school punk and a pinch of early Motorhead, German punk ‘n’ roll trio The Gents whip up a speed driven storm on their 2022 EP ‘Chop The Rot’. Although speed is often the key to bringing a genuine excitement to their material, also a great pleasure to be had when hearing the band approaching most of their work at full volume. This results in the kind of release that would appeal to a broad spectrum of punk fans.

By kicking off with the fastest number, ‘Dig A Little Deeper’, this release grabs your attention immediately. The Gents deliver a collection of riffs that sound like Duane Eddy played by Wayne Kramer and put through several distortion pedals, and although the driving riff suggests it’ll be everything, but the band manage to weave a semi-shouty vocal that follows a similar melody in such a way that the energy increases. It takes all of about three bars before everything settles into some top draw punk ‘n’ roll, and shifting into the chorus, everything intensifies further. Showing more of their straight punk credentials, a sharp and hard riff and shouted refrain suggests influence has been taken from the original American hardcore movement and bands like Circle Jerks, but there’s still a trace of a more more interesting rock band, and the use of gang vocals really gives everything an edge. After moving back into the main riff – sounding just as cool the second time around – the overall tone is superb, but what makes this truly work is its ability to sound like something you’ve known forever from somewhere around that second play. It’s tight, it’s lean, it’s noisy – everything solid punky fare should be, and the semi-raw production certainly brings the best out in a great band here.

Delving further into old punk and applying traces of early Black Flag to a storming rock ‘n’ roll riff, ‘Grandma’s Got A Headache’ works a brilliant bottom end guitar riff beneath a sneering vocal, and although it brings nothing new to the genre, the band’s sense of force is without question. The featured guitar solo – made up from almost bluesy descending notes – and a deep, rattling bass confirms a solid musical unit, and a band that understands that sometimes the tried and tested approach is more than enough to create a great punk sound, before the title cut slows down a little to explore some metal edged punk where a tough and simple riff rises and falls against a crashy drum part, showing yet more love for older bands like MC5. The way the lead pushes forth with a heavy wah-wah between the vocals often suggests that this isn’t just hacked out despite the semi-disposable sound, and a pleasing dirty chug at the heart of the instrumental break suggests the band are a cut above your average garage punks. In terms of chorus hooks, it isn’t as immediate as the other tracks, but a shouted refrain of “chop, chop, chop” used to lift the coda is bound to stick eventually, and the energy within the whole performance continues to show off a band who are more than able to clear the cobwebs when called upon to do so.

These three tracks are rough and ready without sounding cheap. They’re also on the good side of trashy and raucous without sacrificing strong, punky melodies. The dirty guitar tones are very much the highlight, but there’s also a lot of appeal in the shouty gang vocals that often lend the material its edge. In short, if you’re looking for some good, old school punk ‘n’ roll that leans further towards the punk, you really can’t go wrong here.